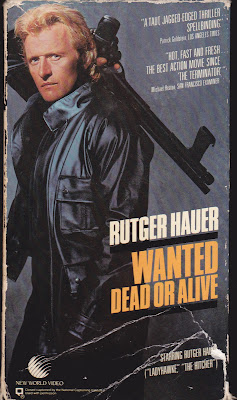 Nick Randall (Hauer) is an ex-CIA agent and bounty hunter. He is asked to track down an extremely dangerous and ruthless terrorist, Malak Al-Rahim (Simmons), who has been killing lots of people and only planning to do more damage. Randall will stop at nothing to track down Al-Rahim, especially after an attempt on his life kills some people Randall cares about. Will Randall succeed?

As you can see from the brief plot description above, the storyline here is pretty cut-and-dry, which isn’t necessarily a bad thing, but the movie should have been shorter, and with Rutger killing more goons. That would have livened things up. But as it stands, Wanted: Dead or Alive has some good 80’s atmosphere and un-PC moments. So that’s a good thing, and they tried to give Nick Randall a bit more character development than usual, which is also good.  He gets plenty of snappy lines and loves the harmonica, which mirrors on the soundtrack. He even has what may be the first car GPS seen on a movie screen. 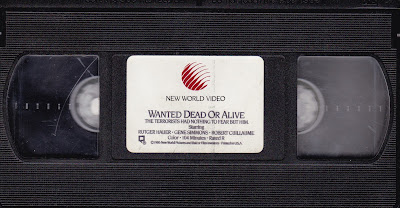 It was also nice to see Gene Simmons looking slick, and while he himself is Jewish, he plays an Islamic terrorist. The terror aspect of the film is still relevant, but this movie has too much padding and needed more action. Interestingly, in the movie theater scene, they are playing the movie “Rambo” - and while there are many Rambo references in many other 80’s and 90’s action movies, the filmmakers here should have known there was no such movie by that title at that time.

Naturally, it all ends in a classic Steam Factory shootout. So while WDOA has some good moments, the movie should have been tightened up and had some edge added to it. It’s not bad at all, but it’s not very memorable either.

Good review, Ty. I always thought the film was a little too slow as well. Great death scene for Simmons, though.

Thanks! Totally agree about that death scene...it needed more wackiness like that.

Yeah this was a little slow in parts, but still pretty decent, as for the Rambo thing, well that's what a lot of people call First Blood Part 2.

Loved this as a teenager, rewatched it recently and I still like it a little more than you seem to, it definitely could have been tightened up though.

Yeah, this was a little bit of a disappointment for me too. The story was too thin and Hauer didn't have much to do. A bit more action would have greatly improved it.

Venom: Agreed. Slow but decent. Rutger put in his usual good performance. Plus it is always fun to see Gene Simmons. Haha.

Jack: Totally agree with that. Just a little bit more action in the middle would have been perfect.

I like this one a lot. I admit the pacing slacks every now and then but the final scene is flippin' amazing!

The final scene was gold! We always love when the main bad guy blows up. Haha.

I've seen my fair share of offensive genremovies but this one takes the cake. It is probably one the most racist b-movies i've seen. It's really a vile little picture.

It is pretty racist, but that's part of the 80s fun...Gene Simmons at his best!