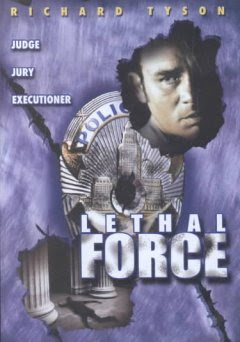 Thomas Carruth (Tyson) is a Texas cop who laments the “old days” when law enforcement didn’t have so much red tape involved and there were less confining rules. So he goes rogue, becoming the judge, jury and executioner all on his own terms. Apparently this doesn’t sit right with go-getting attorney Renee Alexander (Stafford), who approaches fellow lawyer J.B. Thornton (Owsley) about building a case against Carruth. Even with the help of Eddie Mills (Gault), catching Carruth is not going to be easy. So they slowly, meticulously do it anyway. Will they catch this Carruthless character? Can they fight through the Carruption? Find out today! (Actually, don’t...)

You’d think a Direct-to-Video movie starring Richard Tyson and Robert Vaughn called Lethal Force would be a surefire winner. However, it’s not very lethal and has minimal force. However, that’s the Corman-released title (others were Cottonmouth and Silent Justice) - and it seems to be a cynically misleading ploy to get suckers like us to think this is an action movie. It’s actually a TV-style drama about two lawyers building their case against someone. It’s nothing you wouldn’t see on an episode of Law & Order - and it would probably be done better on a Law & Order episode. The main problem is, by far the best and most interesting character is Carruth, and there are huge stretches where he’s nowhere in sight. And they could have made him a lot more evil. The non-Carruth scenes have no edge or bite to them. 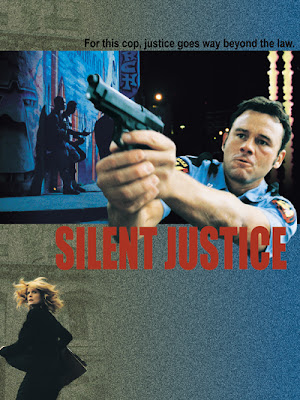 Carruth is a good role for Tyson, and we were wishing he would come back in a better movie. Incidentally, he resembles a cross between Martin Kove and Steven Bauer. Amazingly, this movie came out in 2002, but it looks like it’s from 1992. And seeing as how we were on Robert Vaughn watch, we noted how he doesn’t appear until 69 minutes into the movie. At that point it’s just a salvage job and it’s far beyond the powers of any actor to save the wreckage, but it seems Vaughn at least tried his best.

Sadly, Lethal Force is a dull, uninvolving legal drama that was cruelly mis-marketed as some kind of action movie. If you ever see this movie in any store, don’t take the bait. (Ty paid fifty cents at The Salvation Army for this on VHS - and that’s exactly where it’s going back). Let us act as guinea pigs for you. If you’re expecting action, avoid Lethal Force.

When I rented this film, I had it confused with another film by the same title, (the other Lethal Force is a pretty funny spoof of action films) I was dissapointed to say the least and I pretty much agree with your review, this a pretty weak and forgettable film. One Tyson film I would highly recommend is Big Bad Wolf.

This was very disappointing and weak. There is another movie that has a similar cover\plotline called Under Oath, with James Russo which was way better.

Enjoyed Big Bad Wolf too. He was good in that.