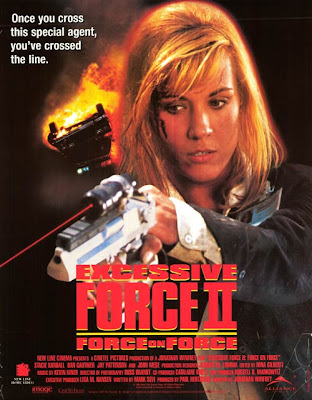 "Once you cross this special agent, you've crossed the line!"


Harly Cordell (Randall) is a highly-trained Special Forces warrior. She leaves her army base to do some investigating when she realizes the super-evil Lydell (Gauthier) is on the loose. They were once a couple when they were in the army together. But Lydell went to the dark side, and began doing deals with mobsters like Franco (Lauria). Lydell even shot Harly in the head at one point in the past, and she still deals with dizziness and disorientation because of it. Her cranial condition is going to make her quest for revenge even tougher. So after traveling through the seedy areas of L.A., the final confrontation ensues. How much force will be enough?

You might be surprised to know that there is a sequel to Excessive Force (1993). It’s in-name only, as T.I.G is nowhere in sight. While it may seem odd that the first one warranted a sequel, keep in mind there are THREE Crackerjack movies. T.I.G. must leave ‘em wanting more, but then others, such as Judge Reinhold, or, in this case, Stacie Randall, must take his place. But surely a Guinness world record must have been won here for “most times a single word appears in a movie title”, with an impressive THREE times for the word “Force”. What if there was a third film? Would it be called Excessive Force III: Force on Force on Force? While three times might seem like a lot of force, the movie itself is run of the mill, by the book action with nothing to make it rise above the pack. That being said, Stacie Randall as the lead is certainly attractive enough, but is she up to the standards of a Cynthia Rothrock? We say no...but maybe she wasn’t trying to be. Perhaps the filmmakers were trying to position her as an “anti-Rothrock”, or at least an alternative to her. The fact that Randall didn’t continue in the action world indicates her heart might not have been into the beating up and shooting of baddies. Shame, she might have come into her own later, especially if she had gotten a better project than this. But we’ll never know. But she does wear this indescribable silver outfit which makes her look like some kind of superhero, but for her it’s just everyday wear. She’s backed up by some good people, such as Dan Lauria, Tom Wright and the ubiquitous James Lew, who seemingly was in every 90’s action movie. We were happy to see him, and he even worked as a fight choreographer. Gauthier, who plays Lydell, was charismatic, and his sidekick Yates (Tatum) was...sleeveless, so there’s that, but the movie is so straitlaced. 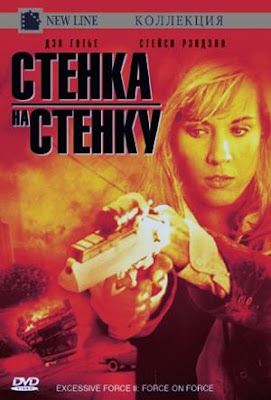 It’s a professionally-made product, and the New Line widescreen DVD looks nice, but the movie is just so perfunctory. Like it’s ticking off the boxes of what the filmmakers were told that action fans were supposed to like. But where’s the heart? Where’s the originality? Sure, the fact that the hero is a hot chick with a brain condition sounds novel enough...but it’s just not enough to keep the entire movie afloat. We really, truly WANTED to like Excessive Force II: Force on Force - the title alone certainly floats our boat - but the movie just didn’t have it.

We really were hoping for better here...but unfortunately, and sadly, Excessive Force II: Force on Force is the action movie equivalent of flavorless mush.

I gotta disagree with you on this one, I enjoyed this film and I really liked Rnadall in the lead.

Randall wasn't bad...we felt it was run of the mill.

Run-Of-The-mill? Perhaps, but still entertaining with some pretty good action. It is a shame Randall isn't as well known as Rothrock, though she was actually in a few other action films, she had a bit part in "Detour" she played a terrorist in the Demolition High(Die Hard in a school, I tihnk you'd enjoy that one more then Detention) and she was also the lead in "The Assault", which was really good, (basically a remake of Assault On Precinct 13 with a mostly female cast). She was also pretty good in Trancers 4 and 5. Unfortunately she also had the misfortune of appearing in some real stinkers like Evil Obsession, i've also heard bad things about First Encounter.

Have been away from blogger for a bit, good to be back. Love the review, I kinda still want to watch this one but I might be more in love with the title than anything. Thanks for the great review Ty.

Venom: There were some decent moments with Randall. Thanks for all the info! Will have to check out The Assault.

John: Happy you're back! You welcome. The title is great, the movie is not unfortunately.

Been thinking whether to pick this one up. Thanks for the warning Ty, I'll stick with the TIG original.

Your welcome! The original is the best. TIG rocked in that.

Haven't FORCE seen this one, but FORCE I remember it playing FORCE on HBO non-stop FORCE back in the day. For(ce) me, if it doesn't FORCE have Thomas Ian FORCE Griffith, for(ce)get about it.

LOL! That was one of our best comments. So much FORCE!

Haha! It is an amazing amount of Force!