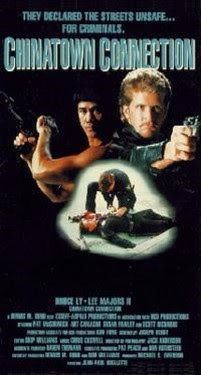 “If a cop ain’t got an attitude, he’s dead”- Warren Houston


Warren Houston (Majors II) is an L.A. Cop On The Edge or COTE for short. He has a serious attitude problem. Also he plays by his own rules. When batches of poison cocaine start killing off the local drug-taking population, Houston wants to find out who is responsible. But he is teamed up with John Chan (Ly), a Martial Arts expert with a thick Chinese accent. Chan is running an experimental program at the police precinct, where instead of suspending officers with anger issues, he teaches them Martial Arts moves in the gym. Sort of a cross between anger management and Karate class.
The latest recruit into the program is Estes (Camacho), an ally to Houston and Chan. They are searching for an underworld figure known only as “The Scarface Man”. I guess simply “Scarface” was taken. Will these unorthodox “Kung Fu Cops” get to the bottom of the CHINATOWN CONNECTION?

You thought you loved Lee Majors. You thought he was the only Lee Majors. You thought wrong. Not only is there a son to the great Keaton’s Cop (1988) star, but his name is not simply “Lee Majors” or even “Lee Majors Jr.” it’s Lee Majors THE SECOND. Kind of like Pope John Paul II. And not only that, in this movie he’s teamed up with not Bruce Lee, Bruce Li, Bruce Le, or (personal favorite) Bruce Rhee, but with yet another “Bruce”, this time Bruce Ly. Add Art Camacho and Brinke Stevens to the mix and you have a movie that should be a bit more well known, both for the cast and for the fun moments it contains.

Sure, the movie is plotted and paced weirdly, and maybe not all the punches and kicks connect, but so what? The Houston/Chan team-up (either by accident or design) actually avoids some of the “you don’t speak English” cliches we’ve seen many times in the past. They get along well together, as best evidenced when they’re both speaking with a drugged-out informant known as “PCP”. But the only acid on display is the wash in Lee Majors II’s jeans. Though it is curious that no one ever comments on John Chan’s super-thick accent even once. It’s all just taken for granted.

It should also be noted that the police chief is the time-honored WYC (or White Yelling Chief), and Houston is known as “That Crazy Cop” (kind of like “That Darn Cat”?) and that he hates Slime. He calls criminals Slime at least twice in the movie. He has an awesome fashion sense, from his mustache down to his high-top Nike’s. Additionally, it being the 80’s, he even, inexplicably, has to face off against a Ninja at one point.
Luckily his house is well-equipped with weaponry (this will remind watchers of The Office of how Dwight has various weapons hidden around the office). As if that wasn’t enough, one of the baddies is none other than Malibu, AKA Deron McBee. Sadly, it’s an uncredited role, but finally now we’re shedding light on it.

Despite (or, more accurately, because of) Chinatown Connection’s more amateurish qualities, there’s a lot to like about this movie. Released by South Gate to video stores in 1990, and featuring the song (which gets no credit so we don’t know who it’s by or the precise title but we think it’s called) “You Decided To Play”, Chinatown Connection is ideal for action fans that don’t take themselves so seriously.

Southgate sure does have some gems, there's also the Black Cobra films, Cartel, Omega Cop and Lady Avenger.

Cartel and Omega Cop are great...Still have to check out the Black Cobra films. Fred Williamson is the man!