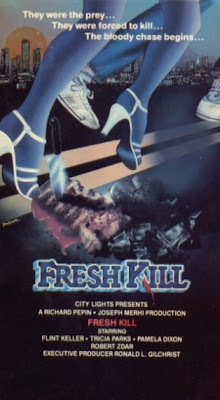 Allen Chester (Keller) is an aspiring actor who moves from his hometown of Chicago to Hollywood to pursue his dream. While he works on breaking into the movie biz, he works at a butcher shop. His co-worker is blonde weirdo Carter (Preston) who assesses his work performance by how many times he sneezes in people’s meat purchases. One night while waiting until midnight for the meat truck to arrive (is this common practice?), a mysterious woman pops into the shop and asks for Allen’s help. Her name is Leona Alexander (Parks), and it seems she’s trying to escape the clutches of criminal overlord Manny (Z’Dar). After accidentally killing some goons, the pair go on the run. Manny is especially mad because he believes Leona has two million dollars worth of his money and drugs. Meanwhile, Allen and Leona work through their mistrust issues and form a bond. Eventually Allen, Carter and a friend of theirs who is a street swindler act as makeshift mercenaries and stage a raid on Manny’s compound. Who will then become the FRESH KILL?

Fresh Kill is one of the better City Lights titles we’ve seen in terms of quality of acting, and technically as well it’s an improvement over past efforts. As we’ve discussed before, we find something inexplicably alluring about City Lights movies, and despite no-nothings bashing some of the more amateurish aspects of their output, we’ve seen almost all of them as of the time of this writing. Many of the CL regulars are in front of and behind the camera, and John Gonzales’ score is one of his best and helps the movie a lot. 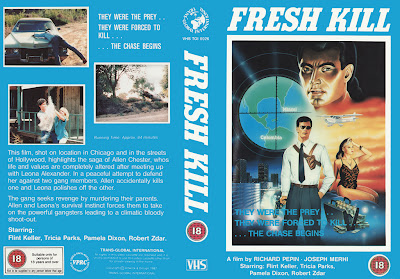 Flint Keller as Allen Chester (or is it Allen Chester as Flint Keller?) is actually a likable main character, as opposed to the unlikable central characters in City Lights’ Mayhem (1986). He even goes through a character arc. Like Allen Chester, The Flintster should have done more in his acting career. Another draw for this movie is the presence of the great Robert Z’Dar. It was an early role and he looks svelte. Better things were yet to come in his career, but he does add a lot here. Also adding to the strength of the cast is Steve Welles as Mike, who runs an airplane hanger. This man is an American hero, as well as an American treasure.

Besides Mike, Fresh Kill is filled with odd characters and off-kilter situations. This comes through in the scene when Allen and Leona go to hide out at Leona’s mother’s house, and she and her mother smoke a pipe while the three of them watch torture porn. It seems pretty awkward for Allen. And the way writer/director Joseph Merhi depicts L.A. as crime-ridden, even lawless is also very entertaining. Merhi once again seems influenced by the classic Film Noir era - but Fresh Kill was shot during the L.A. big hair era. The mashup is amusing. And while the film does get a bit boring before the climax (a very common problem), there is also some over-the-top violence to keep things afloat.

Featuring the pounding song “Lost In the City“ by Gonzales (sung by Paul Shortino) - not to be confused with L.A. Crackdown II‘s “Lost In the Night”(doesn’t every City Lights movie have a song like this?), we want to know when a CD is coming out of all these songs. After all, this one is a movie highlight, and even plays during the first couple of scenes in the movie! Also it should be noted that there is a trailer for Heat Street after the movie. Fresh Kill remains one of the better gems in the tennis bracelet that is the City Lights Canon. It probably won’t be to everyone’s taste, but there are those of you out there who will want to check it out, if only for Robert Z’Dar. You know who you are. Flint Keller, we hardly knew ye.