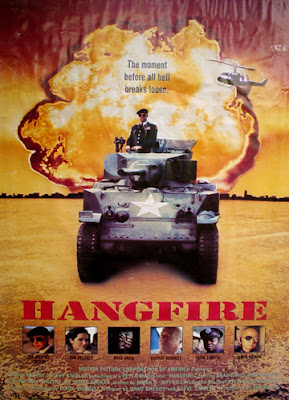 
Kuttner (De Broux) is an inmate at the New Mexico State Penitentiary. At his parole hearing, he is determined by the board, including by psychologist Maria Slayton (Delaney), to be an extremely dangerous psychopath.  During a freak accident involving a poison gas cloud that is a really stupid pretext for a prison escape, Kuttner, along with his eyepatchioed right-hand man, uncannily enough named “Patch” (Tolkan), kidnap a bunch of people  - one of which is Maria - and take an entire Western-style town hostage.

Maria’s husband, Isaac “Ike” Slayton (Davis), who is a Vietnam vet and also a town sheriff,  teams up with his buddy Billy (Foree) to take down the baddies. But the National Guard is called in, and their leader is the hard-headed Lt. Col. Johnson (Vincent), who doesn’t approve of Ike and Billy’s methods. Who will prevail: Johnson, the local cops (headed up by Yaphet Kotto who is insultingly only credited as “Police Lieutenant”), or the bad guys?

In 1981, The Rolling Stones released their song, “Hangfire”. Most people would agree that by that point in their career, they were past their prime. So it seems fitting that this movie under review today would have the same moniker as a less-than-fresh source. Hangfire - the movie - is a shameful waste of an incredible, once-in-a-lifetime cast. You might think, looking at the cast list, that you can’t lose. Unfortunately, we learned the hard way that you definitely can.

We’ve been burned before by movies with awesome casts that turned out to be not so awesome. The least punishing example being Lone Tiger (1999), the most punishing being Detour (1998). It’s truly a case of “too many cooks spoiling the broth”. Don’t be fooled by the stellar cast. It only makes you wonder: “Why would they all agree to this?” 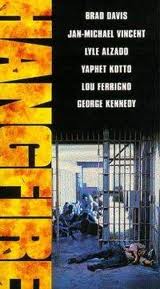 The talent of pretty much everyone in the cast is completely wasted in this cliche-ridden (in a bad way), lackluster, unfun, overly-serious slog. George Kennedy has a throwaway role as a prison warden. Nothing is done with it. Same with Kotto as the cop. Kim Delaney says almost no dialogue in the movie. JMV inexplicably smokes a pipe, which, sadly enough was a movie highlight. You usually don’t see the gruff, beret-ed, uniformed commander lighting up his meerschaum.

And here’s the ultimate waste: Lou Ferrigno and Lyle Alzado as prison buddies Smitty and Albert (respectively). They almost could have carried an entire movie on their own, but their scenes together are pointless and incredibly dumb. Along with JMV’s pipe, Alzado’s mullet is the only other bright spot in this otherwise lifeless movie.

The problem is, this movie is not well-written, and thanks to an almost total lack of character development, you really don’t care about what happens. Any one or two of the characters should have had time spent by the filmmakers on fleshing them out. But Maris splits the difference and spends no time on any. That’s the danger of a super-cast. Hangfire is so paint-by-numbers, and so painful to sit through, we coined a new term, “pain-by-numbers”.

Did we mention the similarities to the also-awful Fear (1988), the dank, dark lighting, and the annoying musical stings? A few humorous crossbow shots and Brad Davis prancing around in zebra makeup (presumably to hide from the bad guys?) isn’t enough to save this dud.

But what’s really insulting to the audience are the unspeakably horrendous gun muzzle flashes. Here’s where it gets to “Sci-Fi channel original movie” territory, with crudely-superimposed “flashes” that aren’t even laughably bad, they’re just bad. Muzzle flashes are one of the joys of action movies, and Maris duly crosses that off his “I made this suck” checklist. Perhaps fortunately, it’s not like these crimes against muzzle flashes ruin an otherwise good movie.

In this case there’s nothing to ruin. So structurally it’s no harm no foul. Visually it’s just foul. This is the fourth Peter Maris movie we’ve seen to date (though we’re not planning on seeing any more) - the others being Terror Squad (1988) - which featured fan favorite Chuck Connors - Ministry Of Vengeance (1989), and Diplomatic Immunity (1991). Let’s put it this way: we’d trade this whole cast for one Chuck Connors.

The excellent cast is just a distraction - even a misdirection in true grifter style - to the fact that Hangfire is a movie you must avoid.

I disagree, I thought this was a pretty decent filmwith some good action scenes, I didn't really notice the lack of character development, I also thought Fear was pretty decent, mostly because of Frank Stallone's performance.

Definitely agree that Frank Stallone was good in Fear....he was the best part.

He should have been in Hangfire. Might have saved that one!

You thought Fear was bad? Try watching Easy Kill, even Stallone couldn't save that disaster, one of his best films was Terror In Beverly Hills.

Haha! Will avoid that one...always wanted to see Terror In Beverly Hills...will try to check that out soon.