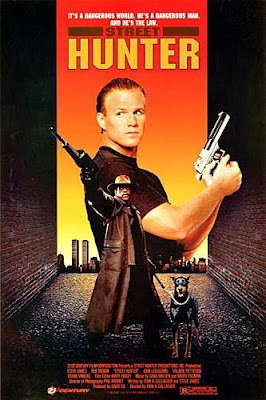 Directed by: John A. Gallagher

“The more people I meet, the more I like my dog” - Logan Blade


Logan Blade (James) is an ex-cop turned bounty hunter who always gets his man. He drives around New York City in his tricked-out van, and always has his trusty dog Munch by his side. Blade gets caught up in a gang war between the Diablos, led by the energetic Angel (Leguizamo) and the Italian mobsters led by Don Mario Romano (Vincent). But Angel and the Diablos (interesting name choices) have an ace up their sleeves: the emotionless, rigid, ex-Special Forces mercenary Col. Walsh (Brown), who demands victory at all costs and is a history buff constantly referring to historical battles. Things come to a head when Blade’s girlfriend Denise (Pettiford) is kidnapped. Add to this his many troubles with his old police contacts, and it sets the stage for a serious confrontation with the STREET HUNTER!

Street Hunter is classic 90’s action as we all know it and love it. Plus it features a top-billed Steve James, finally. James even co-wrote the screenplay. We’ve always touted his work, and this is just further proof of our contention that he was one of the best and most underrated action stars of the day. He gets a great introduction, and there are plenty of shots of him looking cool and/or saying cool things. In case you ever forget how cool he is, his name is Logan Blade. So James’ coolness factor is turned up to 11, and why not? It’s his project. He even wears a Jack Abramoff-style hat throughout most of the movie. And lest we forget his duster coat with sleeveless shirt underneath. Reb Brown as the baddie provides the ultimate nemesis for him. This is one of our favorite Reb performances, he’s just great as the history-loving killing machine, and the movie wastes no time giving us his famous yell. 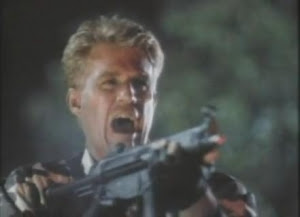 We enjoyed the New York City settings, and there are plenty of shots where the World Trade Center is clearly visible. It certainly brings us back to a certain point in time, especially when Blade says “Now it’s personal”, which in 1990 - hard as it is to believe now - wasn’t the cliche it is known as today.  It’s thanks to movies like Street Hunter that it became the classic cliche we all take for granted these days. If we have any complaints about the movie, it would be that it is a tad bit too long - if the film had been tightened up by only a few minutes, it would have helped and made it seem more intense. Also the movie suffers when Reb Brown isn’t on screen. We realize he can’t be in every scene of the movie, but his performance and presence is so magnetic you want to see more of it.

Thanks to the presences of Reb Brown and Steve James, two titans of the DTV industry, and some better-than-average acting, Street Hunter comes out a solid winner. It’s a consummate example of 90’s video-store action so go and see it.

Agreed with your review, it's a damn shame Steve James had to leave us so soon, he was also great in Riverbend.

Thanks. Definitely agree. He will be missed...he is at his best in this...will have to re-watch Riverbend soon.

This looks amazing. Another Reb I need to get!

It is really awesome! Reb and James at their best. We know you will love it.