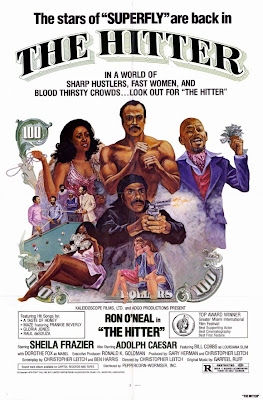 
Otis (O’Neal) is a down-on-his-luck ex-boxer who is trying to escape his past and start afresh with a new life. As a drifter, he ends up in Baltimore, and he crosses paths with pool hustler Louisiana Slim (Cobbs). But he’s going to wish he hadn’t. Meanwhile, he also meets an older gentleman named Nathan (Caesar), a man who has lived his life as a slickster, a fast-talking hustler who’s always looking to make a buck and can talk his way into - or out of - any situation.

Nathan offers to be Otis’ manager and take him around to the bare-knuckle fighting circuit. Otis reluctantly agrees, and along with Lola (Frazier), a prostitute also seeking a better life, the three of them hit the road encountering different trials and tribulations. But just when things are looking up, the specter of Louisiana Slim rears its ugly head again, and Otis must face his fate - a fate that could get everybody killed. What will happen?

The Hitter is underrated, understated, and an entertaining and worthwhile movie. Notably, it’s one of the first - if not THE first - Punchfighter. Back in 1979, crowds yelled and held their cash in their hands as two men punched each other without gloves. Seeing as how the genre is still going strong today, although crud like Never Surrender (2009) is a far cry from the nuanced performances herein, The Hitter can legitimately be called a Punchfighting pioneer. 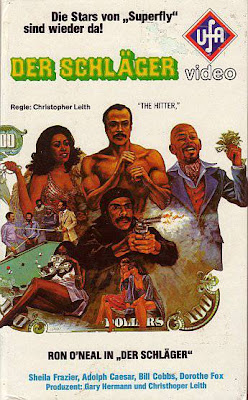 Of course, since the genre was still being born and finding its legs, the formula wasn’t yet perfected at this time - in fact the first half-hour of this movie more resembles a sex comedy than a Punchfighter. Even on a technical level, there are some issues, as the boom mic is painfully obvious not just in one scene, but in many scenes.

But the cast is of a very high quality, with O’Neal, Caesar, Frazier and Cobbs making this more a gritty, realistic character study than anything else. Future Punchfighters such as Last Man Standing seemingly took a page from The Hitter’s playbook.

Helping the movie immensely is Garfeel Ruff’s soundtrack. It’s truly excellent, and on top of having a winning title song, individual characters have their own songs, where the lyrics are about them. It’s novel, it’s funky, and the songs are very well-performed and catchy. There was a soundtrack that was released on LP back in the day, but someone really should reissue it on CD. Come on Dusty Groove, where are you on this one? 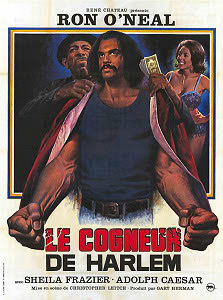 The great Ron O’Neal reminds us all just why he’s so great with this one. He’s a trained actor who can also Punchfight. That’s rare. He has a cool hat, a very cool coat, and of course a cool attitude as well. He’s much better here than he is in Super Fly (1972), but The Hitter doesn’t get any of the attention. As Far as Adolph Caesar, he’s superb as Nathan. He’s more than the folksy comic relief we believe him to be at first, he later shows true depth. And we just knew him from the Bruce Lee cash-in The Dragon and The Cobra (1980). In an interesting coincidence, Caesar says here to a Karate fighter, “You may not be Bruce Lee, but he did it all with mirrors anyway.” This links Adolph Caesar to Bruce Lee in TWO movies to date. Weird, eh?

But The Hitter is more than just a “Blaxploitation” movie, it’s just a solid movie with good performances that transcends that term. And it’s from the director of Border Cop, of all things.

It has that great 70’s drive-in feel, and anyone wishing to see the origins of Punchfighting should check this movie out.

"Le cogneur" seems like an odd translation to me, since that really means THE KNOCKER... but then again, the French translation for movie titles is usually pretty hilarious.

The Hitter is pretty decent. Would be interested in your take on it.

Totally agree about Trained To Kill. He had a nice role in that. Review coming soon.

Great review. Just picked this up recently. Will check it out, it looks wicked....

Thanks! That is cool you just got a copy. Definitely come back and tell us what you thought after you watch it.