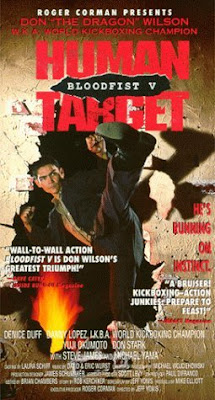 
Jim Stanton (The Dragon) is a thug working for a crime syndicate...or is he? After a gunshot wound to the head, Stanton loses his memory. While trying to put back the pieces of his life, he runs into Candy (Duff), a streetwise young woman who seems to share Stanton’s concerns about what his past life may have been. Soon they go on the run, trying to figure out why people like Marcus (James) and Agent Blake (Stark) are inserting themselves in, and disrupting, their lives. After many twists and turns, Stanton gets to the truth...but will it be too late?

We love Don “The Dragon” Wilson and Steve James, so naturally we were excited to see this movie. Unfortunately, in our opinion, it’s one of the weakest in the Bloodfist series. The plot is so disjointed, it’s impossible to have any investment in the characters and their plight. It just adds layer upon layer of dumb, unwarranted plot twists, like some nonsense about plutonium once we’re already deep into the movie. It falls into the same traps many movies fall into, with an annoying kid/woman, this time the Denice Duff character. From a visual perspective, it’s way too dark and pseudo-stylish. We’re glad you were trying to dazzle us with your style, but we can’t SEE anything, so what’s the point? The low budget is plainly obvious in threadbare set design of just blank walls with no decoration.

We’re truly sorry to be so harsh, that’s not normally “us”, but we’re disappointed. There are some positives, however: Joe Son yelling and shooting a machine gun, the Steve James/Don The Dragon fight which was nice to see, the musical theme which sounds exactly like the MASH theme song “Suicide is Painless”, and the fact that this is an ideal role for Don - because of his amnesiac status, he can look as confused, stunned and out-of-it as he wants, and it actually works towards the plot. But sadly, there’s no escaping the fact that this movie is a waste of Steve James’ talent (and heartbreakingly, his last movie role before his untimely death) - and even Don’s awesome long hair doesn’t last and he gets a haircut.

Although Don forgets everything, thankfully he doesn’t forget how to do Martial Arts. That part of his brain remained intact. And while Joe Son is credited as “Beefy”, no one ever calls him that on screen. So many wasted opportunities. Well, except for the time-honored opportunity Don takes to get unnecessarily shirtless, an opportunity he seems to take as often as he can. But either because this movie has a conscience, or because it was Corman policy, the movie doesn’t go on too long, it’s around 80 minutes. So there’s some mercy there.

Also check reviews from our buddies The Video Vacuum and DTVC!

I thought this was actually one of the better entries in the series, and I didn't find Duff annoying at all, I agree that James could've been better used though. For me part 3 was the weakest as that one just kind of dragged.

James was underused...Don and Steve should have teamed up to get baddies.