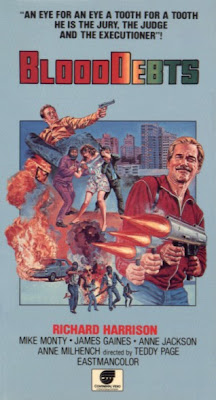 
Mark Collins (Harrison) is a Vietnam vet whose daughter, Sarah  (Miles), and her fiance, are both shot dead by thugs.  Taking matters into his own hands, he searches all over the Philippines to find and execute the culprits. But while he was carrying out his revenge missions, he was being watched by two mysterious figures, Peter (Gaines) and Bill (Monty). They like his style so much, they hire him to kill some more criminals. They even team him up with a former mob hitwoman named Liza (Milhench). You’d think Collins would be in hog heaven, now being paid to do what he loves best. But all is not as it seems, and after some twists and turns, we truly see who has to pay up on the BLOOD DEBTS...

This movie kicks off with what might be one of the best openings ever. We certainly won’t spoil it for you, but it sets the scene perfectly. But then, why wouldn’t it - this is a gem from fan-favorite director Teddy Page, a man known for killer openings. He directed Phantom Soldiers (1987) after all. But here he reunites with his Fireback (1983) stars Harrison and Milhench and the results are silly fun at its best. His use of slow motion, seemingly one of his trademarks, is on full display here. 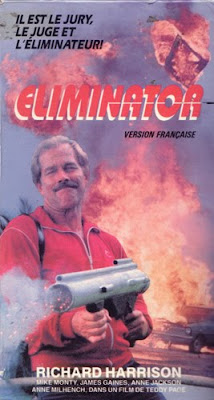 Funny dubbing, classic clothing, funky music, and that timeless Filipino sense of incoherence reign, and these are all the things that make a great time in front of the old VCR. The movie is clearly inspired by Death Wish (1974) but it takes the formula in some interesting directions. Plus, Harrison’s wardrobe, the staple of which seems to be “track suit with no shirt”, can best be described as the “Casual Bronson”. After all, you want to be flexible and comfortable if you’re tracking down and killing large numbers of people. Harrison is credited with being a co-writer of the movie, I wonder if any of that was in the script? And did we mention the dubbing? 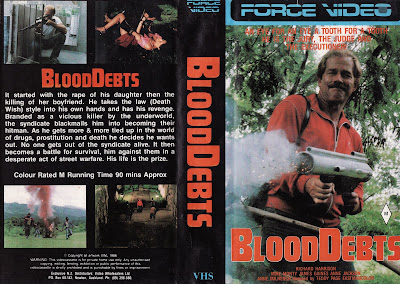 It was nice seeing Harrison in a non-ninja role, and there’s even a scene at a liquor store called “Harrison house of wine”. Is that just a coincidence? His foil, Ann Milhench, is beautiful as Liza, pronounced “Leeza”, apparently pre-dating the meteoric rise of talk show host Leeza Gibbons. Milhench has only been in six movies, and we’ve seen four of them (this and the aforementioned Fireback, plus Nine Deaths of the Ninja (1985) and the awful Sloane (1986). ) 1985 was a great year for her, as she did half her career in that golden year. It should also be mentioned that Willie Williams has a small role as Julius, Collins’ informant and confidante.

You’ve just got to love Continental Video for releasing this. Just for the two wacky on-screen title cards seen in the movie, it’s worth seeing. For the sillier side of the revenge drama, do check out Blood Debts.

Have you seen Final Reprisal? It was Gary Daniels very first film role.

Always wanted to see that! It's hard to find.

This slab of rudeness is on You Tube, the full movie! You guys weren't lying about the opening scene either, the kid running in constant slow motion and getting wasted was too much, even for a jaded action bum like me.

Glad to see it's on Youtube...that way more people can experience the magic of Blood Debts!

Got this one on tape too. Watched Fireback on the weekend and it was good too. Phantom Soldiers is still my favourite Teddy Page film.

We need to make "Casual Bronson" the fashion look of 2013! Love it!

Exploding Helicopter: Haha! It's a trend that's hot with all these kids these days.