Deep in the jungles of the Philippines, an evil band of baddies is attempting to overthrow the government. The group is led by the dastardly Kalamot (we’re just guessing on the spelling). As part of their nefarious plan, they kidnap a bunch of people, including a local Governor. In response, a commando team is assembled to rescue the hostages. Led by a man named Freddy, he is joined by Elmer, Jose and Brandon as an elite team of machine-gunners and Martial Arts fighters and the only people who can successfully execute this mission. Also a girl named Jasmine has been kidnapped by Kalamot and she holds a special place in the heart of one of the commando team members. Will the commando team be successful in extracting the hostages and neutralizing the threat to their country? Or will Kalamot prevail? Find out today!

When the title for the movie first comes on screen, and an animated spray of bullets hits it, you know the filmmakers have their hearts in the right place. For a low-budget jungle blow-up/shooting movie from the Philippines, Death Raiders is surprisingly crowd-pleasing. Yes, it has your standard exploding huts, but there’s some nice humor to keep the audience afloat, including some Martial Arts scenes infused with a certain light touch that is very amusing. In the same way our weather reports say things like “cloudy with a chance of rain”, in the Philippines, it must be very common to hear things like “sunny with a chance of exploding huts”. They’re that much of a daily occurrence.

Because it was the 80’s, the villain has a red imitation-Kangol hat that makes him look like an evil Filipino LL Cool J. There are plenty of Members Only jackets and open-necked, wide-collar shirts on display as well. There are multiple scenes at a disco, which we always love seeing. Thank goodness disco didn’t die in other countries around the world like it did in the U.S. There are also the prerequisite waterfall shots when outdoors. 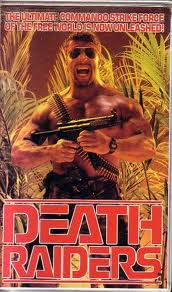 While the DVD is shoddy at best, and even is an unmastered copy directly from a VHS (complete with tracking issues, making it one of the only DVD’s out there with VHS-style lines that you cannot fix - didn‘t anybody watch this before releasing it?), Death Raiders is still worth seeing, especially if you have a penchant for Filipino jungle actioners. It’s actually one of the better ones we’ve seen, because, as far as we know, Cirio Santiago had nothing to do with it. There is a VHS available, with a silly cover with a dude who is not in the movie, which is always fun.

We say go forth and raid some death if you ever get the chance, or can figure out what that means.

Also check out a review from our buddy, Paul Cooke!

Filinpino war films are almost always worth a watch!

We agree and this one certainly fits the bill.

Haha, I have that American VHS in the big clamshell. Best cover ever.

Nice! It is a killer cover.