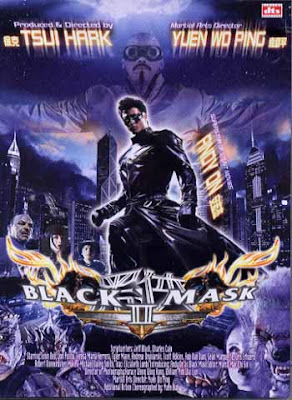 Moloch (Bell) and King (Polito) run a wrestling federation with a stable of “wrestling superstars” that include Thorn (Mane), Iguana (Bryniarski), Claw (Van Dam), Wolf (Erhuero), Snake (Mukes), and Chameleon (Lords). However, thanks to some DNA modification, he’s giving them the power their character might really have, but in a wildly mutated fashion. But now they’re running wild. Black Mask (On) not only has to stop them, he’s got to race against time to correct his own genetically-related problems. He’s going to need the help of Dr. Marco Leung (Herrera), and a young boy, Raymond (Marquette) that looks up to Black Mask because he saved his life from a rampaging evil wrestler. Pulling all the strings is evil puppet master Dr. Lang (Adkins). Black Mask sure has his hands full this time!

Okay. Anyone who reads this site knows how we feel about CGI. We think it’s the scourge of the movie industry and all traces of it should be wiped from the earth. It does nothing but ruin movies and make them look bad, only serving as a crutch to lazy filmmakers. Meanwhile the arts of makeup, monster effects, stunts, and Martial Arts - typically the things CGI is replacing - fade further into the distance. And while we’re not changing our stance anytime soon, we still liked Black Mask 2. It has CGI in seemingly every scene, but this movie is so wildly silly, we don’t really care. 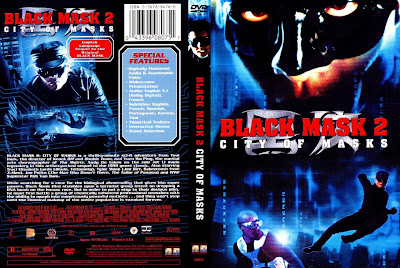 What the filmmakers were obviously trying to do was make a live-action comic book. In 2002, CGI was still relatively new, so the adventurous Chinese makers of this movie decided to try to use this new technology to advance their vision. While it doesn’t always gel, it’s done so un-cynically and with such verve, we’re willing to give them a pass.  Director Tsui Hark, who we’re a fan of, brings that off-kilter, kinetic style and plenty of cockeyed angles, as well as a zooming, constantly in-motion feel to complete the comic-booky fun. We liked the idea of combining ideas from the worlds of wrestling, comic books and genetic engineering (!)  - we felt that was creative and original so we’ll look the other way at some of the dodgier aspects of this movie. 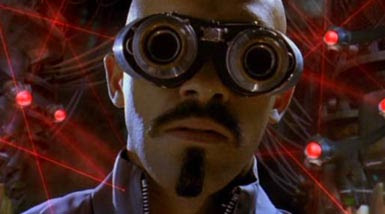 On top of that, there are actual Martial Arts fights, as well as wire-fu and more traditional stunts, all overseen by the great Yuen Wo-Ping. And though this was Andy On’s debut film, you’d never know it. He completely holds his own with the cast of more experienced actors. Joining him as the Kato-like Black Mask are fan favorites such as Rob Van Dam (Bloodmoon, 1997), Tobin Bell (Best Of the Best 4, 1998), and Traci Lords who looks...odd...and we prefer her in things from her classic non-porn DTV era such as A Time To Die (1991), Raw Nerve (1991), and Intent To Kill (1992), but she did liven things up in an already pretty lively movie. Super fan favorite Scott Adkins is unrecognizable as Dr. Lang, a character that looks like it wandered off the set of a Jeunet & Caro movie. But we did appreciate the presence of Adkins, as we usually do.

In all, if you’re charitable enough to forgive its trespasses, Black Mask 2 is a silly good time.

Great review. I've been meaning to get around to this one for ages. The first Black Mask was pretty good but I heard this sequel is very different, very... silly.

Didn't realise Adkins had a role. Definitely on my hitlist now.

It is a complete 180 from the 1st one...very goofy and weird...but still worth-watching...Adkins is almost unrecognizable in this. Haha.

I don't think CGI is the "scourge" of the industry at all and I certainly don't think it should be wiped out as it can look really impressive if done right.

Enjoyed this film though not quite as much as the first one.

BTW, I don't think CGI automatically "ruins" films and don't agree that it's always a sign of lazy filmmaking.

In our opinion, It depends on the movie, for Black Mask 2, there really is no reason for all the CGI...kind of distracting. Still a decent movie, but some of the effects were silly...especially the Traci Lords stuff.

I didn't enjoy it as much as you guys, but some of the crazy crap in this movie is laugh out loud funny.

Agreed. All the wrestling stuff was hilarious.