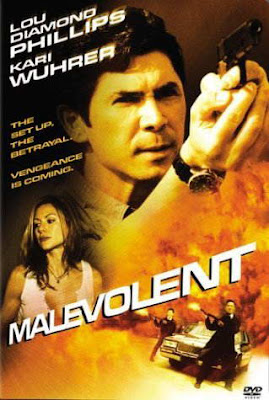 Jack Lucas (LDP) is an LAPD cop on the edge. Putting him even closer to the edge of the edge is the fact that a psychotic criminal mastermind is trying to frame him for a series of murders. The obnoxious and annoying Oliver “Ollie” Chadwicke (Ballerini) has it in for Lucas and is going to slyly and shrewdly send him up the river. Fighting for his life against the bogus charges actually perpetrated by Chadwicke, Lucas must use his wits to defeat him at his own game. Teaming up with a stripper with a heart of gold, Jessica (Wuhrer), as well as his father, Warren (Argenziano), Lucas must not only defend himself against Chadwicke, but from the mistrust growing amongst his co-workers. Especially with Captain Pruitt (Bauer) breathing down his neck. Will Lucas get justice?

Malevolent is a surprisingly solid and entertaining cop drama/thriller. It was smart putting LDP in the lead role, because he can easily carry a movie like this with his charm, charisma and acting ability. You could even say this is the continuing story of Jeff Powers from Extreme Justice. This isn’t really an action movie, in fact all of the action was edited in from The Corruptor (1999) and Marked For Death (1990). Anyone who has seen those movies will surely recognize the footage. But at least Malevolent is open and honest about it, in its own way: both footage sources get large, easy-to-read screen credits at the end of the movie. Other DTV items don’t do that. They try to hide their patchwork nature. So we give the movie credit for its openness. 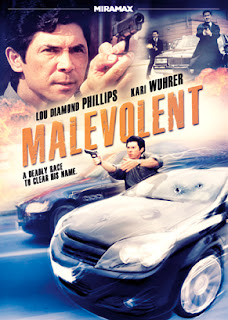 You have to take this movie for what it is, it’s not going to change the world but it’s really not bad either. In its quest to be gritty, or perhaps different, there are some horribly (intentionally horribly) edited sequences that are trying to be “cool”. If the movie was just edited normally, that would have helped. Plus there are some highly cliched, even stereotypical characters, such as Lucas’ partner Carla, played by Gwen McGee. But Ballerini did a great job as the baddie, he really makes you hate him. It’s always nice to see Kari Wuhrer, we were happy she was on board. It was also cool to see Jack McGee, of The Quest (1996) fame as the bartender. Steven Bauer should have had more screen time as the captain. Also, Simon Rhee is credited as one of the stunt players.

LDP even wrote the lyrics for the movie’s most memorable song, “Pray For Dawn”, a bluesy-type number. He should get more credit for being multi-talented. Fans of any of the cast members involved, DTV cop dramas, or fans of stock footage (we know you’re out there), or anyone with some spare time on their hands might want to check out Malevolent.

Sounds interesting, i'll have to check it out. Marked For Death footage was also used in the Antonio Sabato Jr. film "The Chaos Factor"

That is also interesting the used Marked For Death footage in the Chaos Factor...i wonder what sequence?

You know, I had no idea they did "copy and paste" jobs with action sequences for other films until I saw Badass recently. I think that's just crazy! lol. Buuuuut, this actually sounds like a good watch, and LDP is always fun. Great review!

Thanks! LDP is solid as usual...A lot of DTV flicks in the 90-2000s used stock footage, mostly directed by Jim Wynoriski...Extreme Limits with Treat Williams has a ton of ripped off footage from The Long Kiss Goodnight and others.

You know what's funny? I just saw a documentary on Netflix about Jim Wynorski called "Popatopolis" and he talks about how he himself has used stock footage too. Ha ha!

I just can't get over how that can be okay though. lol. Directors like Renny Harlin for The Long Kiss Goodnight and Dwight H. Little for Marked for Death worked hard to put those sequences together. I'm shocked studios let other filmmakers use them for other films. I don't know why it bothers me so much but it does!

Yeah, those "stock footage" films are kinda funny, it's always interesting to see how the integrate the footage into the plot. BTW, BadAss was a really good movie.

RobotGEEK: It is really weird and always thought it was irritating especially in Gale Force with Treat and they used Last Action Hero footage in the beginning.


Venom: It's always funny when you can spot the footage...makes a great game with your buddies. "Hey... that's from T2!" Will have to check out Badass.

First, I must completely agree, it is always nice to see Kari Wuhrer.

Second, outside of the Transformers incident, I had no frickin clue that action sequences were cut and pasted! That's wild.

And lastly, I wish LDP had got a better break in cinema. He is a charming dude, for sure.

Got to love Kari Wuhrer. It is a very odd but funny thing to cut and paste action scenes onto other movies...another example is Rangers with Matt McCoy...lots of stolen footage from Navy Seals. Haha.

Definitely agree about LDP! He has always been a solid actor...Renegades, Extreme Justice, The First Power and Striking Range are a ton of fun thanks to him.

Don't forget "Bats"! I always wanted to see LDP star in a remake of Billy Jack.

Haha, never seen Bats!...is is worth watching? Good idea about the Billy Jack remake. LDP is a perfect choice.

Bats is definitely worth watching, it's a cheesy fun "nature gone amok" film, it also got a sequel that premiered on the Sci-fi Channel "Bats: Human Harvest"

According to the video store literature of the time, "Bats will fly off your shelves!"

I agree with all the comments but as Ty pointed out here, most of the stock footage actually complements the movie. I do agree that Steven Bauer could've been in the film longer & is just regulated to a cameo going "Sorry, bud, I got to take your badge and gun, it's the rules."

Since The Corrupter was such a recent film at the time and had I not read IMDb's trivia section, I would've never known the opening car explosion was taken from that segment but it actually is seamlessly blended together (although this recent DVD cover now shows a croped image tof the two gunmen from that other film).

The Marked for Death segment is bad because it has no sound and you can clearly see Steven Seagal & Keith David in the car but since it's very brief and near the end of the film, it's forgiveable. The film works overall because despite a limited budget, you could easily see it appearing on cable TV or your local theater since it's got solid cinematography and a straightforward action storyline. It doesn't come off as a movie that's only enjoyable in a DTV sort of way.

If you want "Good" Jim Wynorski and more of the fun to be had with Rangers, check out his other film Militia with Jennifer Beals, Stacy Keach and Dean Cain. You'll see some Delta Force 2 footage but it works in the film's favor and you might even like some of the late 90s Daniel Baldwin-Richard Tyson vehicles.

Always wanted to see Militia\Rangers for the stock footage of other movies. It's always elicits some laughs. Wynorski's Gale Force takes footage from Last Action Hero at the beginning and it's hilarious. There is a comparison on Youtube.