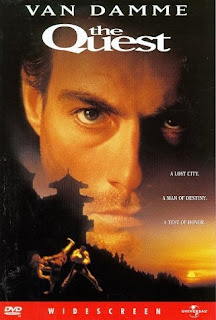 Set in the 1920's, Chris Dubois (Van Damme) is a street performer who wears clown makeup, a funny hat, and walks on stilts for a living. Adventure finds him when he ends up a stowaway on a boat heading to mysterious Muay Thai Island. There he learns martial arts, and, later in Tibet, meets the charming Lord Dobbs (Moore) and his assistant Smythe (McGee). It is around this time that Chris seeks to be involved in Ghan Geng, a secret underground fighting tournament. The winner gets a huge golden dragon, so Dobbs has a stake in Chris winning, as he wants the Dragon.

Fighters are invited from all over the world , and America is represented by boxer Maxie Devine (Remar). Chris must take his place in the tournament and defeat the sinister Khan (Quissi) to win it all. Also, there's some mild romance with the prerequisite female reporter Carrie Newton (Gunn). 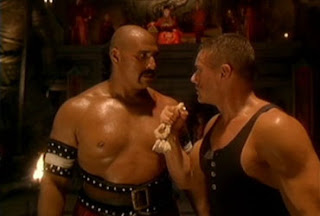 Van Damme does a solid, professional job with his directional debut. Having co-written the film with Bloodsport (1988) dude Frank Dux, you pretty much know what to expect - but this movie is rated PG-13, so it was clearly trying to bring the Punchfighting genre some mainstream acceptance. With its slick Hollywood look and booming, sweeping score by Randy Edelman, the final product is perfect for 13-year olds, presumably its target demographic.

Interestingly, the movie is a period piece, and plays like a prequel to Bloodsport. Instead of The Kumite, It's Ghan Geng. Van Damme tries on a number of personas  from "Old Man Van Damme" to "Van Damme The Clown" and many things in between. The presence of Roger Moore adds class and respectability to the proceedings, and James Remar of Quiet Cool (1986) fame stands out as Devine. He's always worth seeing. Janet Gunn from Night Of The Running Man (1995) and The Sweeper (1996) is the eye candy but not much else. 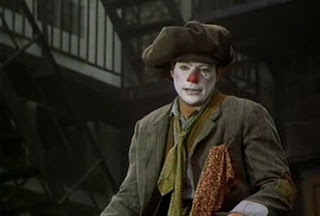 It's important to remember this was when video games like Mortal Kombat and Street Fighter were at the peak of their popularity. So when the Ghan Geng section of the movie begins (pretty much the last half) - the plot just STOPS. It's just one fighter from one country facing off against another fighter from another country. It gets repetitive and pretty numbing after awhile. Other Punchfighters don't do this.

They vary the Punchfighting scenes with other plot-based stuff. Not so here. Plus the fact the movie is kind of on the long side doesn't help matters. What The Quest should have been is an 80 minute R-rated Punchfighter. Simply cutting the length but adding more violence would have helped immensely. But they weren't going for that audience, unfortunately.

The Quest is more of a big "adventure" film where characters are seeking a "lost city" and many countries and time periods are represented. This might be a good way to start younger viewers on a career of watching Van Damme movies\action movies\Punchfighters but only Van Damme or perhaps Roger Moore completists need apply.

Yeah, I remember watching this in the 90's, presumably sometime after it hit the shelves of my local video rental store. Not good, but not terrible. Just the very definition of a 'meh' movie for me. And that's kinda disappointing when I consider it has a holy trinity of actors I really dig: Roger 'Eyebrow Arching' Moore, 'The Muscles from Brussels' JCVD, and 'Mr. Underappreciated' James Remar.

I have no idea why I came up with monikers for those actors to make them sound like pro wrestlers... but I did.

Can't agree more. If this was geared for adults who liked Bloodsport instead of children, this would have been a solid action film!

This film was just awful! Somebody should've told Van Damme that he had no business directing, the fight scenes weren't the least bit exciting and the story was really thin and not at all involving, this film is nothing more then an ill-fated retread of Lionheart, only without any of the things that made that film good. Van Damme didn't look he put even the least bit of effort into his acting, and all the other actors looked bored and sounded like they were reading their lines off cue-cards, this film makes Nowhere To Run look like Universal Soldier by comparison!

The fight scenes became really boring. If Van Damme directs again, he needs to do a straight up action flick like Hard Target!

Interesting. I never watched this one; now I know why.

Yeah, it's understandable you haven't seen this one. If you are going to overlook a Van Damme movie, this is the one.

I'm not a fan of this one, but the wraparound scenes are great. I always wanted a sequel featuring nothing but the old-age make-up Van Damme mentoring a younger fighter. If we wait any longer, he won't need the make-up.

Haha, so true! Hmm, The Quest II would be an interesting idea.

Just out of curiosity, why did you give this film 2 stars? Your review reads more like a 2 star review.

And Roger Moore is pretty much great in anything he does. I'd be interested to read your take on NORTH SEA HIJACK (which pre-dates the DIE-HARD genre by about 8-9 years).

Hoaks2: The Quest is just ok. It could have been so much better.

Venom: The reason we gave it 2 1\2 stars is for Roger Moore and some of the fighting sequences, but the last half is completely boring.

Lee Nicholson: Hmm, interesting. The BBFC must be more strict than the US when it comes to Van Damme violence. We will have to check North Sea Hijack out. Thanks for the suggestion!

I watched this back when the blog first started, then found out it had a theatrical release (I'd forgotten that), so I ditched it. I think Roger Moore is good to elevate a movie past the usual doldrums, and he did that here.

We are in agreement on the Roger Moore factor!

Much as I like Roger Moore, evne he couldn't make this film watchable, he just looked bored off his ass the entire time and was strictly in "paycheck" mode

Haha, he did look a little bored. It would have been interesting if he did some of the martial arts in the film.

I think this must have been part of some contract Van Damme had, that he'd get to direct his own film if he played ball and acted in a couple of ropey films like Nowhere to Run.

The problem is he doesn't have any experience directing and he clearly wanted this to showcase his 'acting' skills which (though admittedly he is better than a lot of other action stars) aren't that great (noted exception is the film JCVD).

The biggest disappointment is how mundane the fight scenes are. He should have got proper martial artists not actors like James Remar. On paper, this film had a lot of potential but I think Van Damme was more interested in using it as an opportunity to break out of the standard action roles.

Considering the 'martial arts' he attempts in The Man With the Golden Gun, I don't think we missed much here with Moore not attempting any kung-fu.

My god this is only the second movie on your enitre blog that I have seen!! The only other one was The Exterminator.
I saw this in 1996 on the big screen. To be honest I don't remember a lot about it. I read Roger Moore's memoir My Word Is My Bond recently and he stated he didn't get on with Van Damme!!
The only other Van Damme movie I have seen on the big screen was Universal Soldier which I thought quite a reasonable actioner in its day.

Thanks for the interesting info, I wonder why Moore didn't get along with Van Damme?

I think it was that Van Damme was trying to act the big movie star. Moore had of course been there and done that as Bond.

First of all, what a nice and helpful blog you have here! I will be following you closely!

I think you are a bit too harsh on JCVD here. The Quest is certainly not his best movie, and it is far worse than Bloodsport, but I think the mysterious and colorful Asian setting, the good fight scenes and Roger Moore make this movie watchable. The Mongolian and Chinese fighters were especially cool.

You are very correct in mentioning the MK/Street Fighter influence. The first Mortal Kombat movie is far more enjoyable than the Quest...

Thanks! Looking forward to more of your comments and insight.

We thought the biggest problem with The Quest was the middle section. It just became very repetitive with all the fights. Bloodsport is better though...Thanks goodness for Bolo! Haha.

Ty and Brett, first of all, congratulations for the great, great blog you got here.
About The Quest, i have The fondest memories of going to the theater with my old man and my brother to see it. Back in the day, i saw it as JCVD was trying to rehash Bloodsport with a bigger budget and for me, it was cool, haha.
Now a question: on that day, i saw the theatrical poster on the wall, sided with 3 pics supposedly from the same movie, but one of them shows Van Damme wearing glasses and facing a beautiful woman. It looked like an eastern setting, though this shot is not in The Quest. Deleted scene or a different movie altogether?
Cheers from Brazil. Keep up The good work.

Thanks for the kind words! Hmm not sure about that poster. That's interesting. That's a great memory. That's cool you saw this in theater, we love hearing stories like this!