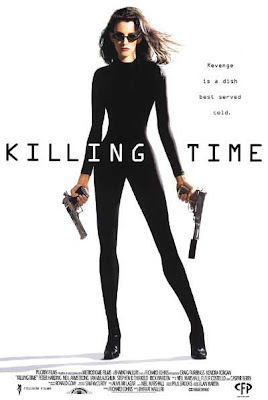 Reilly (Leach) is an effeminate and super-evil gangster who continually manages to evade the law, so cop Bryant (Fairbrass) hires a hitwoman to kill him in an “off the books” kind of way. The hitwoman in question is Maria (Torgan), and she comes from Italy to England to complete her job. Apparently a lot of British thugs are after Maria as well, and she must use her wiles to dispatch them - but is Bryant behind any double crosses?

There are many types of slogs in Direct-to-Video cinema. There’s the submarine slog, the airplane slog, the jungle slog, and the spaceship slog, just to name a few. But in the later 90’s, a new type of slog emerged: the Tarantino slog. These are Tarantino knockoffs that would not exist if not for that director. They’re characterized by a lot of violence, mainly shooting, and plenty of unnecessarily talky dialogue. Well, Killing Time fits the description to a T. Why ANY filmmaker could think they could replace the all-important character development with a lot of blah-blah-blah jawing from the characters is unknown. This way, when any action does occur, you don’t really care. In this movie, you don’t care about the plight of any of the characters.

Another reason for that is that Killing Time is also a classic case of “style over substance”. There’s almost no substance here, but there is some stylish camera moves, lighting and VHS box art. It just goes to show the old saying about not judging a book by its cover remains true. This movie is just trying so hard to be cool. But because it was the 90’s, it’s trying to be cool in that super-90’s way, and it hasn’t aged well. It uses that Portishead song multiple times and has characters either talking about nothing or doing nothing. Thus the pacing is seriously off. This movie has held up about as well as a commercial for “Buzz Cuts”, “Buzz Jams”, “The Edge” or one of those CD compilations of “edgy” 90’s music that you just can’t buy in stores, so call now.

And the sad part is, we normally love British movies, especially thrillers like this one. But this movie is  the aforementioned Tarantino slog, mixed with a knockoff of La Femme Nikita (1990), so, besides the exteriors and a character wearing a Newcastle shirt, this really doesn’t feel all that British. Craig Fairbrass does what he can here, but it’s tough. He deserves better. In this movie he looks like a cross between Patrick Swayze, Richard Norton and Mel Gibson.

Presumably this movie was for Tarantino fanatics, or younger teens "slammin'" their cans of Mountain Dew and saying “radical, totally awesome 90’s, man”. So sadly we cannot recommend Killing Time.

I have something of an affinity for Tarantino knock-offs so I have to disagree with you on this one, I found it pretty entertianing and thought Torgan did a great job in the lead role and made me care about her, too bad she wasn't in more films.

We agree she was good, but the movie was a soulless Tarantino slog so prevalent in the 90s.

I would only use the word "soulless" to describe films like Twilight.

Anyways the worst Tarantino knock-off I ever saw was "Kiss Or Kill" and that one actually went to theaters.

Heard of Kiss Or Kill, never seen it, will avoid that one.

Can't believe that went to theaters!