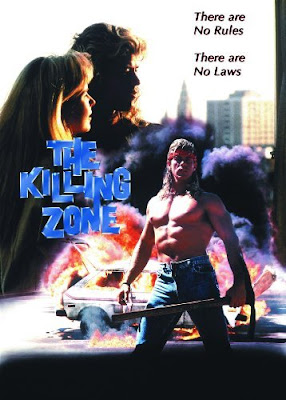 Carmen Vasquez (Dalesandro) is one of the meanest and most notorious Mexican drug gangsters around. Sam Bodine (Silvestre), in a bizarre incident, was crippled by him while trying to stop him. His nephew Garret (McBee) was sentenced to hard labor for assault on Vasquez. One day while Garrett is shirtlessly breaking rocks in the hot sun, DEA agent Jack Slade (Sullivan) approaches him and tells him he can go free if he tracks down Vasquez in an off the books kind of situation. Garret agrees, probably mainly to see old girlfriend Tracy (Moore). But Vasquez is using all his connections to go around L.A. killing everyone who he believes wronged him or his brother Pablo, who was murdered in prison, thus turning the place into some sort of Killing Zone.  It’s going to take one serious dude to stop him...and clearly no one else but Garret will fit the bill!

Oh Malibu, we hardly knew ye. Deron McBee can, without a doubt, enter the running for the meatheadiest meathead of all time. It’s truly a shame he wasn’t in more movies. One can only submit in awe at his square jaw, long blonde hair, torn muscle shirts, tight acid washed jeans, dangling earring and super-cool sunglasses. He’s one seriously bad dude with an attitude, in true 90’s fashion. He more than carries this movie, and, despite all odds, is a joy to watch.

As if this god among men was not enough, there are plenty of other worthwhile characters in this movie as well: Jack Slade (of course his name is Jack Slade) is the no-nonsense, by-the-book agent who strongly resembles Charles Grodin. It’s about time Grodin got tough and starred in a movie like this. The beautiful Melissa Moore seemingly has no qualms about appearing in some of the most ridiculous movies ever, as just a few years earlier she was in the immortal classic Samurai Cop (1989).

Because this was an early PM, they were still working out all the bugs and kinks of their now-famous formula, and, from today’s perspective, that’s very interesting to watch. There’s even an early attempt at their famous “car flipping over in the street and exploding” stunt. For a low-budget crime drama like this, it’s surprisingly coherent (if completely silly) and the fact that it made it to video stores across the land should be applauded.

So while Malibu mangles the murderous menaces in this movie (when not at Miller’s Gym), once we reach the climax it slows to a crawl. It’s almost like they realized they were running short on time and had to put in some last minute filler. But it’s okay, like we said, it’s a low-budget early PM, so all sins are forgiven. Plus, who could stay mad at Malibu?

The Killing Zone represents a golden time in DTV - see this movie if you get the chance.

Great review. I love Melissa Moore, so I'll have to try to track this one down.

Thanks! We know you are going to love this. Classic dumb PM flick...extra meatheady.

Yeah love this film, a funny thing happend to me, the first three times I ordered this movie, I got another film by the same name, the first time I received the 1999 film Ian David Diaz, the next two times I got the 2003 York Entertainment film, the fourth time was the charm.

What a ordeal getting this movie! That's great you finally got it and enjoyed it too.

Darwyn Swalve (the big bald guy) is in this movie but I am not sure if he was in the credits, he is also in Repo Jake another PM Entertainment movie but his name does not appear on IMBD for either of these movies.

I suspect Darwyn Swalve has appeared in other movies not logged on IMDB. He was a good villain. He played a good part in Deadly Reactor.