It is at this time that quoting the back of the DVD box seems to be the most appropriate course of action. Here goes: “When German terrorists take control of a government bio-research lab and threaten to unleash a deadly virus, the President of the United States is forced to call in retired Delta Force commando Brad “Bone” Jordan. Now Bone must come out of retirement for one last mission.” It goes on, but, like the back of the VHS box for Counter Measures (1999), whoever wrote it simply made up a name for the main character. Ingvordsen plays Bone Conn here, a character he portrays in many of his movies. Brad “Bone” Jordan is a name fabricated by the writer of the back of the box. There is no such character. But back to the plot, Bone Conn goes on the run with Russian terrorist (?) Boris (Krutonog, also a Boris in real life). It seems the “deadly virus” has been released into the air, and then the townspeople go nuts, and there is chaos and quarantining, with soldiers in gas masks, clearly modeled after The Crazies (1973). Then some of the survivors dress up in Old West-style garb and take on the soldiers. If none of this seems to make sense, don’t worry. It basically doesn’t. Will Bone Conn live on?

Here’s yet another Ingvordsen/Kaman DTV piece. It starts with a garbled spoken opening, and the talkiness continues. The color palette used for the film is dull, gray, bleak and depressing. There’s zero character development so you don’t really care what happens to anyone, with the possible exception of Bone Conn if you’re feeling charitable. We never negatively criticize movies for having amateurish actors, but most of the players here certainly are. There are two female characters (who get mere minutes of screen time), one is a waitress named Flo. No joke. The other is a cliched reporter named Lisa. At a certain point you have to ask yourself: who cares about this? Who is watching this? Who rented this? Who is the intended audience? Even with a punishingly unnecessary 98 minute running time, these questions remain unanswered. 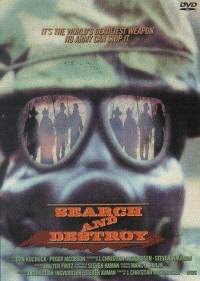 Now, all that being said, we actually applaud Ingvordsen and Kaman for actually doing what they do. They have a vision, they clearly work hard to put out their product, and they actually succeeded in breaking through into video stores. So they actually DID something, unlike reviewers like us who have not. It’s just a shame their stuff isn’t a little more watchable. Plus, with the whole concept of “cowboys vs. the army”, there’s a seed of an idea there that is only really touched upon. There’s something interesting about guys in fatigues and gas masks with tanks facing off against guys in duster coats and cowboy hats. But this “throw a bunch of ideas against the wall” style reached its apotheosis with Cyber Vengeance (1997), the 90’s “VR” trend allowing the perfect vehicle for it. They even recycled some of the footage here for it.

With a little more focus and character development, Search and Destroy could have become more of a winner. As it stands, it’s more of a blah entry in the action stakes from the tight stonewashed jeans era. But to quote once again from the literary virtuoso who penned the back of the DVD box, “with thrilling adventure and stunning action, this is one search you won’t want to destroy.” This movie is one search I won’t want to destroy? WHAT? If that makes sense to anyone, write in and leave a comment today.

Didn't think it was, but Christian is definitely not a very good actor, you're better watching the other film called "Search And Destroy" (the one with Dennis Hopper)

This is one of Christian's lesser efforts, not terrible but not as entertaining as the likes of the Airboss films, Hangmen, Covert Action, Shocktroop, Comrades In Arms, Mob War, Cyber Vengeance and Strike Zone.

Agreed. The Dennis Hopper one was pretty decent.

Comrades In Arms and Covert Action are coming soon. Cyber Vengeance is going to be posted on December 28th for this theme month of post-apocalyptic films.