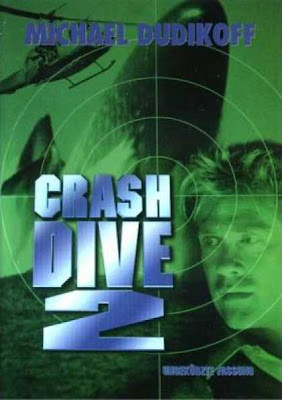 
More madness from the mind of Fred Olen Ray! Can anyone confirm he and Jim Wynorski are two different people? Has anyone ever seen them together in the same place at the same time?

Anyway, in this underwater escapade that is highly reminiscent of Under Siege (1992) ... When Navy medic Captain Jake Fuller's brother is murdered by Russian spies, Jake goes underwater to investigate. Even though Jake is a pacifist and doesn't want to fight, evil Russians take over the supersub Odessa and plan to blow up/take over the world. Only he and Lt. Swain (Wendy Schumacher of skinemax softcore fame, here strangely credited as "Alexander Keith") can save the day, so they both board the sub. The Russians and their special gas that makes people vomit yellowish green liquid are no match for these two. Will Fuller and Swain be able to stop "Operation Hailstorm" and prevent a new cold war?

Remember the Wynorski vehicles Desert Thunder (1999) and Stealth Fighter (1999)? Just change the fact that those had to do with planes, and switch that to a submarine, and there you have it. It even has the trademark stock footage we've come to know and love. The Dolph Lundgren classic Agent Red (2000) is basically a remake of Counter Measures and uses some of the same footage. But where did Counter Measures get their stock footage? The world may never know.

One of the funny things about Counter Measures is that it is solely cast with celebrity lookalikes. Besides Dudikoff and Schumacher, the rest of the cast resemble Tim Roth, Michael Imperioli, Bob Newhart and Christopher Titus, who, strangely enough, was actually in Crash Dive (1997), the movie to which Counter Measures is a sequel. But the lookalike in Counter Measures plays a different character than the one Titus did in Crash Dive, so it must be a weird coincidence.

Also in the weird department, on the back of the VHS box (released in the U.S. on Avalanche), Michael Dudikoff's character is said to be "Zach Silver". Seeing as his name is Jake Fuller in the film, where did this name come from? Apparently someone just made it up. Did they not watch the movie? You don't see that type of error often.

Dudikoff turns on the charm when he could easily go on autopilot and let his cool hair do all the work. Instead, he brings some funny body language and interesting mannerisms to his character of Jake Fuller (NOT Zach Silver). He is as animated here as he was in the awesome TV show "Cobra" where he played Robert "Scandal" Jackson.

On the negative side, there is some jumpy editing, as well as some jumbled plotting and cheap-looking sets, but all that is to be expected and the presence of Dudikoff (and the rest of the cast, whoever they may look like) smooths it all over. you will probably be entertained by Counter Measures.

I just picked up both Crash Dive's for $2 each and I'm looking forward to checking them out soon!

Nice! what a great deal!

I look forward to your reviews!