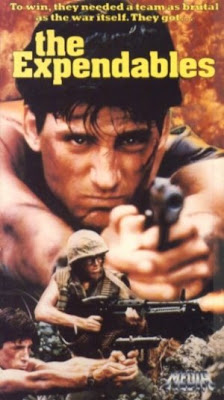 
“I’m a cool dude because nothing rests on me.”


Back in ‘Nam, Captain Rosello (Finetti) is assigned a rag-tag bunch of misfits to take under his command. Under Rosello’s leadership, they become “The Expendables”, soldiers specifically meant to take on dirty and extremely dangerous missions. These include capturing a V.C. Colonel (Diaz) and saving nurses that have been taken hostage. Will these men accomplish their difficult missions - and will they be able to get along with each other long enough to survive? Find out today!

Man, look at the cast for this one...Stallone, Statham, Dolph, Gary Daniels, the list goes on and on! Wait a minute...you mean in 1988 there was a movie called The Expendables...and it’s a CIRIO SANTIAGO movie? Wow, who knew Cirio was so ahead of his time? Well, this Expendables may not have the starpower of the newer one, but it does have Anthony Finetti. So take that. It also has Nick Nicholson in a tiny cameo role and the ever-present Vic Diaz. So this outing can obviously hold its own. Well, maybe not.

What we have here is your typical jungle/exploding hut/helicopter/machine gun fire movie. Cirio has made more of these than most other directors, and this does have all the standard cliches, such as the barfight, the religious soldier, and of course the ragtag team. This is a standard-issue movie. It’s not great, it’s not bad, it just kind of floats somewhere in the middle.

The movie has enough little moments to keep it afloat, but it doesn’t really distinguish itself in any significant way. It doesn’t have a forceful drive and energy moving it forward. Special mention should go to Peter Nelson, the actor who played Sterling. He did a good job and managed to stand out a bit. He obviously couldn’t get enough of the jungles of the Philippines so he returned for Cirio’s Eye of the Eagle III (1989). Anthony Finetti could have had a long career making movies like this, but it seems he did not. It’s a shame, he could have been the next Tony Marsina.

If we were to rate this on a scale from one to ten, it would be a five. This is what you might call a “neutral” movie, something that’s not one thing or another. Hence, while we can’t wholeheartedly recommend it, we shouldn’t say to totally avoid it either. Cirio has done both better and worse movies, so The Expendables will have to be something of a midway point in his career.

Pretty much agree, this is one of Santiago's more middle-of-the-road efforts, it's not quite up to par with his other films like Fast Gun, Stranglehold, Dune Warriors, both Silk films, Raiders Of The Sun, Final Mission, The Devastator, etc.

I quite liked this one, though I think one of the most entertaining of his jungle action films is Killer Instinct with a very young Robert Patrick. Cirio's best film still has to be Equalizer 2000!

Nice! Will have to check those out. Always wanted to Equalizer 2000. Gotta love that huge gun on the poster!

I'm happy to see you review the "original" Expendables, although I liked the movie more. I thought both the script and actors were above average for a Santiago production. For a really OTT Santiago Vietnam experience, I recommend Beyond The Call Of Duty. Santiago favorite: The Devastator.

Those are both reviewed on the site and we are fans of The Devastator in particular...especially Jack S. Daniels as Ox.

We also feel one of Cirio's best is Naked Vengeance...review forthcoming.

I couldn't find your review of Beyond The Call Of Duty. Does it have an alternate title? I would love to read your take on it.

I guess we didn't post it yet. Sorry...Our mistake. Will post it after Post-Apocalyptic month in Late-November\December.