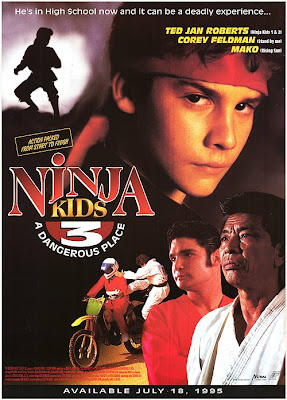 Ethan (Roberts) is a young-looking and precocious high school Freshman. His passion is Martial Arts training with a team called The Lions, led by Sensei (Mako). Just Sensei, no name given. His brother Greg (Cochran) is also into Martial Arts, but is involved with a gang of ne’er-do-wells called The Scorpions, the leader of which is the smug jerk Taylor Dylan (Feldman). During a Scorpions-led home invasion, Greg ends up dead. The Scorpions make it look like a suicide. But Ethan knows better, and he goes undercover and joins The Scorpions to get the truth about his brother. There, he discovers what’s really going on at the dojo - and what evil Sensei Gavin Smith (Teague) is up to.

With Principal (Van Patten) - just Principal - clearly a lot of time was given to character names here - sympathetic to him, but with pressure mounting from his parents, his Sensei, the cops, and potential love interest Kim (Vessey), Ethan’s going to discover that his L.A.-area neighborhood is indeed A DANGEROUS PLACE.

A Dangerous Place is yet another PM triumph, an amazingly fast-paced and entertaining film for high schoolers and older viewers alike. To state the obvious, yes, it’s clearly modeled on The Karate Kid (1984), but we really enjoy the mid-90’s PM vibe of this. Ted Jan Roberts is likable and charismatic as Ethan. He could have had a major Hollywood career, he’s certainly talented enough. Thanks to him, really, the movie works because you care about his plight.

This was also the era of oversized clothing, and some of his shirts are gigantic. He looks like a size Small, but seems to be wearing XXXL T-shirts. They’re so big, you can see his whole collarbone. There are other inspired fashions in the movie as well - something to look out for.

That being said, Corey Feldman was an inspired choice as the baddie (or at least one of them). He seems hilariously scrawny to be a Kung-Fu master, and his belt-and-pants combos are pretty amazing. He adopts a curious Christian Slater-like drawl when he’s not wowing us with his Feldman-Fu. Keeping in mind this was the time when 90210 was huge, there are plenty of scenes at an L.A. school, his character’s last name is Dylan, he’s a 26-year-old high school student, and he has impressive sideburns.  His smarmy performance totally works, and he always seems right on the edge of breaking into a Michael Jackson impersonation, and only by sheer force of will is he holding himself back.

If only Dick Van Patten was the Principal for 90210. Van Patten has maybe two lines and seems confused. How - and WHY - they got him for this role is indeed pretty confusing. It’s a total sit-down role. William James Jones as Eddie - who later was a member of Saved By The Bell spinoff/knockoff California Dreams - does some great mugging for the camera with his outrageous facial expressions.

But the man who steals the movie is Marshall Teague as the diabolical Sensei. (Sidebar: is it just me, or is there something really funny about the name “Sensei Gavin Smith”? Somehow it doesn’t have that ancient Asian feel to it). One of the reasons I personally never took Karate classes is because I was afraid of being just one of a gaggle of teens forced to do the bidding of an amoral, maniacal Sensei. And who’s laughing now?

Seeing as this is a PM movie, it wouldn’t be complete without some car stunts, especially a middle-of-the-street-flip-and-blow-up, and another one on a softball field that viewers of Night Of The Wilding (1990) may find curiously familiar. In all, we give a solid recommendation to this enjoyable movie. Good times.

Despite your glowing recommendation, I think I better steer clear of this one. I have almost zero tolerance for "Karate Kid" rip-offs.

Yeah it was interesting to see Feldman play a bad guy for once and I too wish Roberts was in more films.

Venom: Feldman was great as the baddies, and Ted Jan should have been in more movies. Will have to check out Magic Kid.

It's definitely worth checking out all the action movies PM Entertainment produced. You enjoyed this one more than I did, but I still think it was a pretty good movie. PM made so many classics. Remember to go to A Dangerous Place once in a while.

Haha! Feldman stole this movie as the baddie. One of the best PM's is The Sweeper.

Were can i find soundtrack for this movie thanks ?

Not sure. Wish we knew too.