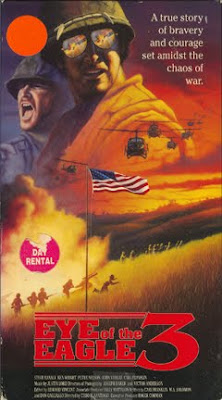 AKA: Last Stand At Lang Mei

In the first 'Eagle, the only thing that happened was when a random soldier said "You killed my brother!" and then started shooting his AK-47 for 90 minutes. Obviously this warranted TWO sequels. People were clamoring for more!

In this installment of the 'Eagle trilogy, two divisions of gung-ho soldiers in 'Nam who look like David Arquette, Rob Schneider, Dick Butkus (of Hamburger: The Motion Picture fame), and Val Kilmer, plus token black guy Carl Franklin (who also co-wrote the movie) are shooting their sawed-off shotguns and digging latrine holes. When the Butkus lookalike gets thrown into a military prison, he is instantly replaced by a cocky young hotshot who closely resembles Owen C. Wilson. Both "Cold Steel" and "Red Thor" divisions miss their mustachioed leader, because the new guy is an attention-seeking and vain meanie who also is a a bit crazy.

To take out their frustrations, they mindlessly shoot Vietcong who look like they are on safari. The shootings and blow-ups take up most of the running time. There is little to no character development or plot, but somehow they managed to sneak in a subplot about their jailed commander where he tries to escape by talking to the guard named Kowalski (Frederick Bailey, who really stands out in this muck.) To continue the lookalike phenomenon of this movie, he closely resembles "Weird" Al.

As per usual in "Nam flicks, there is a scene where a buddy dies, and his comrade yells "NOOOOOOO!!!!" for a good 20 seconds. Not to be confused with the scene where the soldier sees a vision of himself dressed as a blue-skinned Indian and says in a very flat tone of voice "oh-no."

The leader of the Vietcong has a British accent in the second half of the movie and always plays chess. He eventually knocks over the board in disgust and has slicked back hair in the jungle.

Skip the other two "Eagles" and go straight to Eye of The Eagle 3. It may be boring and dumb at times, but it has silly moments that you can laugh at.