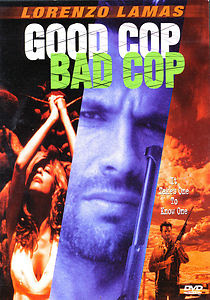 “I spend my time in the distant past. It’s the recent past I can’t quite stomach.” - Jake Kilkanin

Jake Kilkanin (Lorenzo) is a cool dude and ex-cop who just wants to laze around in his San Diego apartment and eat Nutter Butter bars and drink Jim Daniels brand whisky. But trouble comes a-callin’ when some of his former employers want him to investigate “one last case”. It seems an evil Mexican drug lord named Chapparo (Rodriguez) is involved in not just drugs, but illegal border crossings, kidnap and murder.

When an annoying harpy named Constance Mainwaring (Lazo) - who used to be a stripper named “Ecstasy” - insists on getting Jake to help her retrieve her missing millionaire husband from the clutches of Chapparo and his thugs, Jake must come out of retirement and make a run for the border. Will Jake triumph? Find out today (?)

Released towards the end of Lamas’ 90’s heyday, with Good Cop Bad Cop, also known as Black Dawn (not to be confused with the Seagal outing of that name), you can start to see the wheels starting to come off the seemingly-unstoppable Lamas train that ran through video stores in the 90’s. Don’t get us wrong, Lamas himself is as good as ever - as the slick and cool, yet literate Kilkanin, he puts in a typically likable performance, but the movie as a whole is talky, slow, and seems to be missing something.

We’ve all seen a lot like it before, and the structure of the film is very old fashioned. Whether it’s an intentional throwback to the 40’s/50’s style of mystery-adventures is unclear. But it’s not gritty or tough when it needs to be, and it doesn’t hit the viewer hard. It just kind of bounces off your eyeballs, leaving no real impression. 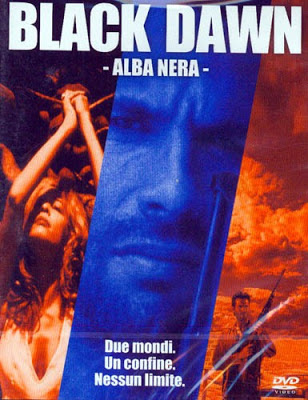 While the movie is well-shot and competently made on a technical level, there is a dearth of action, which is certainly what customers going into a Lorenzo Lamas movie called “Good Cop Bad Cop” are expecting to see. Lamas does no Martial Arts in the movie. But he is seen shirtless...again, so his unbroken record of shirtlessness remains intact.

For the final third of the movie, when it becomes a desert slog, that seals the movie’s fate as video store shelf-filler. Not offensively bad or poorly made shelf-filler, but shelf-filler nonetheless.  Its more lackluster qualities pretty much turn the movie into a less-wacky Bail Out (1989). But then what would you expect from director De Bello, who has dedicated the majority of his career to making Killer Tomatoes movies? The least he could do is explain exactly who the “Bad Cop” is in this scenario, and what with all the talking being yammered about, you’d think that would have come up at some point.

But in the 90’s nostalgia department, the main baddie wears a VR-esque mask, proving the ubiquity of VR in the 90’s - even in a non-VR-based movie, that style of helmet still makes an appearance. The fact that it looks silly and not at all threatening didn’t seem to factor in when the decision was made to put what looks like an oversized watermelon painted black on the main villain’s head. And because Chapparo and his goons leave Olmec medallions on the dead bodies of their victims, the parallels to Legends of the Hidden Temple are rife. The only remaining question is: when is Kirk Fogg going to make an action movie?

Lamas fans may find some enjoyment here, but on the whole this is one of the weaker movies he’s appeared in.

I agree that it's one of Lamas's weaker films, but I still found it more watchable then the likes of say Undercurrent or The Debt.

We are on the same page. Saw Undercurrent a long time ago and you're right, it was weak...never saw The Debt.

The Debt was dissapointing because I was expecting more from a film with both Lamas and Michael Pare in it, but neither of them really got to do much.

BTW, are you excited to see The Last Stand? I'm going tomorrow, then next week i'll be seeing Parker.

That is disappointing about The Debt. They had Lamas and Pare...should of been like Bounty Tracker.

Got to see The Last Stand yesterday. It was classic Arnold. He's back! Definitely get back and tell us what you thought!

Also excited to see Parker and Bullet to The Head too.