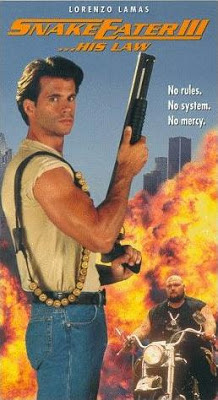 
Jack “Soldier” Kelly returns - again - in this third and final entry in the Snake Eater series. This time around, Soldier has to turn in his badge and gun - again - after his rogue ways get him suspended - again. During his forced leave of absence, a woman contacts him about a special job. The parents of Vivian Molison reach out to Soldier to tell them their sad tale. Vivian (Hway) was kidnapped, raped, and used as a sex slave by the evil biker gang the Hell’s Furies. She came home, but she’s so traumatized she can barely speak.

All the Molison parents want is for Soldier to infiltrate the gang and kill them off one by one in a brazen act of revenge. Soldier not-so-reluctantly accepts. He then teams up with sidekick Cowboy (Mustain) and they get to work. Of course, Soldier’s girlfriend Hildy (Cook) doesn’t approve of his dangerous lifestyle. But Soldier meets his match with the imposing Goose (Bigelow), a tough biker dude with a bladder problem. Will Soldier and Cowboy (they’ve really reduced heroes down to the main essentials here) escape alive, and thrive, after they strive to destroy the bikers’ hive? Find out today!

In our humble opinion, this is the best of the Snake Eater series. While some of the wacky humor didn’t quite work in the other two outings, here it does. And while that humor didn’t always gel with the action elements at work, here it does as well. And at a running time of an even 90 minutes (as opposed to the 109 as advertised which is incorrect) it clocks in right where it should be, in contrast to the sequels which tried your patience at times. Granted, there are some pacing issues here too, but they’re reined in. Lamas is charming, as ever, and seems to be having fun. What with some of his clever inventions to off the baddies, he’s sort of like a cross between Renegade and MacGyver.

Interestingly, there’s a scene at a motel where Soldier and Cowboy come under siege from the evil bikers, and they have to bust through the walls of the motel. Such a scene was also seen in that same year’s Universal Soldier (1992) - coincidence? Could this be an indication of a future crossover, Universal Soldier Kelly? Time will tell. Actually, time has already told, and the answer appears to be no.

In the evil biker department we have Bam Bam Bigelow - oh, excuse us, SCOTT “Bam Bam” Bigelow. Somehow he just doesn’t seem like a “Scott”. But presumably he added his first name so he could seem more professional. If his movie career had taken off, like for example the way it did for The Rock, would it make sense to see a poster and it simply says “Bam Bam” at the top of it? Regardless, it is fun to watch this cartoonish villain with his silly threats and goofy gruff voice face off against Lamas.

Snake Eater III (you gotta love the Roman numerals, it really gives things a touch of class) does indeed give you what you want: an extended barfight, a classic WYC (White Yelling Chief), a rogue cop who has to turn in his badge and gun, and blow-ups and violence by a cop who plays by his own rules. Hence, the Snake Eater series finally comes into its own. Sadly, just as it was warming up, the series ended. Such is life. Apparently this outing was based on a novel, “Rafferty’s Rules”, but the others in the series weren’t (?) but Snake Eater III: His Law is 90’s video store action section fun and you’ll surely be entertained.

Also check out reviews by our buddies, DTVC and The Video Vacuum!
Posted by Ty at 16.1.13

Agreed that this was the best in the series, Erschbamer also directed the Bounty Hunter films with Michael Dudikoff, which were pretty entertaining.

Thanks for the plug! Great review as always. This was a total blast. I still have to catch Part 2 sometime...

Venom: Agreed. This was the most solid of the Snake Eater films. Bounty Hunter 1 and 2 are coming soon.

This movie sounds like a real good time. Though, I'd hate to start a trilogy with the last one, even if is the best.

Not sure I could handle a Snake Eater triple feature. Too much awesome.

You will love the Bam Bam Bigelow scenes. They are hilarious. That would be pretty cool to have a Snake Eater triple feature!

Glad to see this series finally gets decent with part III, the only one I've not watched yet.

It is definitely worth seeing to finish the trilogy! Lamas has a funny fight in the beginning too. Lots of silly one-liners.