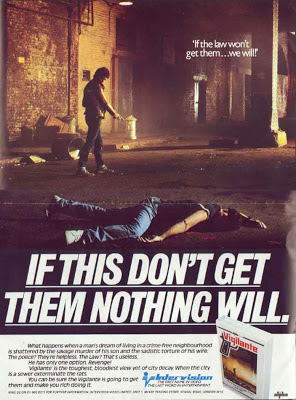 
Eddie Marino (Forster) is a blue-collar guy who goes to his factory job, then goes to the local dive bar with his friends (Nick, Burke, and Ramon - Williamson, Bright and Carberry, respectively), then comes home to his loving wife (Alda) and son. His simple life is interrupted when a vicious street gang led by the evil Rico (Colon) and Prago (Blakely) invade his home and assault his wife and son. Feeling defenseless against everyone from small-time drug pushers on up, Nick forms a vigilante group because the court system is a corrupt failure and isn’t protecting its citizens. Now crime is running wild so everyday citizens must stand up and fight. Eddie is initially resistant to the idea, but after seeing shyster lawyers like Eisenberg (Spinell) pull the rug out from under good-faith lawyers like his own, Mary Fletcher (Lynley), Eddie snaps and is sent to jail for contempt. It’s while he’s inside that he meets Rake (Strode)...but when he gets out, he decides to join Nick’s group after all and it’s then that the truth that he initially denied comes out: if you want justice, you have to do it yourself.

Why, oh why aren’t there more movies like Vigilante? We will never stop pining for them. Just about everything about Vigilante is awesome. From the second you see the font the opening credits are in, you know the movie is going to be good.  The cast is amazing: it’s one of Fred Williamson’s best - he puts a lot of energy into it and gets all the best lines. Plus he’s just so cool. There are moments when he breaks through the top of the coolness thermometer. Joe Spinell is perfectly cast as the sleazy lawyer. He has a small but integral role, as does Steve James. Come to think of it, same for Woody Strode. Robert Forster is always worth watching. Jay Chattaway’s music is superb and ties it all together. 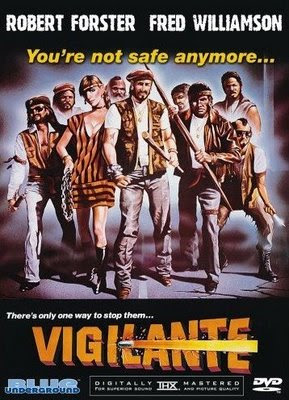 Revenge movies are one of our favorite things to watch, and the gritty NYC locations of the 80’s are simply mesmerizing. The post-Death Wish (1974) cycle of The Exterminator (1980), Vigilante, and The Protector (1985), and, to a certain extent, Exterminator 2 (1984) give an excellent picture of the New York City of the day. It’s simply fascinating, not to mention addictive to watch - if you know any other movies like these, please write in a comment to suggest them!

The Anchor Bay DVD is excellent, with a beautiful widescreen transfer that looks great, and some nice extras. There’s not much more to say, really...for a great movie from a never-to-be-duplicated time period, with a top-notch cast that’s fast-paced and entertaining from start to finish, with a great message...Vigilante rules! What more could you want? If you haven’t already, just buy the DVD today!

Also check out a review by our buddy, M. Brown from Two Dollar Cinema!

You saved the best Hammer movie for the end of Fredruary. This movie is truly a classic. The actors, the direction, the story...it's hard to fault anything in the movie. And the Intervision VHS poster you found is fantastic. Movies with loads of gritty New York footage: how about Maniac (1980) or Maniac Cop (1988), both also directed by William Lustig, or Street Trash (1987), one of the sleaziest movies ever?

The Lustig movies are great examples of NYC footage. As is Street Trash...it is unlikely we will be reviewing Maniac or ST.

Thank you for noticing that we saved the best Fred for last.

You know, as excited as I was to see this for the first time a year or so ago, something just didn't gel right for me. I don't remember exactly. I love Lustig as a director, and thought Williamson stole the show. In fact, I felt "he" should have starred in this one. lol. I think I need to revisit this again and see why I didnt like it as much as I would have hoped. Nice review guys! And thanks for the reminder. :)

Thanks! No problem. Williamson rocked in this. You're right, he should of have a bit more screen time though.