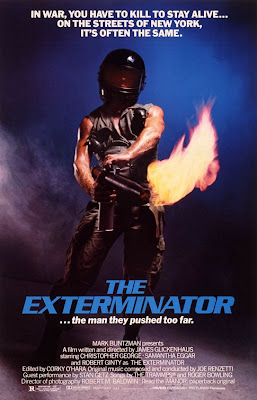 
Best friends John Eastland (Ginty) and Michael Jefferson (James) survived the horrors of the Vietnam war together. Michael even saved John’s life. After the war, both men work at a packing plant in New York City’s South Bronx. One day, Michael is assaulted and put in the hospital by a gang called The Ghetto Ghouls. Eastland then begins his quest for revenge in the seediest parts of the city - and in his attempt to clean up the streets he becomes vigilante hero The Exterminator.

Everyone from street punks to child molesters to upper-class mobsters become the target of The Exterminator’s retribution. He becomes so effective, he attracts the attention of Detective James Dalton (George), a man who wants to find and stop him. Even the CIA is interested in stopping Eastland. Will they catch him - or will Eastland live to flamethrow another day?

Yes! We here at Comeuppance Reviews HQ LOVE The Exterminator. As you can tell from the name of our site, we have a special fondness for revenge movies, and they don’t come much better than this. Movies of this type, from this place and time have a special fascination, and The Exterminator does not disappoint one iota. Everything from its killer opening set in Vietnam all the way through to the end, this movie delivers the goods in spades. 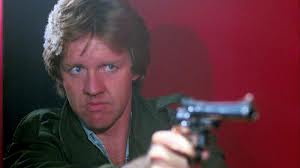 James Glickenhaus is a quality filmmaker, and we’re fans of his work. We also recommend The Soldier (1982) and Shakedown (1988), but this is the money movie. There’s more sensitivity and intelligence behind The Exterminator than most people give it credit for. There are subtle comments about Vietnam vets and their treatment once they came home, and the shoddy Jimmy Carter presidency if you care to look for them. Plotwise there is plenty of subtext and parallels - all of which add to the texture and interest of this fine film.

It’s rare that a movie can entertain and please an audience on an intellectual and a visceral level. But The Exterminator achieves this rare feat. While the movie does have elements from Taxi Driver (1976) and Death Wish (1974), Glickenhaus brings this style into the gritty 80’s, with fantastic results.

According to the DVD commentary, he shuts down critics that wrote off this movie as a Death Wish knockoff by saying he didn’t see Death Wish before filming. Glickenhaus has plenty of other interesting comments, such as when he says that Joseph Bottoms, brother of Timothy, almost played Eastland, or when he says he imagines First Blood (1982) as the ideal continuation of the Eastland story, not so much Exterminator 2 (1984). 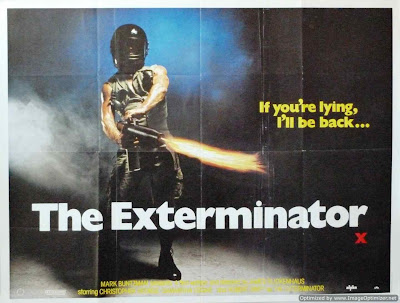 Speaking of the DVD, Synapse knocks it out of the park with its excellent DVD/Blu-Ray combo pack. While I’d seen the film before on VHS, it was like I was watching it for the first time here. It looks amazing and you have to go on Amazon and buy this right now.

Being fans of stunts and stuntmen, we appreciated how in the end credits, it showed specifically which stuntman did what stunt. You don’t see that very often. As for the more recognizable stars, it’s great to see two fan favorites, Robert Ginty and Steve James together.

They have great chemistry and really seem like friends. The Christopher George-Samantha Eggar plot is interesting because it slyly implies that Dalton is not exactly rushing to stop Eastland, he’s doing it rather leisurely because he secretly approves of  what he’s doing, but he has to keep up appearances. There’s actually a lot of sly moments, such as the use of the song “Disco Inferno” by the Trammps, among others. Anyone who watches Law & Order will recognize Dennis Boutsikaris and Ned Eisenberg who often play lawyers, as well as David Lipman, who often plays a judge on the show.

In the 42nd street scenes you can see the famous Lyric theater, where Glickenhaus says The Exterminator played to sold-out houses for 24 hours at a stretch. The Lyric is also featured in Shakedown, where the movie marquee is showing The Soldier, and The Exterminator.

So Glickenhaus has some history there. We love seeing 42nd street and the movie marquees of the time, and you can see theaters playing Beyond The Door (1974), Cauldron Of Death (1973), and the O.J. Simpson vehicle Firepower (1979). It truly was a time when O.J. Simpson was simply an athlete/actor, and the World Trade Center was still standing in all its glory. There’s a gigantic nostalgia factor at work here, and it just shows we need The Exterminator now more than ever.

The Exterminator simply rocks and is a must-see. Go Eastland!

Also check out reviews by our buddies, Tars Tarkas and The Video Vacuum!
Posted by Ty at 12.8.13

One of the greatest movies ever made. There is a special atmosphere about movies made at this time in New York that cannot be replicated, mostly because the real sleaze and grime that created it is gone. Great song during the end credits: Theme For An American Hero by Chip Taylor.

Can't agree more! This is a New York classic. Happy all the sleaze and grime is preserved on film forever.

One of the all time classics, for all the reasons noted in the review and the above comment by Roger. The opening sequence in Vietnam is especially brutal, with the notorious decapitation. This ranks with the best of the Death Wish series for revenge films. The sequel simply lacks the grit and brutality.

Terrific review. I'm in complete agreement with you guys. When it comes to the cream of the crop of Vigilante Cinema, this movie is second only to the Death Wish series.

Thanks also for the plug!

Force Field: Classic revenge flick. We need more of those now...Death Sentence was the last one.

The Video Vacuum: You're welcome! No problem. Death Wish is great, especially the 3rd and 5th ones...when it got really ridiculous. Haha.

OK, I'm going to be the dissenting voice, but I really didn't think The Exterminator was all that. Maybe I'd simply read too much in advance of actually seeing it, but I found it really disappointing. It wasn't bad, but it just didn't have the kind of cool stuff I'd been led to believe I was going to see.

Hhmm. I guess I need to catch this one again because I remember being let down when I finally sat down to watch this for the first time. I had expected more based on everything I had read about it through the years. Awesome review though!

Exploding Helicopter: Opinions may differ, when you read about the movie, sometimes it doesn't live up to your expectations. Death Wish 5 is one of the sillier revenge movies, because it has a exploding soccer ball and "evil" linguini.

RobotGEEK: Thanks! There's something about movies from this period of time that really appeals to us.

I liked this film but didn't love it, I guess my main complaint is the pacing sometimes lags(the romance subplot didn't really add anything to the film).

I'd certainly love to see a remake of this film though, Death Sentence and Law Abiding Citizen proved that Hollywood still knows how ot crank out a good old-fashioned vigilante film.

Really enjoyed Law Abiding Citizen. Gerard Butler needs to stick to those type of roles. He rocked in Olympus Has Fallen.

So, "The Paper Chase Guy" Robert Ginty becomes "The Exterminator"; a full blown action hero. I was not prepared. The movie is well paced and really packs a wallop. When it got to the homoerotic S&M club all I could think was, "Did Tarantino get his inspiration for the gun shop / sex slave sequence in Pulp Fiction from this?". I was disappointed in the ending until I realized all the buildup on Christopher George's cop character was precisely so 'The Exterminator' could come back for a sequel. And so he did, but for Crown International?

Happy you enjoyed this one. Ginty at his best. Exterminator 2 isn't bad either. We have more Ginty coming soon.