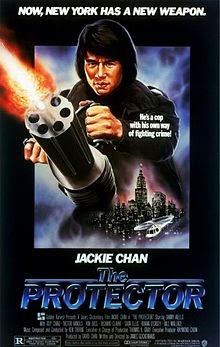 Billy Wong (Chan) is a tenacious and dedicated cop who always gets his man - but doesn’t always play by the rules. Because of his rogue ways, he’s busted down to “crowd control”. While with his new partner Garoni (Aiello) at said crowd, a fashion show displaying “shimmering cocktail wear”, a woman named Laura Shapiro (Ellis) is kidnapped by marauding thugs which crash the fashion show.

Tying her kidnapping to the nefarious Hong Kong crime lord Harold Ko (Chiao), Wong and Garoni travel all the way from their home base in New York City to Hong Kong to rescue Laura and bring down the criminal enterprise of Ko. While there, they team up with some unlikely allies, Stan Jones (Ballistic director Kim Bass) and Soo Ling (Lee). Will they achieve their mission, and not destroy Hong Kong in the process? Find out today!

We really loved The Protector. It’s classic 80’s fun all the way, with no shortage of action. Not only does the movie look great, thanks to its excellent cinematography, but it truly is Jackie Chan as you’ve never seen him before.

We can see why he and director Glickenhaus had a falling out over differing visions, but, without giving away any spoilers, you just have to check out the scene between Jackie and none other than Big John Studd. It’s amazing. In the New York City scenes, there are some great shots of the World Trade Center towers that add another layer of nostalgia. But besides the WTC, there’s also a great example of a WYC (a White Yelling Chief, that is). The entertainment value never lets up. 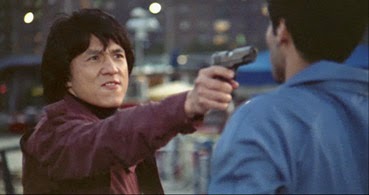 This movie was released at the height of Glickenhaus’ powers as a director - we can see why Golden Harvest wanted to do a deal with him. He was smart enough to give action fans all of what they want, and none of what they don’t. There’s no stupid, annoying kid, there’s no stupid, annoying romance, it’s just one super-cool action setpiece after another, with Jackie doing what he does best. What more could you want? 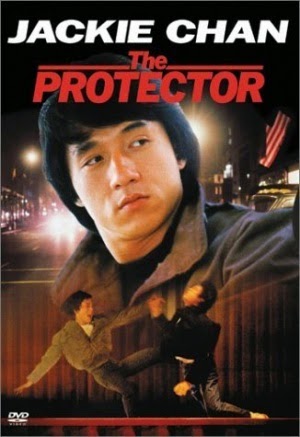 Plus, we get to see a slimmer Danny Aiello teamed with Jackie Chan. This truly was a once-in-a-lifetime pair-up. We thought they made a great team. Aiello wears a red jacket with no shirt, but with a medallion, which was a cool style for the day, and he’s familiar with Hong Kong in the film because he was in Vietnam and they used to go there for R & R.

The Protector is a winner - it’s just wildly enjoyable fun from beginning to end. Featuring the song “One Up For the Good Guys” by Chip Taylor, we strongly recommend The Protector.

NOTE: We really didn’t discuss the two versions here - but it appears the American DVD is the ideal way to view this film.

I love this film as well, I get why Jackie's not a fan of it, but i'm still glad he did it.

The main difference between the two versions is that the HK version has all the nudity removed and some of the violence(and swearing as well I think) and has some additional fight scenes.

I'd like to see someone do a fan edit of the film with all the extra fight scenes added to the American version.

Would love to see the extra fight scenes one day.

Love this movie too. It is without his typical humor.

I prefer the U.S. version. Been watching it since I was 13. Got a nice Laserdisc of it also. As for the HK version, it's here:

This is the best Jackie Chan movie; no silliness, just action. It's a shame James Glickenhaus quit the movie business.

Lee: That's awesome you have the laserdisc! Thanks for the link to the other version. Will have to watch it.

Roger: Totally agree. Glickenhaus made some fun movies. He should come back and make one more.

That's annoying. Luckily if you buy the protector bluray, the HK version is on it.

Great review. This was the last good Glickenhaus movie IMHO. I never really cared for "Shakedown" and "McBain" was...well...McBain. Great early Jackie movie too. I loved the action and I LOVED the slow-motion. Classic Glickenhaus.

I actually just showed this movie to a friend of mine last night. And, boy, oh, boy did he get a kick out of it. We couldn't stop laughing.

Too bad for the Glickenhaus/Chan fall-out. He should have at least let Jackie direct his own fight scenes, per usual. He obviously knows what he's doing and knows the best way to shoot it.

Thanks! This is definitely a classic. Lot of re-play value to show your friends. Chan should always direct the fights.

Great review (yet another film I purchased due to your influence) You are dead on with the observation that this is action after action after action. Only the barest of plot holds it all together. But it does hold together. Did anyone else think that Aiello might have put a clause in his contract for the Uzi? I mean...every. single. time. (except for the grenade launcher, of course). Geez. Also, am I the only one who thought the fight choreography was a bit stilted when compared to most Jackie Chan films?

Watched it last night. It was great! A J.C movie without the humor overdose? Hell yeah! I've seen J.C movies but I can't really recall if there are others like that (No humor overdose). Are they?

Loved the whole different approach in this with Jackie. First scene he draws his gun and boom! Blood splatters, Jackie is ice cold...fuck yeah!

Loved also Aiello in this. Wonder if it's the only time he played a cop instead of a wise guy.

Gregor: Thanks for taking our recommendation! We appreciate that. The fights were a bit slower, but still entertaining. You're right, got to love Aiello and his uzi. Haha.

Snake: This is one of his most serious movies. Loved when Jackie shot that guy in the beginning. Chan should play more tough characters like that.