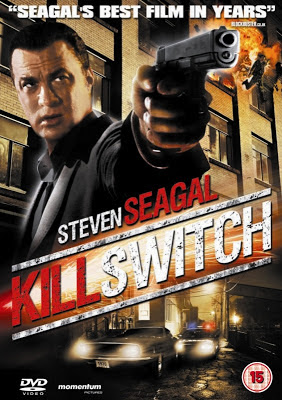 
Set in Memphis, Tennessee, Kill Switch is the story of one Jacob (Seagal) a cop who will use any means necessary to get the information he wants. Plaguing the city is a serial killer named Lazarus (Filipowich), who leaves clues which must be deciphered at the scenes of his crimes, which means Jacob must go to the library to try and figure them out. Meanwhile, another scumbag, Billy Joe Hill (Collie) is causing mayhem on the streets as well. Jacob is also busy fighting the traumatic memories in his head, but he has his partner, Storm (King) and his pal The Coroner (Hayes) to help him out. With the pressure mounting and the body count rising (mainly because of Jacob) who will finally flip the KILL SWITCH?

Another year, another Nu-Image Seagal. Frankly, we feel that Kill Switch is one of the worst latter-day Seagals. It’s filled with stupid quick cuts and herky-jerky camera moves that are likely to give you whiplash. The “fight scenes”, such as they are, are repetitive, overlong and poorly executed (but to be fair, they can be unintentionally funny, more on that later), and the plot is nothing you wouldn’t see on any TV procedural. Seeing as Seagal’s name is Jacob in the movie, perhaps the closest parallel is Jake and the Fat Man. But in a wild twist, Jake IS the fat man. What a mind-blower. 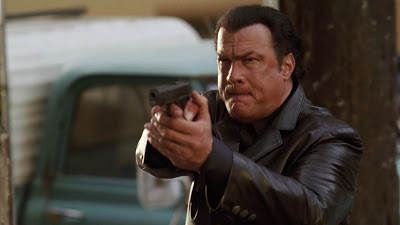 It’s important to remember that this movie came out around the time that Seagal’s reality show Lawman was hitting the airwaves. So we get more police work from a guy with an absurd “Southern” accent.

And seeing as Seagal managed to write the script, other characters call him “a genius” among other compliments, although evidence of genius, or even mild intelligence, are not really on display. Seagal could have written anything for himself, but he chose to make Jacob a horrible torturer, just like the character he plays in Driven To Kill (2009). There’s no possible way an audience can like this character as he’s brutally, mercilessly, amorally, unnecessarily torturing his victims. Adding a miscast Isaac Hayes as The Coroner (Seagal didn’t even bother to give him a proper name) and a partner that looks like a bloated Philip Michael Thomas (interestingly enough, he’s played by another 3-named guy with the name “Thomas” somewhere in there - maybe Seagal thought it WAS PMT and got confused) don’t help matters.

And as for the fight scenes, oh dear...what appears to be happening is Seagal just stands there, while stunt doubles Nicholas Harrison and Dian Hristov (we feel their names should be known to the world, as they are the ones doing all the work) don oversized leather jackets and ridiculous wigs and pretend to be Jacob. The way this is all edited together is laughable. It’s so blindingly obvious it’s not Seagal, a child could see it. Who do they think they’re fooling? And the real crime is that the scenes, especially the first major one in the bar, go on for a ridiculously long time, leaving the viewer ample opportunity to see Harrison and Hristov. If the fight scene had just been “quick and dirty”, as they say, not to mention edited properly, there’s a strong chance we wouldn’t notice the stunt doubles. But no, it’s almost like Seagal wanted us to see them.

If you always wanted to see Zodiac (2007) but with ridiculous hair, here’s your movie. It would be interesting for Seagal to try and play a character that is even a little bit likable. But no, it’s just editing a guy jumping out a window 17 times and tacking on a completely nonsensical ending. Do not engage this Kill Switch.

Brilliant review but I thought this was so bad it was kinda good.

Thanks! There were some unintentionally hilarious parts with the stunt doubles, but the movie itself was a tough sit.

That fight in the bar must be the longest and worst in film history. It takes him about half an hour to waste those two goons and the editing is so bad it's funny. They keep repeating the same clip over and over and over of Seagal's face. I bought this in Iraq in some bootleg dvd store. I left it in my room for the next Soldier.

As if fighting in Iraq wasn't hard enough, this movie must have made that much harder...The next soldier who found this in his room probably used it for target practice! Haha.

So true, so true. I caught up with a lot of recent Seagal flicks in preparation to read Vern's book Seagalogy. This was one of them. Though I felt cheated out of 90 minutes Vern's hilarious analysis of it more than made up for the wasted time.

Just such an ineptly put together film. I think the issue is that Seagal has too much influence over these films. He puts his hand the script, the editing, the fight choreography and it comes off so amateurish.

We need a director like Andrew Davis or Geoff Murphy back to whip in to line.

We agree, this was incompetent even by Seagal standards. One of our friends who is a Seagal apologist, even he couldn't make excuses for this one. But he loves the bit in Out For A Kill where Steve throws the samurai sword out the window.

I acutally did like Seagal's character in this film and thought the fight scenes were fairly well done.

The quick cuts on all the fights were ridiculous. Especially the bit where the guy falls out the window 17 times. Haha.

I don't remember that part, but anyways I thought it was interesting to see Seagal do a serial killer film, so it's his worst film for me(that would be "The Patriot")

That's why we always avoided The Patriot, we heard it was awful.