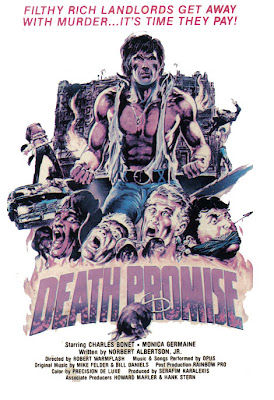 
Buddies Charley Roman (Bonet) and Speedy Leacock (Leacock) love nothing more than training in Martial Arts at the Ridgefield Self Defense Academy in New York City under Master Shibata (Kang). But something is upsetting their normally peaceful lives. Evil, ruthless landlords - and their goons, mind you - are trying all sorts of nefarious tactics to get tenants to move out, such as turning off heat, electricity and water. When Charley’s father, Louis (O’Connell), a feisty ex-boxer, tells everyone to stand strong and not give in, the antagonists graduate to more creative and dangerous means to flush out tenants. Starting all the trouble is a diabolical planning and zoning board, that naturally consists of a team of ethnic stereotypes. Jackson, Albano, Mirsky and Engstrom (Black, Italian, Jewish and WASP, respectively, played by Abe Hendy, Tony De Caprio, Thom Kendell and David Kirk, respectively), headed by the George Plimpton-like E. Bartley Alden (Van Lynn) want the land a particular building is on. And they have shirtless Kung-Fu fighting goons to ensure they get it. When Louis Roman is caught in the crossfire, Charley resolves to make the planning and zoning/stereotype board pay, so he travels to Asia to train even more in Martial Arts. While training under Master Ying (Liu), he meets young, enthusiastic fighter Sup Kim (Louie) who agrees to help him on his quest for revenge. Now with Charley, Speedy and Sup Kim prepared to take on the baddies, prepare for the ultimate real estate war as Charley vies to fulfill his DEATH PROMISE!

It’s hard to put into words just how much we LOVE Death Promise. We, and our circle of friends, have all watched it multiple times and it’s become part of the fabric of our lives. Forget cotton, give me Death Promise any day! It’s even become a sort of shorthand, for example, when discussing a certain movie, we might say, “Well, it’s no Death Promise, but...” Such is the level of awesome-tude we’re dealing with here. To us, anyway, this is an all-time classic and one of our “desert island” movies, for sure. 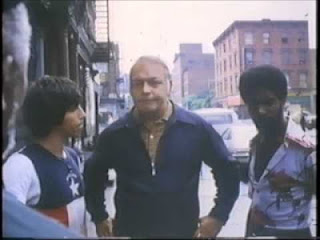 Cementing its status as legendary movie, it was packaged in a big-box Paragon with iconic, unmistakable box art. But the movie within is what counts. It has gritty NYC locations, and the World Trade Center towers figure prominently in the background of many shots, even, poignantly, during the final battle. This was the late 70’s, the height of Bruce Lee mania, and here is a prime example of Bellbottom Kung Fu, where dudes with amazing patterns on their tight, wide-collared shirts kick each other with the massive lengths of fabric at the bottom of their pants. Bill Louie even appeared in Bruce cash-in The Dragon and the Cobra (1980). So while most people were busy waiting in line for Star Wars in 1977, those truly in the know were diggin’ Death Promise.

Stacking another brick in the wall of awesome is the title song by Opus. It’s beyond funky. It’s almost like their mandate before recording the song was “out-funk Shaft, out-funk Super Fly, out-funk Trouble Man, just out-funk everybody”. We believe they succeeded. The song is a new, mutant strain of super-funk. It destroys all funk that came before it. If there’s ANY way to get this song in any form, let us know. As for the movie itself, it sadly was interestingly-named director Robert Warmflash’s only directorial effort to date. We really wish he had done more, but we count ourselves as lucky we have this. It was many cast members’ only effort as well, and the technical aspects of this movie are pretty amateurish, but so what? It adds charm and provenance. Give us a movie that’s a little rough around the edges, but has originality and personality, rather than the soulless Hollywood schlock that’s coming to theaters today. There are some amazing situations and line readings that are absolutely priceless. Death Promise was clearly made for the 42nd Street audiences of the day, who were not well-known for paying strict attention to technical details. Warmflash probably never imagined it would even have a life on VHS, but it does. To us, it will always have a place in our hearts.

Everything about this movie is just so great, enjoyable and fun, from the narration that only appears once at the beginning of the movie, to the overall concept about evil landlords, to the super-secret “Mr. Big” who has a cat and predates Inspector Gadget’s Dr. Claw by many years. Not to mention Mirsky’s car phone - which is a rotary phone (talk about big pimpin’), and the fact that there’s a main character named Master Shibata, but it sounds like everyone is calling him “Master Ciabbata”, which makes him sound like some sort of Bread Sensei. There’s so much more we didn’t even mention. While the magic of Death Promise could never be duplicated, a movie that’s similar in feel is Gang Wars (1976). Both were distributed by classic NYC exploitationeers Mahler film. But only one has Warhawk Tanzania. We’ll let you guess which one.

We can’t speak highly enough of Death Promise. It’s truly one of our favorite films.

I have a copy of this Paragon big-box movie and had a hard time with the print. I'll have to give it a rewatch now, you make it sound to friggin' amazing.

We are impressed you have the movie to begin with! It's definitely worth a re-watch.

Based on your review, I had to check this movie out. It was a solid action movie, and I feel it should be included in any time capsule from the late 1970s. But I'm never going to get the theme song out of my head: "Death Promise, I'm gonna git ya, Death Promise, I'm gonna bloooww yo' mind..." Classic! I love the scene where our hero takes an Eastern flight to what looks like the suburbs(?).

We're glad you enjoyed it as much as we did and can see its classic status.

Maybe it's the time capsule elements that make it so endearing. Opus is clearly one of the greatest funk bands of all time. Once you've heard the song, you're never the same!

This is my favorite bad movie. When I found it in the Big Box years ago I had to have it. It's an incredible movie that has no equals. Great soundtrack, awesome revenge, plot twists, and lots of screaming.

Yes, it has all this and so much more. Thank you for pointing out all the screaming! We're really glad this movie has its fans out there, and you're one of them.

WOW! Thank you all for loving this movie. My husband was the director. He did a great job. He has his own company for many years doing post production. I was Mirskys girlfriend in the car. Check Robert on the IMDB. Thanks again, it seems to have become a cult classic!
Susan Warmflash

You're very welcome. Thanks for stopping by with your comment. Do you have any interesting stories while making it?

This is definitely a classic. Your husband did a great job directing it. It's a blast to watch.

This is now a RiffTrax episode.