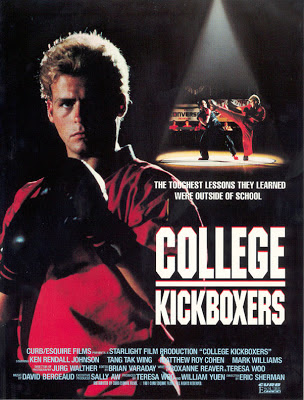 
James Caulfield (McLeod) comes to the town of Millbrook to enroll as a freshman in the local college. He’s a cool dude who loves Martial Arts. His roommate is Mark Brown (Williams), who also is into Martial Arts. At first they butt heads, but eventually they bond over their common interest and similar sense of style. Mark tells James he’s entering the First Annual Millbrook Karate Tournament. The winner gets 25,000 dollars, and Mark wants to use it to found a Karate school for underprivileged children. But “local badass” Craig Tanner (Cohen), who goes around town harassing people with his gang, the White Tigers, also wants to win the tournament.

Meanwhile, James gets a job at a local Chinese food restaurant. He learns that a chef there, Wing (Wing) is a Kung Fu master. After the prerequisite resistance, Wing agrees to train James, but on one condition: that he never fight for money. But when the White Tigers injure Mark and he can’t compete, James must either get revenge for his friend using his newfound skills, or keep his promise to Wing - all while trying to woo Kimberly (Tucker) - can he do it?

Trained To Fight is a highly enjoyable, funny, silly good time. It follows in the tradition of “Master initially won’t teach the student, but eventually relents so student can compete in some sort of tournament” movies such as American Shaolin: King of the Kickboxers II (1991), No Retreat, No Surrender (1986) and Balance of Power (1996), among many others. It’s the type of movie where the centerpiece is training. McLeod is perfectly suited to play the cool, Zack Morris-like hero, and Cohen as Tanner seems to know every racial epithet in the book, and just his hair alone spells “evil”. It seems all he does all day is follow around James and Mark with the sole purpose of haranguing them. What else does this guy do? And to prove that there’s absolutely no racism going on here, the first Chinese dude James runs into just happens to be a Kung Fu master and Acupuncture expert. No stereotypes there. 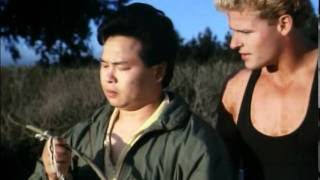 Actually, this movie revolves around the great performance of Tang Tak Wing as...Wing. While this role could have been filled by Leo Fong or Bolo Yeung, Wing steals the movie, and it’s a crying shame he only appeared in two movies. He could have had a Fong-like career.

As far as Kimberly, who, to continue the Saved By The Bell comparisons, is like the Jessie Spano here, it’s puzzling why James - who could easily have any girl he wants - would be so smitten with her. She’s an unlikable, shrill harpy who never shuts up about global warming. Apparently, James melts her ice and she really warms to him. Plus she looks a bit, let’s say, mature, to be a college student. But it’s never too late to further your education.

This movie is very lovable, and even has training methods we’d not seen yet (ice training, among others) - but there’s a mystery as well. You see, during the “brawl at the mall”, there is a display stand for something called “Chipparoo” - which claims to be the “New Taste Phenomenon.” When a baddie gets knocked into the display, all the Chipparoos (?) fall to the ground. Noticeably, Chipparoos never took off in the general marketplace after that. Coincidence? WHAT HAPPENED TO THE CHIPPAROOS? And what is a Chipparoo anyway? As of right now, it’s just one of the flavors that make Trained To Fight worth seeing.

The only thing this movie is really missing is a song. You know, the pumping, driving type of tune that would propel James through his training. How the filmmakers missed this obvious component of this kind of movie, we’re not really sure. In technical news, the Imperial video states the running time as 95 minutes but we had it at 86. It only could have come from the video stores of the 80’s/early 90’s - so enjoy Trained To Fight.

Also check out a review by our buddy, Fist Of B-List!

Good review. This is a fun, if a little goofy, kickboxing flick. Ken McLeod should have made more fight flicks...

Thanks! We agree, Ken McLeod should have done more with his career. He is just like Kenn Scott (Showdown) and Kurt McKinney (No Retreat, No Surrender).