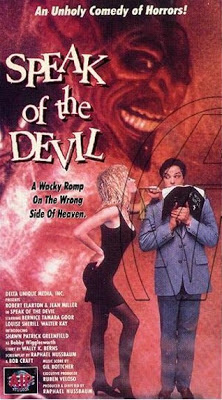 
Jonah Johnson (Elarton) and his wife Isabelle (Carol) are Southern televangelists. They are also con artists, and when their game is discovered, they high-tail it out of the south in a hurry. They travel to L.A. and set up shop in an old dilapidated house, which they then proceed to renovate into their new church/home. Going whichever way the wind blows, they sense the tenor of the times and open a church of Satan called the “Church of Latter-Day Sins”. The church becomes successful, and while Isabelle wants to bilk people for all their worth, Jonah, who after all is still actually a devoted Christian, has second thoughts. But still he dons a ridiculous black leotard and slaughters goats in their basement. While the place is swarmed by terrified plumbers, squatting “punkers”, an IRS agent, and a Rabbi who warn of the evil within, will the Johnsons continue on, or will they pack up and move like they did before?

You may have noticed that this is not an action movie. But in our quest to become the ultimate AIP site, we have to include items like this. We thought it was ACTION International Pictures, but perhaps here they were trying to expand their base and include a comedy. There’s certainly nothing wrong with that, but the problem with many horror comedies, this one included, is that it’s neither funny nor scary. It’s hard to tell the intended audience the filmmakers were going for here. While in theory we would enjoy an anti-PC movie such as this - it takes shots at Christians, Jews, Mexicans, Southerners, trendy L.A.-dwellers, the aforementioned Punkers and just about everyone else in between, but somehow none of the jokes really hit, they lack bite or edge. But what’s interesting about Speak of the Devil is that it is a satire of not just the televangelism trend of the 80’s, but also the Satanism trend of the 80’s. It kills two birds with one stone, and that seems to be the strength of the film.

It does have something of a behind-the-scenes exploitation pedigree, as co-writer/co-producer/director  Nussbaum and co-producer Henning Schellerup (with ‘Script Contributions’ by Scott Spiegel) have noted careers for B-movie fans, but even with some exploitation elements, the result is surprisingly mediocre. The project could have had potential if they went all-horror or all-comedy, but this mix is middling. Plus at 100 minutes it’s too long. You really feel every minute. So while spoofing Jim and Tammy Faye Bakker, as well as Anton LaVey, was certainly the film’s main focus, the most interesting jab came when some characters on screen make fun of Cannon Films. Calling it “Uzi Films”, it mocks their head honchos by re-naming them “Golem and Bogus”. Though surely it was meant only for hardcore fans like us, we thought that was the most worthwhile moment in the movie. We wish they did more jokes like that, rather than some stupidity about a clogged toilet.

While we’ve seen much worse, in all honesty you could probably skip Speak of the Devil.

It really is. Not much to recommend...avoid it.

I've seen it. I still own the VHS. I agree its not a great movie, but it does fill the job as a time-passer -

I played BURN the punk rocker that BURNS