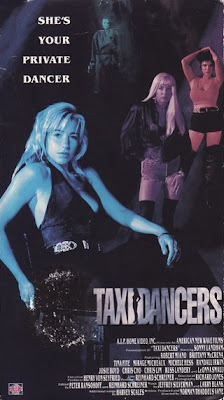 
Taxi Dancers is the tale of the Shark Club and the lives of the girls who work there as “Taxi Dancers”. Centered around Billie (McCrena), it also delves into the exploits of her co-workers. When Billie arrives in L.A., club owner Miguelito (Miano) gives her a job, and co-dancer Star (Fite) allows her to move in with her. Mulleted, strange-looking men come to the Shark Club and “clock out”  the women in order to spend time with them, either dancing, playing pool or just drinking.

If more happens, presumably that’s up to the girls. Billie ends up in a love triangle with longhaired pizza delivery boy Bobby (Irwin) and more successful Texas magnate Diamond Jim (Landham). Meanwhile, Candy (Hess) has legal troubles, Sparkle (Josie Boyd) is a drug addict and owes money to a gang called the Yellow Dragons who then menace the club, etc...but the girls will all have to make hard decisions and face their futures after it all comes to a head on one fateful night...what will they do?

Sure, Taxi Dancers isn’t really an action movie, but AIP did more with their brand than just action. Here, director Norman Thaddeus Vane (who is known for his horror/exploitation work and is profiled in the excellent book Nightmare USA by Stephen Thrower, which everyone should own) delivers a work similar in theme and tone to his earlier Club Life (1986).

Especially surprising in that regard is one Russ Landery, who played the bodyguard Jo Jo. He was really good, and this is his only credited film role to date. But let’s not forget fan favorite Robert Miano, who plays the club owner who is ex-LAPD, an ex-con, and a Vietnam vet. Performance-wise, the movie belongs to him.

As for the music, there’s an R&B slow jam duet in the vein of “Loving On Borrowed Time” which plays over and over and over again. We believe it’s called “Another Close Call” by Harvey Scales. Of course there’s also the time-honored sax on the soundtrack as well.

In the dialogue department, there are several great usages of the word “homeboy”, and naturally there’s the token catfight that the girls get into. But all of this analysis might be moot for many people, who just want to check out the sex and nudity quotient. Director Vane keeps it all toned down, especially for a movie like this, because it appears he wanted to concentrate on the drama of it all, not make a cheap flick for men to leer at. He must have reasoned there are plenty of those out there already. His aim seems to be to concentrate on the lives of the girls. Maybe that’s why nobody but us and Stephen Thrower have seen the film.

It is odd, but worth-watching.

Russ Landery is the actor playing JoJo, not Russ Landry

The spelling error has been fixed. Thanks for pointing that out. :-)