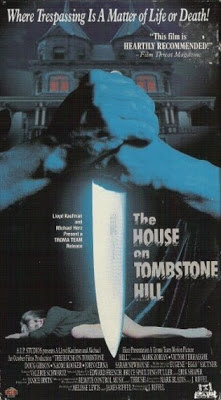 AKA: Dead Dudes In The House


When a group of constantly-squabbling young adults drive out to a creepy old house for an attempted renovation job, they don’t realize they are in for a night of horror. It turns out the house was owned by the Leatherby family, the matriarch of which was a cold-blooded murderess back in the 40's. When one of the moronic kids breaks her tombstone which lies on the property, the malevolent old lady comes back to life and begins not just killing the kids, but turning them into some sort of zombie that will do her diabolical bidding. And, they’re trapped in the house. Will any of these one-dimensional house-flippers make it out alive? Dare to find out...

The House On Tombstone hill is a nice low-budget regional effort that’s a little bit better than you probably think it is. It was released around the time when AIP had some sort of deal going with Troma. So the tape under this title was a joint release from the two companies. Later, when it was wholly owned by Troma, they changed the name to Dead Dudes In the House and found a picture of unrelated homies to put on the front cover. Just why they thought misleading people into thinking there are homies involved in this movie when there clearly aren’t any remains a mystery. Where are the promised homeboys today? Were any viewers disappointed when said homies never materialized? Why did they think that (of all approaches) was superior to the movie as it was? All unanswered questions. But back to the movie at hand... 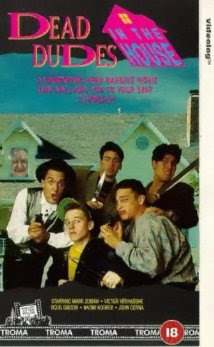 So despite being an AIP/Troma co-release, the whole venture feels very CITY LIGHTS, and anyone who has seen their horror output such as Epitaph (1987) or Hollow Gate (1988) would likely agree. One of the main highlights of THOTH are the makeup and gore effects. They were created by Ed French and his team, well-known in the practical effects world. And they are indeed effective. Without these high-quality gore effects, the movie as a whole would greatly suffer. So while the whole “Old Dark House” theme is certainly well-worn ground, French spices up the proceedings sufficiently enough. Director Riffel does pull off some intense moments, but the pace overall is slow, and there are way too many scenes of characters banging on doors and windows attempting to get out of the house.

The fact that the entire movie was shot at one location - the house - does provide some claustrophobic moments, but it also leads to unneeded repetition. A couple other settings would have been welcomed. As for the cast, they get absolutely no character development or backstory whatsoever. For those keeping track, Bob is the jerk who smokes and drinks and isn’t likable, Mark is the blonde nerd, Steve is the redhead nerd, Jamie is the dark-haired girl, Linda is the blonde girl, Ron is the “normal guy”, and Joey goes out on a beer run. That’s literally it as far as character development goes. If we knew these people just a bit better, we might care about their plight more than we do. But the moments of horror are what THOTH is all about, and they are duly delivered.

The House on Tombstone Hill is not a bad little horror movie and worth picking up if you can find it cheap. But where are the missing homies...?

Hahahaha! That poster is hilarious. What were Troma thinking? Makes it look like some white boy version of House Party!

Haha! That is a really funny idea...they should make that.

Wow, guys. This is hysterical. The missing homies cracked me up more than once.

This review is HEARTILY RECOMMENDED!

Thanks! Happy you enjoyed the review so much. The movie really needed some homies.

This is very unique idea.