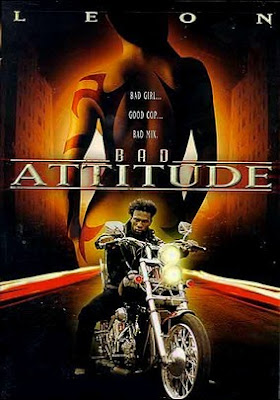 
Eddie Johnson (Leon) is a Seattle Cop On The Edge and motorcycle enthusiast. Due to his rogue ways, he’s busted from detective back down to beat cop. While out on routine patrols with his partner Midge (Hall), they slowly start to unravel a criminal conspiracy involving local street preacher Ezekiel (DeVeaux), and his assistant, former prostitute Mai Lei (Lim). After getting romantically involved with Mai Lei, Eddie is told to turn in his badge and gun. Now he’s going rogue after the mysterious villains in a black van. Will he be able to unravel all the goings-on?

Well, finally Leon gets to step out of the shadows and into a starring role. “Leon who?”, you may ask, but it’s just Leon. No one seems to question his lack of last name. Like Madonna or Cher, Leon can step proudly into the pantheon of one-named stars. His co-star Demene Hall tried to give him a run for his money, appearing in the opening credits as simply “Demene”, but perhaps she found it too “Demene-ing” and appears in the end credits with her full name. Mysterious naming issues aside, Bad Attitude, unfortunately, is an unpolished, stilted, cliche-ridden production. All that would be fine, but this movie has a D.O.A., or “Dearth Of Action”. There’s almost no action in the entire movie. What a waste! Really, what a waste. It should have been Leon on his Harley shooting bad guys left and right. Sadly, the movie is a bunch of unmemorable setups to action that never arrives. A true wasted opportunity.

We appreciate that this was trying to be a more serious-minded movie with a largely Black cast, seemingly on purpose attempting to separate itself from the average “homie movie”, or even 70’s-style Blaxploitation movie. We can almost see director Bill Cummings saying “why can’t this be just a movie, without any racial tags?” But this was to be Cummings’ only directorial effort to date. But Bad Attitude, in the final analysis, lacks drive - it’s slow paced, and has pacing problems on top of that. There’s no title song (although there is a song by Steel Pulse during the end credits), and Leon doesn’t even do any Leon-Fu on the bad guys.

DeVeaux does a decent job as the snappily-dressed Reverend, and Gina Lim, in also her only movie role to date, plays the token hot chick well (but if truth be told she is a bit mannish, especially her voice). Plus, you can tell Leon’s level of attitude (“bad” or otherwise) by his hair part. At first, he has a pretty extreme, conservative part, but as he goes further into rogue territory, the part changes and eventually disappears altogether. An alternate title for this movie could be “Rogue Hair Part”. Also, on T-shirt alert, characters wear shirts for the bands Blood Feast, Negative FX and the Butthole Surfers. It doesn’t mean much, just an observation.

In the end, Bad Attitude is a misuse of Leon and seems to be hampered by its low budget. Wags might suggest the movie would be better off if they took the word “Attitude” out of the title, but we’d just file this one under “wasted opportunity”.

Never heard of this film before, sounds potentially interesting.

BTW would you be interested in trading? I could send you a list of the films I have if you want?

Sure sounds good! Send your list to my email: Tarbosh777@yahoo.com. Can also send you some movies too.

Misuse of Leon is an awesome band name by the by. Would be awesome to see Kings of Leon open for themselves as Misuse of Leon, maybe in masks a la GWAR as electric hellfire club, just completely fuck up their pop songs with misuse and sincerely apologize for manipulating the audience with the total and utter incorrect use of their vibe. Such misuse! Then the audience demands chants for the normal execution of their songs, masks off, and they stick the landing with the perfect use of Kings of Leon and sell a shitload of craft beers and beard wax. Go!

Sounds great! Would be better than the movie for sure. Haha

sad excuse for a movie i worked my ass off and stayed sober for throughout pre production with heidi walker during the filming
and post production...ty chris cornell for dancing my night away when i was made to accompany the non star leotard er leon when he was fukin the art director, slapped him when he tried to kiss me and told him get the fuk outta my car and make sure your not late for filming in the am i need some sleep for am filming...i only have time for a quick change and shower...he even blew our 1 scene i was begged to be in... bloodpack on 1st take didnt rupture, so we had to take 2 more, i nailed it but the main character had appearent focus issues with next 2 takes...i wasnt thrilled with the cut that made it in as "sally" the heroin addict, a part i had to research watching junkies on capital hill in seattle cuz i was unfamiliar with their behaviors. debbydodd btw ... never wanted to marry eric lee dodd... but my dad made me as i was running away from the church that day...hugest mistake next to volkert which i was talked into by again family..aka brawford.... i was always some1 elses love. but prearranged marriages suk ass or should i say ...derranged ones... they will never have my love. ever. ...the queen e aka bee and or "foster" as in orphan

Thanks for writing with all your behind the scenes info!