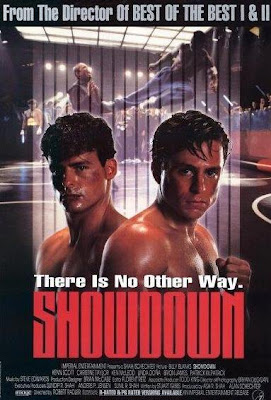 
Ken Marx (Scott) is a 35 year old high school senior (judging by sight anyway) who transplants to a new school filled with punks, ne’er-do-wells and miscreants. But Ken is just your good-hearted American guy. He quickly makes friends with class clown Mike (Asher) and develops a serious crush on the beautiful Julie (Taylor). But there’s a problem: Julie’s boyfriend Tom (McLeod) is an angry, smothering jerk of the highest order. He goes to Martial Arts training under the militaristic, inhuman monster Lee (Kilpatrick) who teaches his students to have no mercy. Though he’s in over his head, Ken teams up with Billy (Blanks), an intriguing man who is the school janitor but was a former cop.

Billy trains Ken extensively in Martial Arts so he can defend himself in general and against Tom in particular. It all comes to a head at the evil dojo where, unsurprisingly, Lee stages underground Punchfighting matches. Who will be victorious in the final SHOWDOWN?

You gotta love these high school-set action movies. They range from annoyingly bad (Detention, 2003) to lots of fun (A Dangerous Place, 1995). Thankfully, Showdown falls towards the latter. It’s entertaining, fast paced, and enjoyable. If you’ve seen A Dangerous Place, you’ll note the similarities. We’ve all seen the “troubled school” scenario - kids acting wild, smoking, and even - just so you know things are out of control - riding skateboards in the halls. Brion James does nothing in this movie except harangue students and exhort to them the school rules. We’ve never seen him so animated, and he put as much life into the small role as he could, but James should have been given more. 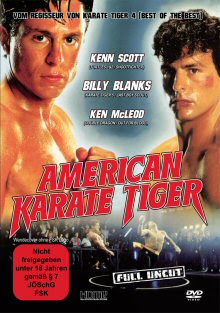 Billy Blanks this time around is administering the training, as opposed to receiving it, a la Balance Of Power (1996). He’s even called at one point “Kung-Fu Janitor”. We never get tired of training sequences, especially if they have the right song behind them. In this case, “Draw The Line” by A.Z.R.O. fits the bill nicely. Playing opposite Billy as your classic evil sensei is Patrick Kilpatrick, who puts in an over the top performance. He’s not quite at John Miller levels, but seems to be aiming for it. So needless to say, we enjoyed it wholeheartedly.

Compare and contrast to Marshall Teague’s performance in A Dangerous Place for further examination. Kenn Scott as Ken Marx clearly is stretching his acting chops, playing a dude with only one “N” in his name.

There are classic 90’s wisecracks, humor and sarcasm on display, and even a few movie references. It was obvious that the 90’s were upon us at this point. But rather than be irritating, it’s aged well, especially if you have nostalgia for that period in time. Clothing is the same way - note the color schemes which seem to include a lot of purple. Predating the current trend of constantly “raising awareness” about bullying, this movie should be shown in high schools (is that why there’s an edited version?). But director Radler (of Best of the Best 2 (1993) and The Substitute: Failure Is Not an Option (2001) - sticking with the whole high school theme) keeps things upbeat and moving at a good clip.

At the evil dojo, there are posters for China White (1989), Trained To Fight (1992), Black Eagle (1988), and King of the Kickboxers (1990), which featured Billy Blanks. It’s interesting to spot them, and some of them are fellow Imperial titles. The referential thing pops up again.

We liked Showdown (not to be confused with the Leo Fong Showdown, 1993 though we liked that one too), it’s an enjoyable film and is worth seeing.

I completely agree with your review. The music was great, too. I have always wondered why there was both a PG-13 and an R-rated version. Karate Kid crossover potential?

This was fun, though not quite as fun as Detention.

Another intersting "high school fight" film is "Only The Strong"

Never saw Only The Strong with Dascascos...Will have to check it out one day. Looks like fun.

This one looks like a blast. I think Robert Radler is one of the most underappreciated action directors out there.

It is definitely worth watching...Radler also directed The Substitute 3...which is also underrated.