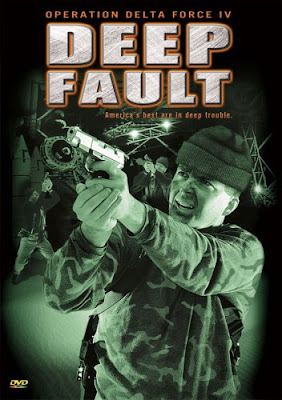 
“Mac” McKinney (Lara) leads his fellow Delta Force soldiers Sparks, Hutch and Vickers (Hudson, Williams and Messner, respectively) on many dangerous missions which mainly include going to depressed-looking eastern-European countries and shooting people. But they’re going to face their toughest challenge yet in the form of megalomaniacal baddie Olivio Garcia (Laughlin), a man who’s so demented he wants to use nuclear weapons to trigger massive earthquakes. Naturally he does all this from his underground command center (where do these baddies keep finding these things?) - so the soldiers bring along token female scientist Laurie Granger (DuMond) to try to use science to try and stop him, or something like that. Will our brave heroes stop this madman from earthquaking the world to death? Find out today!

So let me get this straight: there’s the Delta Force series, the Operation Delta Force series, the American Heroes series, and the U.S. Seals series, and they’re all separate entities, all doing their own thing. Assuming I’m correct here, let’s move on...Nu Image really knows how to churn out some serious crud. It’s nigh-impossible to imagine someone renting this in a video store. Patrons who haven’t seen the first three movies in the series will surely be scared away at the prospect of a fourth, and only die-hard fans are going to stick through four movies of this and beyond.

So it all gets a bit confusing, but director Mark Roper doesn’t help matters by giving us an unfocused, Gary Daniels-less movie that has plenty of very dumb moments. But, in an interesting twist, it’s these little moments that keep this movie afloat - barely. There are enough tiny little instances of something funny or somewhat interesting happening that pop up every few minutes where you say, “oh, okay, this isn’t so bad”. Just check out what happens during the snowboard/snowmobile chase (which feels a lot like AIP’s White Fury, 1990), the train shootout or one of the many scenes of gun-shooting. So while there are some glimpses of worthwhile-ness, this movie should have had more character development, explained what was going on just a bit more, and trimmed the constant battle sequences. If the movie had done this, it would have been a lot better. 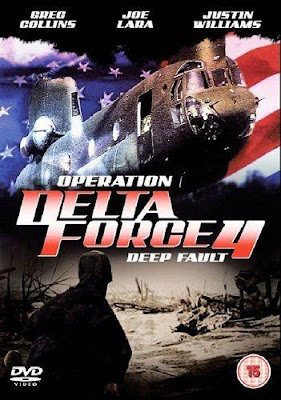 If you are looking for a movie about breakaway seismologists, where characters wear T-shirts that proclaim “models suck” to the racquetball court, here you go. It also seems pretty influenced by The Soldier (1982). Thankfully there’s no CGI, or the proceedings would have been horrendous. But for the main baddie, the casting department found a man so generic-looking for this type of role, perhaps they thought they could confuse viewers. This “I’m not Wings Hauser or Peter Bogdanovich or Bruce Boxleitner or Barry Bostwick or Warren Beatty or Bruce Davison or James Spader” baddie also has an evil scarf. So you know he’s evil.

As far as the climax of the movie, it takes up far too much time. A climax is supposed to be exciting and somewhat brief. Here, it just goes on and on and on. That drains it of urgency and it just feels listless. So the climax should have been an actual CLIMAX and not an interminable time-filler. That just adds to the overlong feel of the whole movie. It kind of grinds to a screeching halt at that point.

Operation Delta Force 4: Deep Fault is yet more Nu Image filler. All their non-Isaac Florentine-directed movies are not that great, and this just isn’t memorable. It doesn’t stand out from the pack in any way. To quote one of the great Delta Force Soldiers (this was the 90’s, don’t forget), “PEACE!!!!”

It's been soooo long since I've seen these movies.

Back in the early 00s Nu Image released these massive 12 DVD collections in the UK for a few quid each.

Me and friends bought loads of them and watched them for a laugh and take the p*** out of them.

I remember watching all the Operation Delta Forces. I think I'm right in saying that they were all written by the same guy and the first four feature all the same characters - Skip Lang, McKinney, Hutch and Sparks.

Anyway, I remember being really disappointed with Part 4. Firstly, the action was few and far between. Also they used some of the cast from Part 3 (which was probably the "best" of the series) but put them in different roles.

So Greg Collins for example played McKinney in Part 3 but and then Skip Lang in Part 4. Also Joe Lara was the bad guy in Part 1. Talk about confusing.

Also this one has a real bummer of an ending. Doesn't (SPOILERS) Skip Lang die?

That's great your buddies bought these movies back in the day.

I think he does die, not sure, we saw this a while ago. Haha.

Jack, you make some good points about this "series". Continuity was not one of their strong suits.

And you guys hit the nail on the head with the term "filler". These movies existed for sole purpose of clogging up video store shelves.

And thanks for the link too, I appreciate it.

Gotta disagree with you on this one, I thought the action scenes were really well done and I did find the climax pretty exciting, this is my favorite film in the OPD series. I think most Nu-image are pretty good, i've rented quite a few of their films from the video store, I love the American Heroes series and I would highly recommend "Target Of Opportunity"

Video Vacuum: No problem, happy to link you. Just too much filler. If it was tighter, it could have been better.

I have to agree with Venom on this one. The movie has plenty of action. The second best in the series after part 2 IMO.

It definitely had some decent action, but just one too many lulls and filler.