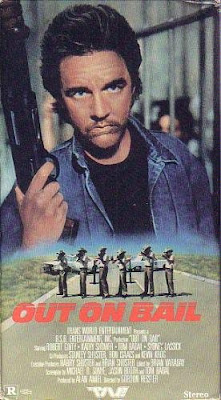 
John Dee (Ginty) is a drifter who isn’t looking for trouble, but trouble always seems to find him. He rides the rails into the dusty ol’ town of Fairfield (we don’t know what State it’s set in, but the movie was shot in Johannesburg, South Africa) and instantly runs afoul of the corrupt cops, led by Sheriff Taggart (Badal). Dee forges a relationship with innkeeper Sally Anne Lewis (Shower) and her mute son Jimmy (Dewaal Stemmit), and just while they’re learning to love John Dee, he gets put into the local jail and needs local attorney Otis T. Smiley (Lassick) to defend him. But John Dee is a man who can defend himself, so to clear his good name and get to the bottom of the conspiracy that goes all the way to the top, he takes the law in his own hands. But will he be OUT ON BAIL long enough to get to the truth?

Out On Bail is fan-favorite Robert Ginty at his best. He delivers an intense performance and the audience grows to really like him. Under the direction of Gordon Hessler, an experienced guy who also directed Sho Kosugi at his best with Pray For Death (1985), and another Sho vehicle, Rage Of Honor (1987), among many other things, he brings out the best in Ginty. The movie itself has a cool, tough vibe, and is underrated. Despite a valley of slowness in the middle (brought on by its slightly excessive running time), a DVD release should be in order, because this is a film more people really should see.

Besides the great Ginty, Tom Badal puts in an excellently smarmy and hate-able performance as Taggart. It’s always nice to see Kathy Shower as well, and, as if her name subconsciously leads to this, there’s a shower scene with her (yay!) and Ginty (boo). Sydney Lassick is also a name that continually pops up. Take The Art Of Dying (1991), for example. His personality is pretty funny and wacky - he truly was the Rich Fulcher of his day. Plus the fact that his name is Otis T. Smiley should tell you all you need to know about his character. But Out On Bail on the whole is not comical, It’s just Lassick who provides a bit of comic relief at times. 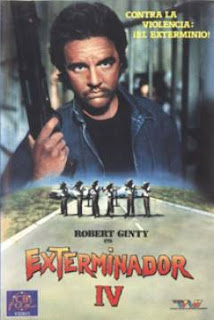 The movie has a great opening, and it’s hard to maintain that energy level throughout the entire film. There are plenty of stunts with shreddin’ guitars behind them, both at the beginning and the The Gauntlet (1977) - inspired ending. Out On Bail does inDeed deliver the goods, as it’s a well-written and executed action film, that packs a surprising emotional punch as well. We give our full blessing to this highly entertaining film.

Released on the TransWorld label, and featuring the end credits song, “Now You Want To Leave” by Bridget Michele, Out On Bail is worth seeking out.

I love that foreign cover. Exterminator IV. What the hell?

Shame this isn't on DVD. Sounds like a good one. Hessler did a great job on those Sho Kosugi flicks.

Love Ginty, it's a damn shame he died, some more of his films I would recommend are: Three Kinds Of Heat, Gold Raiders, Doublecross On Costa's Island, The Prophet's Game, Vietnam Texas, Cop Target, The Bounty Hunter, Code Name: Vengenace, White Fire and Lady Dragon.

We are big Ginty fans too. White Fire is awesome. Always wanted to see Cop Target and The Bounty Hunter.

Robert Ginty and Charles Bronson are much missed "vigilantes." Beside the Exterminators, I recommend Gold Raiders (who could forget the hang-gliding motorcycle?), Mission Kill and Code Name Vengeance. Bounty Hunter was released as Exterminador III in Spain, so that explains the Exterminador IV title.

Thanks for the info about the alternate titles.

Ginty is sorely missed. This one looks pretty classic. I'll have to track it down. Your review defintely has me curious.

This definitely has some classic Ginty moments. He will be missed.

I LOVE Ginty. And I always love your reviews. Half my collection are movies you guys like. I'm actually surprised you guys reviewed Out on Bail. It's been one of my favorite of Ginty's.

Cop Target is, hands down, one of Ginty's best. His performance alone is well worth checking out. And there's plenty of great action. Though the woman he's suppose to protect is aggravating. But he does star with Charles Napier.

The Bounty Hunter is interesting. I personally didn't like it too much cause there was little action. There was quite a bit of drama to this one. He did a better job on Vietnam, Texas. But still a solid Ginty. 100%

Call me crazy, but I've always had a soft spot for Programmed to Kill. It was released by TransWorld as well but it had a serious Cannon vibe to it.

Thanks for the heads up about The Bounty Hunter and Vietnam, Texas.

Been comin' to this site for years! Only now I decided to step in. Shoulda done that a while ago. You guys have great taste in movies. Loved your Hit List review. One of my personal favorites.

White Fire is absolute classic Ginty. You just can't beat that bastard of a mustache. Yet, I can't help be disturbed White Fire. He tries to bag his sister! LOL. But what's a trashy movie without trash? And the Ginty 'stache. It make another welcomed appearance in The Bounty Hunter.

Scarab is another interesting Ginty thriller. Very strange movie. He plays a reporter who's a ladies man and rides a motorcycle without a helmet and listens to his walk-man a lot. It was nice to see him in a much different role. I don't think he even touches a gun. Rip Torn appears in a very bizarre role as well.

His TV-movie pilot Hawaiian Heat was a lot of fun too. Very energetic performance from Bobert. Quite an action-packed start to a failed series. Would LOVE to see the other episodes. Bet they were just as good!

Slightly unrelated note, I'd like to recommend some movies you guys may get a kick outta: Dirty Games with Jan-Michael Vincent, The Taking of Beverly Hills with Ken Wahl, and Run with a young Patrick Dempsey. Don't be fooled. Very exciting stuff

Thanks for the nice words!

That was really creepy in White Fire. Can't do that today! We have seen Taking Of Beverly Hills (Review coming soon). We are working on seeing Scarab and Dirty Games.

Thanks for the recommendations!