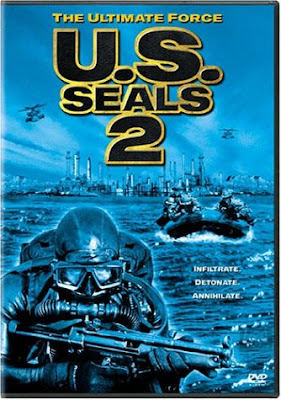 
Lt. Casey Sheppard (Worth) and Chief Frank Ratliff (Chapa) were former colleagues and SEALS. But as often seems to be the case, Ratliff turns evil and goes to a remote island to construct and then launch a nuclear warhead. He even kidnaps Dr. Jane Burrows (Connor) to help him do it.


So Sheppard assembles a team of fighters to go to Ratliff’s island (which sounds like it could be a kids TV show) and stop his nefarious plan. But not only does Ratliff have his own team of evil fighters, but there’s a gas leak on the island, so no guns can be used. It can only be non-firearm weapons and Martial Arts prowess. Will Sheppard be victorious over his former mentor? Or will he blow up the world as planned?

The great Isaac Florentine strikes again with this winner of a movie. The man understands action and his movies are a joy to watch. He is singlehandedly keeping the reputation of Nu-Image afloat. Here he applies his skills to one of our favorite genres: the “assemble a team” movie. Best seen in the great Kill Squad (1982), it’s where a mastermind goes to different locations to, well, assemble a team of diverse fighters with diverse skills.


The result in this case is nonstop action done with a lot of energy, sly humor and over-the-top mannerisms. For example, when characters move their head or hands, there is this cartoonish “whoosh” sound effect. We’re not exactly sure what Florentine was going for here, but it adds to the fun and we figure it must be a by-product of his time working on Power Rangers shows. We suppose he thought that, for the first hundred or so years of filmmaking, when people in movies moved their head or hands and it didn’t sound like a jet was taking off, Florentine felt something was missing. Now he’s here to correct that. 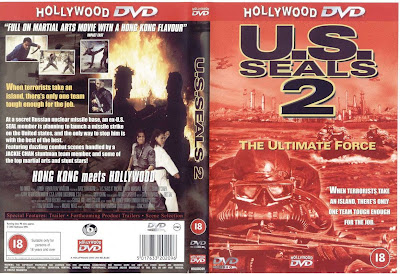 While this movie is well-thought of in action movie circles, we think it could have reached an even wider audience if not for the packaging and marketing. Just by looking at the box art and title, you think it’s going to be a standard military slog with nothing really to recommend it. Presumably, video store patrons back in ‘01 felt this and kept browsing for something else, leaving it on the shelf. To quote Dana Carvey’s impression of John McLaughlin, “WRONG!” -- this movie has almost nothing to do with Seals, per se, it’s an out-and-out, brawling action movie, with killer Martial Arts, stunts, shooting, guard tower falls, a high kill-count, blow-ups, and everything action fans crave. The movie starts off with a bang - literally - and doesn’t let up. Ignore the misleading presentation of this movie and pretend its subtitle is its main title, “The Ultimate Force”, and you won’t be disappointed.

Damian Chapa was a very good choice as the main baddie. He just looks evil. Even his name, “Ratliff”, sounds evil. The thing we’ve always wondered about bad guys that want to blow up the world with a nuclear bomb is, where are they going to go? Even if it’s not the whole world, do they really want to live in a remote part of the globe, especially while there is so much radiation around? That aside, it’s great to see Chapa, who appeared in Hitman’s Run (1999) and Street Fighter (1994), go up against Michael Worth, the star of Fists of Iron (1995) and Final Impact (1992). Truly it’s the DTV war you’ve been waiting for.

All the noises, sound effects, angles, dubbing and musical stings clearly identify this as a Florentine movie, because these techniques are seen in his other work such as Bridge of Dragons (1999), etc. If you’re not already a fan, this may win you over and make you one. See U.S. Seals II.

Also check out reviews by our buddies: Explosive Action, The Video Vacuum, and Good Efficient Butchery!

Hell yes. This film is absolutely awesome. Probably my favourite Nu Image flick and way, way better than US Seals 1. It's like an super violent episode of GI Joe come to life.

Completely agree. This deserved to have it's own title not just be an in-name-only sequel. The fights scenes are wonderfully imaginative. Why have a sword fight standing up when you can have a sword fight while hanging upside down.

The only issue with the film is that you have to turn your brain almost completely off to enjoy it. If you're bother by questions like why the heroes can't use guns (because of the gas leak) but can use swords (which would surely make sparks if they hit metal) then this isn't the film for you.

I'm definitely digging this one out of my collection for a rewatch.

Love this comment. This is such a blast! Totally worth re-watching soon. All the fights are fun to watch.

Jack-Actually it's pretty rare for sparks to occur when striking metal with a sword, see here:http://tvtropes.org/pmwiki/pmwiki.php/Main/SwordSparks

Just checked out imdb. Michael Worth seems to have turned director and is currently doing a film called Bring Me the Head of Lance Henriksen with Tim Thomerson.

Venom: My bad, I've clearly been watching too much Highlander...

I completely agree with your review. I really liked the first part. There is a third part also, but I haven't seen it. Michael Worth should have made more action movies. Two more great movies he made were the PM productions Street Crimes and To Be The Best, the latter directed by Joseph Merhi himself.

Saw the 1st and 3rd years ago, don't remember much...also saw those Worth movies you mentioned...have to re-watch those in the future!

Great NU Image flick! I skipped the first and went straight to the second. I also have the third to watch at some point, aka "Frogmen".

Terrific review. This one is quickly becoming a favorite in my household. Thanks for the link too!

Explosive Action: What about the infamous and unreleased O.J. Simpson "Frogmen"...co-starring Louis Mandylor?...unfortunately, it's confiscated in the property of the Los Angeles Police Department.

Video Vacuum: Thanks! You're welcome about the link. What are some other current favorites?

Actually "Frogmen" was never used as evidence in the case against O.J., the rights eventually reverted back to Warner Bros who placed the film into their vault after deciding that airing it wouldn't be the best idea.

Though I do have to wonder if it would be possible for someone to buy the rights to put that film on DVD?

Would love to see this on DVD. Maybe it will see the light of day.