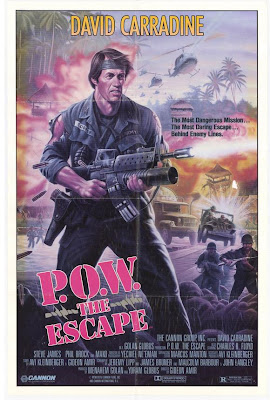 In Vietnam, 1973, the military top brass is told to free all the P.O.W.’s. In order to do this effectively, they call in Col. James Cooper (Carradine), who, naturally, is “The Best”. Of course, he also has a bad attitude and is getting on in years. Once he finds the prisoners, one of which is Johnston (James), all the men lead a daring escape through the jungles of ‘Nam. Along the way they’ll have to fight tons of NVA soldiers, evil camp commander Capt. Vinh (Mako), among other pitfalls, while fighting to stay alive and recapture some gold bars. Can they do it?

By this time, Cannon had already made Missing In Action (1984), so they probably figured, “‘why not try ‘P.O.W.’”? Instead of Chuck Norris or Michael Dudikoff, their main staples, they opted for David Carradine. He’s not quite as belligerent and surly as he is in Future Force (1989) and Future Zone (1990), but roles like this, where he’s put in the driver’s seat as an action hero with terse dialogue, certainly paved the way for those. His dialogue pretty much consists of soundbites such as “I’m goin’ back for ‘em” and “Everybody goes home”. This might be less noticeable if he had some non-bumper-sticker-like dialogue anywhere else in the movie, but he doesn’t. As far as his attitude (i.e angry), it seems Cannon will just give you a more assertive demeanor at times. For example, for Chain Of Command (1994), they probably just said to Dudikoff, “be angry”. We’re guessing they did the same here for Carradine. 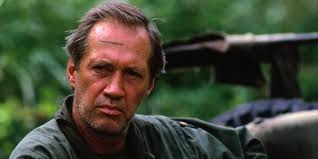 POW: The Escape is your basic exploding hut/helicopter/guard tower movie where people are constantly firing machine guns under the green foliage. But you gotta admit, those huts had it coming. There’s the Prerequisite Torture as well. Not of the huts, of the humans. Thus, the movie is quite repetitive, as there isn’t enough material here to properly fill a 90 minute feature. Not that any of this is bad, it just feels very, very familiar.

As far as the rest of the cast, there are some familiar faces: we are fans of Mako and he does a decent job as the commander who might secretly have an affinity for America. Steve James remains one of the most underrated actors of the 80’s and beyond and his presence livens things up considerably. In the background doing small roles like “G.I. #4” and “Soldier at Fuel Depot” are Willie Williams, Henry Strzalkowski, and Cris Aguilar. Among the smaller players is fan favorite John Barrett, who is also credited as a stunt coordinator. If you watch any of these Philippines-set actioners, these names will ring a bell.

But none of them can possibly top Carradine, when, in a moment of inspiration, he takes an American flag in danger of burning down - this is during a firefight, no less - takes it off the pole, puts it over his shoulders, and continues killing badguys with his machine gun! He’s literally draped in the flag as he fights those stupid, stupid commies. God bless the 80’s.

Released by Media on VHS (and laser videodisc!), POW: The Escape is standard jungle action, with maybe a few blips of interest within that framework.

P.O.W is like a marriage between M.I.A and Kelly's Heroes (gold bars). Cannon Films, fuck yeah!

haven't seen the movie for ages. Must watch it again.

Too bad Steve James didn't get roles as the main badass. Great charisma this guy. In American Ninja (1 & 2), he steals the show.

Mako is another favorite face. Narrator and wizzard in Conan, Akira in Conan the Destroyer and again the wizzard in Highlander III. (This guy has a thing for wizzards)

Make and Steve James are always in top form. If you want to see a Steve James starring role, check out Street Hunter. Solid action and a fun Reb Brown performance too.

You made my day! Thanks Ty.

You're welcome! Looking forward to your opinion.

Thanks! This is a blast to watch. Gotta love the 80s, they made so many fun Rambo-type ripoffs in the Philippines!

I dug this one a lot. Took me a while to find our local VHS release. No idea there was a LaserDisc, that is something to look out for!

That would be cool to see a laserdisc of POW. That's great you enjoyed the movie too.