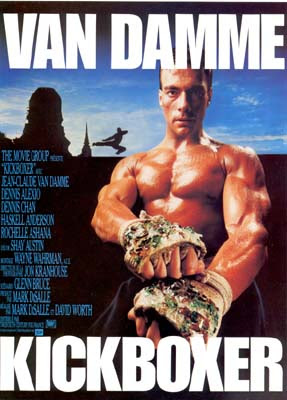 
Eric Sloane (Alexio) is a champion kickboxer in the United States, so, seeking new triumphs in the ring, he travels to Thailand. With his brother/ringman Kurt (Van Damme) by his side, he feels he cannot lose. That is, until he faces off against the most fearsome fighter in Thailand, if not the world: the dreaded Tong Po (“himself”...actually Qissi).

Despite Kurt warning him to not get in the ring with him, Eric pridefully ignores his brother and fights Tong Po. The evil Po mercilessly beats Eric so badly he paralyzes him for life. Seeking revenge for his brother’s crippling, Kurt sets out to learn Muay Thai and beat Tong Po in the ring. No school will accept him, so, working on a tip from ex-Special Forces Vietnam vet Winston (Anderson), Kurt goes into the Thai countryside to receive lessons from master Xian Chow (Chan). Chow puts him through his paces, but Kurt ends up falling in love with Mylee (Ashana) in the meantime. Gangster Freddy Li (Lee) has bet millions on the upcoming fight between Kurt and Po. After Tong Po assaults Mylee, Kurt wants revenge, so with all the pressure building, will Kurt defeat Tong Po?

Here’s another Van Damme classic from the golden year of 1989. Most people, even if they’re not action fans, are at least aware of Kickboxer. Even a David Letterman “Top Ten List” of the day featured the topic “top ten things overheard while waiting in line for Kickboxer”. Underground fighting movies had hit the mainstream and had their brief moment in the spotlight. And Van Damme was spearheading the trend, thereby becoming one of the faces of the action movie movement of the late 80’s/early 90’s.

While Kickboxer falls squarely in the middle in terms of the quality of his Punchfighting era (the best being Bloodsport, 1988 and the weakest being The Quest, 1996 - as always it’s open for debate but that’s our opinion), it has a “much imitated, never equaled” kind of feel to it and even though it’s a little on the long side, it never really gets boring. 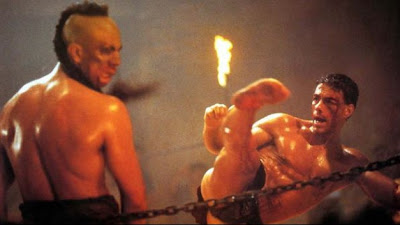 It may be a bit of a stretch to believe Alexio and Van Damme are brothers, but, that aside, in the movie, Eric disregards Kurt’s advice to not fight Tong Po, thus reinforcing the old saying “always listen to your Van Damme”. But the brothers in Bangkok do share a genetic sense for fashion, as stonewashed denim vests and half-shirts seem to be the order of the day.

But Van Damme steals the show in the wardrobe department when he unleashes what can only be described as a tanktop with suspenders for straps. And for no explained reason, for the final face-off with Tong Po, they are BOTH wearing silly loincloths that leave criminally little to the imagination. How did they both know to wear a freakin’ loincloth to this particular battle? Presumably they didn’t talk beforehand and arrange it - it’s surprising they both weren’t embarrassed, like two women who wear the same outfit to a party. 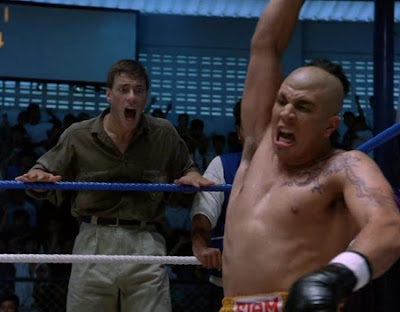 There are some excellent and picturesque Thai locations, there’s a great song at every turn which smartly keeps the energy going (most of which are by AOR artist Stan Bush), and at one point one character says to Van Damme, “I’m not signing your death warrant”. Seeing as the movie of that name came out the next year, could this line be an inspiration?

Also in 1990 came a similarly-themed movie to Kickboxer, The King of the Kickboxers (1990), where Keith Cooke takes over the rural Thai trainer role. But one thing that movie does not have, nor any of the myriad “training sequence” movies that followed in its wake has, is one very important element: the “Van Damme” dance. Yes, part of Kurt’s training is to go to a roadside cafe, get drunk, then bust a move with some local ladies. The movie pretty much stops - as it should - so we can see Van Damme get funky on the dance floor. Not since Breakin’ (1984) where he claps along to the beat in his wrestling singlet have we seen his expertise with rhythm. Definitely a movie - nay - a career highlight for JCVD. He should have danced more in his movies.

One other note: like how in Best of the Best 2 (1990), the name “Brakus” is constantly and continuously said throughout the movie, here the name “Tong Po” is the constantly-said name. These writers were sure proud of their bad-guy names. While the popularity of this movie led to the inevitable flood of sequels (where Sasha Mitchell replaces Van Damme), this original is truly a “video store classic” and a worthy movie in its own right.

Great review. Still one of Van Damme's all time best."He should have danced more in his movies" - yes he should have! That scene still cracks me up...

This is definitely one of my favourite Van Damme flicks. Love that Stan Bush soundtrack, "Never Surrender" is somewhere on my ipod.

Tong Po scared the hell out of me as a kid. He was so relentless and evil.

Must get around to watching the DTV sequels someday. I hear that Tong Po turns up in them still bearing a grudge!

Drive2: Thanks! He should have danced in The Quest. Would have helped that movie a ton.

Jack: Tong Po is great in the sequels. Very menacing. That's awesome "Never Surrender" is on your Ipod. Killer tune.

I too have "Never Surrender" on my iPod! Stan Bush's "Kumite" from Bloodsport was one of the best action movie tunes from the 80s.

I like a lot of JCVD's early work, especially his Cannon movies, which Kickboxer was. You nailed it when you ranked it below Bloodsport (easily JCVD's best movie) but better than The Quest.

As cheesy as the sequels were (it's hard to look at Sasha Mitchell and not think of his as Cody from Step by Step), they did have some decent action scenes.

Haha, Sasha will always be Cody from Step by Step.

Love the Kumite song. Its such a catchy tune.

Great review of a classic. You can't top Van Damme in his prime. Keep 'em coming!

Thanks! We have reviews of the sequels (except number 5..we don't recognize The Dark Kumite...haha) coming soon.

You're absolutely correct in ranking Kickboxer below Bloodsport. Kickboxer is still an 80s classic. The Stan Bush soundtrack is awesome as usual. Tong Po is not a Thai name, and both guys to play him were from North Africa. Hmm?

Hmm, odd about Tong Po...The soundtrack is definitely the stand out.

It is overrated.. King Of The Kickboxers rips it off and does it ten times better. Though Kickboxer does have some nice slomos and kicks to the head with good soundtrack .. And the dance scene was good.

Agree with all your points! The DTV versions can be better. This is a perfect example!