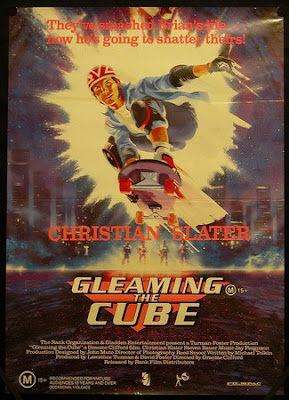 Brian Kelly (Slater) is a teenager and radically awesome skateboarder who just lives to be rad in that awesomely 80’s kind of way. He has a close relationship with his Vietnamese adopted brother Vinh (Chudabala) and has a close circle of skateboarding-obsessed friends which include Buddy (Hawk) and the wonderfully-named Yabbo (Perlich). Brian’s life is turned upside down (in a bad way, not a skateboardy kind of way) when he witnesses a murder and must piece together how his beloved brother was involved in the shady dealings. Det. Al Lucero (Bauer) is officially working the case, but Brian goes rogue, or, more accurately, goes rad to uncover the truth by himself. But it’s going to take all his gleaming power to solve this cube. Can he do it?

If you love the 80’s as much as we do, you’ll be in hog heaven watching Gleaming The Cube. The clothes and hair alone will send you into a state of awesome overload. Not to mention the music, most notably the title song by James House and “Brother to Brother” by Billy Burnette. The set design is also great, especially the posters in Brian’s room. Christian Slater as Brian is the ultimate California 80’s cool kid, sort of a cross between Zack Morris and Bart Simpson. Plus, if you’ve ever wondered what it would be like if Jack Nicholson was a skateboarding teen, here you go.  Brian listens to skate rock on his walkman and T-shirts/posters are seen for The Cramps, D.R.I., Megadeth, Suicidal Tendencies and many more. One of Brian’s best fashion statements is his acid-washed dark denim jacket with a Metallica patch on the sleeve. We want to be Brian Kelly. 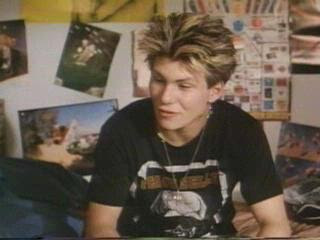 Interestingly, Vinh works at a Vietnamese video store called Balsa Video. It looks like it was a real location. I wonder if anyone who grew up in the L.A. area can confirm this? In other location news, Yabbo (we all need a friend named Yabbo) doesn’t have a room...he has an underground bunker, sort of a converted bomb shelter! How cool is that! Also, skateboarding isn’t just a mode of transportation or lifestyle for Brian. Whenever he’s feeling overwhelmed and frustrated, he skates hard to release his aggressions. 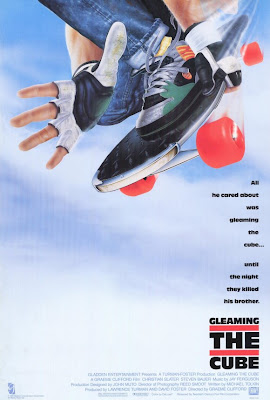 As far as the movie is concerned, you’ll be riding high with all the music, cool hair, clothes, decor, skateboarding and nostalgia, but if truth must be told, it is a little bit repetitive, especially the relationship between Brian and Lucero, and the running time could have been trimmed by a few minutes, but these are minor quibbles. No movie is perfect. There’s really a feast of things to enjoy in GTC, it almost feels disingenuous to point out any of its tiny flaws. There are some very cool stunts and even a blow-up or two. You just have to love it.

We definitely recommend this slice of 80’s magnificence to everyone.

Gleaming The Cube is a great film. It's a fabulous slice of 80s escapism. As you say it's an overload of cool fashions, music, and ludicrous plotting that was only successfully pulled off in the 80s. Slater really made some gold in the late 80s and early 90s and it's a shame his career has got so off track. He really deserves a career revival because he's got great charisma.

Oh, and congratulations on your 800th review. A great achievement.

Slater was great in this. He has always been fun to watch. Especially in Pump Up The Volume and True Romance. It was cool to see back on the big screen in Bullet To The Head with Sly. He needs another killer comeback role ala Mickey Rourke in the Wrestler.

Thanks! We really appreciate that about the 800th review.

Awesome review of an awesome movie. As a skater in the '80s, I must've watched this a dozen times on HBO back in the day. I remember the brief "making of" feature they showed about the film. It featured Slater on a giant skateboard that was just out of camera view so he wouldn't fall off. Hilarious. HBO always had the best behind the scenes stuff.

Thanks! We have a lot of fun stuff planned this year.

Love this movie too! You have an amazing memory. Would love to see that behind the scenes footage of Slater "Skateboarding". Haha.

I couldn't find a clip on YouTube of the featurette, but here's a cool big: Tony Hawk interviewing Christian Slater about the making of the movie:

Need to see this one. Sounds hilariously dated.

Congrats on 800 reviews. Love your site, keep up the good work.

It really is, but Gleaming is classic 80s.

Thanks! We appreciate that. Your site is great too.

Completely forgot that this movie existed! Shame on me. Saw it maybe 8 years ago and it's great fun. Congratulations with your 800th review, and keep 'em coming!

Slater at his skateboardin' best. It's definitely worth-watching.

Thanks! We got some fun movies to post throughout the rest of the year.

Oh shit yeah.....I lived in the area of L.A. where they were filming this. Definitely always has been a guilty pleasure of mine watching Slater ride his super-chrome-board in the end. Congrats on 800!

That's awesome you lived there during the filming of this classic. One of Slater's best.