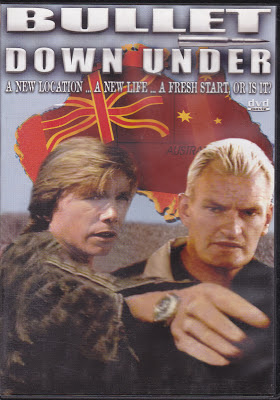 Martin Bullet. That’s really all we have to say. We could probably just end the review right now, because that name alone tells you more about Bullet Down Under than any long-winded treatise would. But lest you think we’re lazy, we shall continue. The aforementioned Bullet (Atkins), whose name takes the cake as far as way-too-on-the-nose action movie names are concerned (and we’ve heard ‘em all - or at least we thought we had - e.g. Anthony Strong, Jeff Powers, John Steele, Mike Justus,  Skylord Harris, etc.) is an L.A. cop who shoots some stereotypical 90’s homies and decides the best course of action after this supposedly tragic event is to hightail it to Australia and team up with hard-nosed, no-nonsense cop Moran (Jacko Jackson, whose name rivals Bullet’s, but his is real!). What then follows includes the fish-out-of-water Bullet and bull-in-a-china-shop Moran tearing up Australia fighting the baddies, who happen to be murderers and gangsters. Will Bullet’s next hit be number one with a bullet? Bullet over to Amazon and find out...

Way before Bullet to the Head (2012), but after Bullet In the Head (1990), we have Bullet Down Under (though to be fair, in most places this movie is called Signal One) - the original Bullet film. The whole outing is very TV-cop style, which isn’t surprising, as this is director Stewart’s only non-TV project. There are plenty of shootouts and car chases, but the plot has a ton of filler and lacks strong structure, as well as a threatening, centralized villain.

Now that the negatives are out of the way, we can concentrate on Christopher Atkins’ leather jacket and sunglasses combo. Obviously he needed to look cool so he could compete with his own name. Bullet, not Atkins. Oddly, the movie doesn’t exploit the name Martin Bullet like it should have. Take Best of the Best 2 (1993) for example. They said the name Brakus like a million times. The name “Martin Bullet” should have been said more during the running time. 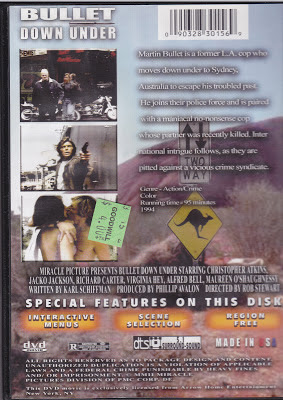 Contrasting with the baby-faced Atkins is the hulking, macho meathead Jacko Jackson. He’s not really known here in America, so after some digging we learned that he is an Australian Rules footballer. Thankfully, he’s also an Australian Rules actor. He seems to be the Australian parallel to our Brian Bosworth, and Atkins the parallel to our Mark Hamill. Pairing the two together certainly makes sense, especially when they’re investigating bootleg boomerang manufacturers (it sounds like a stereotype but this really occurs...we would imagine that is a big problem down there), and getting to the bottom of a very strange band called The Battered Brides that play with cardboard (?) instruments, kind of like the hard rock version of Information Society.

The U.S. DVD is of amazingly, embarrassingly poor quality (the audio is the worst we’ve ever heard - it sounds like everything is coming out of the worst drive-thru speaker you’ve ever ordered a burger through...at any moment you think Jacko Jackson is going to ask you if you want fries with that), and the video isn’t much better, with glaring errors such as Atkins walking out of a room twice (which was quite funny actually) - but we blame Arrow Video for this, not the filmmakers. There are plenty of amusing moments in Bullet Down Under (like the scenes in the classic weightlifting room) - but Arrow seems intent on not letting you fully enjoy them.

We were happy to get a chance to see this, and if you see it DIRT cheap somewhere like a gas station or Goodwill (where we found our copy), pick it up, but the inconsistency of the movie itself, as well as the poor presentation, will rightly scare off many potential viewers.

Email ThisBlogThis!Share to TwitterShare to FacebookShare to Pinterest
Labels: 1994, Bullet Down Under, Christopher Atkins, Mark 'Jacko' Jackson, Signal One

I'm still in shock from 'Martin Bullet.' Nothing tops that. Nothing.

It is an amazing action hero name. Rivals Mike Justus.

'They said the name Brakus like a million times. The name “Martin Bullet” should have been said more during the running time.'

Haha! This is exactly the sort of information I want to know when I'm reading a film review.

I'm digging this page! My dad owns this film, I watched it with him before. It's so over the top it's ridiculous...ly awesome! Haha.

If you wanna chat horror films sometime, come check out my page.

Jilted Barfly: Thanks! We're happy you enjoyed the review. Martin Bullet is such a great name...they barely said it.

Grimm: Haha! That's hilarious your dad owns this. Will definitely check out your site.

Great read. We uploaded some Bullet Down Under clips here.

Your write-up is great too. Love the clips.

I totally agree with you about the quality of the DVD transfer. It's horrid. But it's worth putting up with it just to witness Jacko's buffoonery.

Jacko was great. He should have made more action movies.

They should have had Jacko perform his 1986 classic 'I'm An Individual' at some point in the film. Some great keyboards in that track!

That would have been awesome! The video is great too.