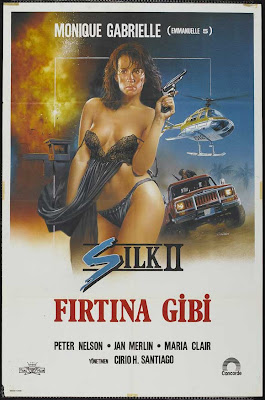 
Jenny “Silk” Sleighton (this time, Gabrielle) is back for this second and final installment. For this outing, the beautiful and tough Hawaii cop is out to bring down criminal mastermind Hancock Gish (Merlin), the interestingly-named art enthusiast whose goal is to steal precious, ancient Japanese scrolls. Silk ends up meeting a spunky tourist, Holly (Claire) and a guy who really hates art forgery, Tony (Nelson) and the three unlikely allies end up working together to stop Gish. In the meantime, Silk does what she does best, take down baddies in her own inimitable way. Will they succeed?

It was a surprise to us too, but, yes, there is, in fact, a Silk 2. Apparently the first one was enough of a success to spawn a sequel, but not successful enough for Cec Verrell, the original Silk. Why they didn’t make it a trilogy remains unknown.

The by-now-well-known Monique Gabrielle steps in, and does a fine job. Her completely wooden, flat affect is a lot of fun to watch, and her outfits, such as an acid-washed jean jacket and matching skirt (or is it stone wash? Not really sure...) complement her beauty nicely and firmly place this movie in the 80’s. It came out in the video store golden year of 1989 - as if to prove the fact that the video store was booming then, Silk 2 is the first of FIVE movies that star Peter Nelson appeared in just that year.

Once again, none of the other characters comment on the seeming misplacement of Jenny Sleighton on the police force, which is good, and the combination shower scene/fight scene is without a doubt a movie highlight. 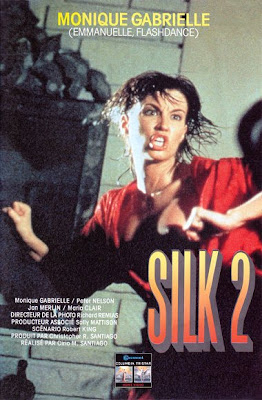 There are plenty of classic cliches that we now know and love, such as the time-honored Wacky Taxi Driver, among many others. It all adds to the sense of fun. Like we’re always talking about, the word “cliche” need not have a negative connotation.

And since this is a Corman production, there are plenty of connections to be made, such as: Sally Mattison is credited as Associate Producer, and she was the director of Slumber Party Massacre III (1990), which featured Silk 2’s Maria Claire. Claire only had a small handful of roles, which is sad, because she has a very winning look and personality. She also chose interesting roles, because besides the two already mentioned, she was in Society (1989), once again a 1989 classic. As far as other cast members go, Avellana plays a guy named Kashi, and based on this we assumed his last name was “Go Lean Crunch”. I think we were wrong.

The movie has a great opening...in fact, it’s the same opening sequence as Silk 1. (This time it’s Arab terrorists, and Monique Gabrielle is fighting them, but still, it’s the same). We still need to see that Silk is a woman of action who takes no prisoners, so...here we go again! Silk 2 is filled with dumb, seemingly random scenes, but it has a lot of blow-ups, stunts, and shooting, with the classic Cirio touch. Whether that’s a good thing or not is only for you to decide. But there are some cool keyboards on the soundtrack, and with an impressively accessible running time of 75 minutes (and that includes credits!), there’s really no reason to avoid Silk 2.

You had me at "combination shower scene/fight scene." And just to show I'm not being overly pervy, some bad ass fights with dudes take place in showers/saunas. Eastern Promises and Maximum Risk come to mind. There's just something about the scenario, fighting while in such a vulnerable state.

That second picture actually makes me want to see it more so than the poster.

Been looking for a copy of this. Silk 1 was some low rent action fun....

If you enjoyed the 1st one, Silk 2 is just as fun. It might be cheap on Amazon.

You can get Silk and Silk 2 on one disc at www.ioffer.com for under 15 bucks.Maybe less than that..

I have been trying to locate it on DVD for eight years. As I don't have a credit card, iOffer is not an option for me. I import through a South African company that deals with Amazon, but the items available on this title there are all VHS last time I checked, and if that isn't bad enough, I would need VHS-PAL. Quite understandably, I have become rather obsessed with my Hard-to-Find quests, forgotten movies (not that old, but they mostly live on only in the minds of the fans of days gone by) and to help rectify this, I've been trying to create pages for them on Wikipedia, with only little success so far, as you need enough info to make a decent entry. To my shame, I do not remember these movies well enough to submit plot outlines, so if anybody out there could assist with a disc or just a chat about SILK 2, feel free to contact RavenGlamDVDCollector@gmail.com and come on, let's hear it for The Good Old Days!