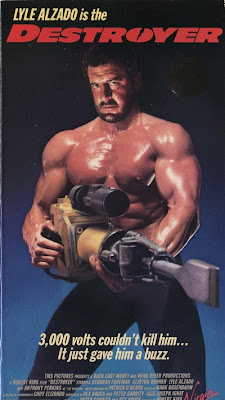 Ivan Moser (Alzado) is an evil rapist/murderer who is in prison and about to receive the death penalty by electric chair. The authorities start the proceedings, but then a prison riot breaks out, diverting their attention. They assumed they fried Moser...but they were wrong! Meanwhile, a movie company begins shooting a film in the abandoned prison where Moser was. Seems like a smart idea. The movie is called “Death House Dolls” and is a women-in-prison flick. Edwards (Perkins) is the forever-frustrated director, and David Harris (Rohner) is the screenwriter and ideal 80’s coolguy. His girlfriend Susan Malone (Foreman) is also working on the film. Harris wants to capture the utter realism of the prison experience, despite the fact that he’s working on what seems to be a lightweight exploitation film, so he ends up butting heads with Warden Karsh (Mahoney) who was there on the night of the riot. But Harris also ends up getting some good info from local chef Fingers (Kristin). Will Moser, who has been presumably living at the prison for the past 18 months, we know not how or why, end up killing everyone in sight?

When we saw the VHS box cover for Destroyer, with a hulking, oiled-up Alzado brandishing a giant drill of some sort, we thought “how can we lose?” - maybe it’s our frame of mind, or maybe it’s due to lack of research on our part, but we thought Destroyer was an action movie. Hopefully one where Alzado “Destroys” the baddies. Not such a bad assumption, but an incorrect one. Destroyer instead is a dreary, inane slasher with problems as seemingly endless as the vast corridors a lot of the movie takes place in. What the movie has going for it are its individual characters. Alzado was great as the psycho killer who’s usually shirtless, Jim Turner is noteworthy as the techie on the film named Rewire, and David Kristin steals the movie as Fingers. The warden, the janitor Russell (Anderson), the young couple portrayed by Rohner and Foreman - who previously were together in April Fool’s Day (1986) - a far more entertaining horror film - together, pretty much any of the individual personages were good, it’s just that the writing and structure of the movie were slow, bleak, and not up to par. And nothing is worse than when they try to be funny. We blame the writers and director, not the actors. 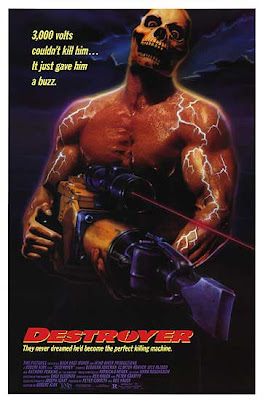 The movie also falls into the typical trap of making the warden supposedly unlikable because he’s an authority figure, but the screenwriter dude supposedly sympathetic because he’s so cool and the warden’s not. Rohner, who has kind of a Johnny Depp meets Charlie Sheen kind of vibe, does indeed have awesome hair (there’s even a fairly substantial scene where he’s washing his hair) - but we were rooting for the warden. There’s also a pretty surprising lack of Alzado - like a lot of movie monsters, you don’t see a lot of him until the end of the movie. There should have been less Anthony Perkins directing the movie-within-a-movie and more Alzado on a rampage. While Deborah Foreman never looked closer to Belinda Carlisle than she does here, Alzado was never closer to John Matuszak than he is here. They have similar builds and facial hair. Maybe it’s a football thing.

As for the boxcover that so entranced us, it can proudly go into the “we pasted the main star’s head on someone else’s body and hoped no one would notice” file. As for the movie itself, it’s not action, and it’s not very horrifying. The individual characters are good, and there maybe a few decent lines here and there, but it’s unlikely too many people will come away very satisfied from Destroyer.

Also check out a review by our friend at The Unknown Movies!

I thought this was a pretty entertaining slasher film and I thought it was pretty funny, it sort of reminded me of Doom Asylum.

Talk about some horrible "photoshop" on that cover. Jeez.

Venom: There were some ok moments here and there, but the film as a whole was weak. It needed more Alzado.

Drunketh Wizard: Haha. It's really bad. Another awful photo-shop job is the cover of Liberty and Bash with Miles O'Keefe. Check it out.

When I was a kid, our local video store closed and the lady behind the counter gave me a whole bunch of posters. This is one of them. Nothing warms a seven year old's heart like a poster of Lyle Alzado oiled up.

I've always been a fan of Clayton Rohner. He's really good in I, Madman and Just One of the Guys too.

Haha! That's a great memory. Do you still have the poster? or do you remember the other posters she gave you?

Also Rohner should have been bigger. His hair was awesome in this.

The other posters (that I still have) were Tuff Turf (I really need to frame that), Avenging Angel, and The Naked Face (with Roger Moore).

Man, that cover would have had me in a second if I saw that on store shelves. Too bad it doesn't sound like the movie lived up to the cover's promise.

We got fooled too! The cover is awesome, the movie is not. Poor Alzado.