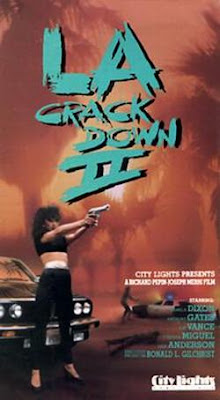 A man named Michael (Anthony Gates) is released from prison and goes back to his old gang of bank robbers. But before he does that, he stops at a quarter-a-dance joint (which apparently still existed into the late 80’s) and picks up a girl. It seems Michael, aside from being a bank-robbing accomplice, is also a mad serial killer slasher, and he’s on the loose in L.A. Seizing the opportunity, the classic police WYC (or White Yelling Chief) sends two female cops, Karen (Dixon, who has an impressive career of PM movies under her belt) and Jamie (Lisa Anderson) undercover as dancehall girls to try and find the killer. After some further confusing twists, turns and interpersonal strife, the truth will be revealed. Dare you see why there is a SECOND L.A. Crackdown?

Pepin, Merhi, and all the other regulars in the City Lights/PM gang are on board for L.A. Crackdown II. Sure, the movie may be lacking the production values we’re used to seeing today, and a lot of the proceedings, especially the acting and plotting are amateurish, but you’ve got to give them credit. They were out there, makin’ it.

You could almost see the struggle and the desire to make movies. Thankfully, they persevered, because PM was one of the giants of the DTV world. But like just about all City Lights movies, it’s not the greatest thing ever produced, but for those interested in a prehistory of PM, it’s still worth seeing. Others may want to pass. 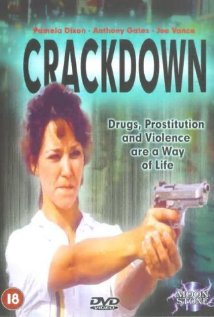 In the positives column, the movie has plenty of 80’s style, especially in the hair and clothes of the female characters. People smoke indoors, listen to their Walkman, and play pinball. There’s a scene in a poolhall when a song very much like Dio’s “Holy Diver” comes on the soundtrack. And if AIP had Zipperface (1992), City Lights has L.A. Crackdown II to counter it. (Fun fact: Actress Denise Ezell is in both movies).

That being said, the plot of a man released from jail and getting involved with a woman who works at a joint where tickets are exchanged for dances strongly recalls the film noir Tomorrow Is Another Day (1951). But if City Lights is going to make a movie that even remotely includes dancing, they can’t possibly hope to compete with their all-time classic Dance Or Die (1987). That pretty much closes the book on City Lights dance movies. And what would Roy Kieffer say?

Featuring the end credits song “Lost In the Night” by Lucy Sustar, which is a movie highlight, L.A. Crackdown II might not be the most substantial movie out there, but it’s a decent example of 80’s independent filmmaking, and it has one very cool moment.