When buddies Ryan Cassidy (Estes) and Bobby Kael (Blake) decide to trek across the country from New Jersey to California in the search for musical stardom in L.A., they truly make a fateful decision when they decide to stop in Trapper County, North Carolina. What seemed like an innocent and uneventful stopover in a small, rural community turns into a living nightmare when they discover that the hamlet is controlled by the maniacal and demented Luddigger family.

However, there is one Luddigger who wants out, a girl named Lacey (Russell). Ryan and Bobby - with the new addition of Lacey, run for the border, but that inadvertently ignites the “Trapper County War”. Soon, a good-hearted local man, a man with the names of two diverse presidents, Jefferson Carter (Hudson) reluctantly joins the fray. As a somewhat troubled Vietnam vet, this newly created “war” is a way to exorcise his demons. Just where local sheriff Frost (Hopkins) stands in all this is in question, but the evilness of good ol’ boy Walt Luddigger (Swayze) is not. Who will come out victorious in this war?

Yet again, the magical year of 1989 churns out another video for the VHS-hungry shelves of the world’s video stores. Amazingly, director Worth Keeter directed L.A. Bounty (1989) the same year. If you must see one Worth Keeter movie from 1989, see L.A. Bounty. It seems he expended all his energy on that one.

While TCW is technically well-made, it’s really just another backwoods bonanza, the likes of which we’ve all seen so many times before. Hunter’s Blood (1986) and Edge of Honor (1991) are versions of this tale that are more entertaining than this one. TCW falls into the classic stereotype of the “city boys” being good, kind and wise, and the country folk as being overalls-wearing dimwits who just want to do bad things to you. To be fair and balanced, the Bo Hopkins and Ernie Hudson characters are not like that, but you catch our meaning. 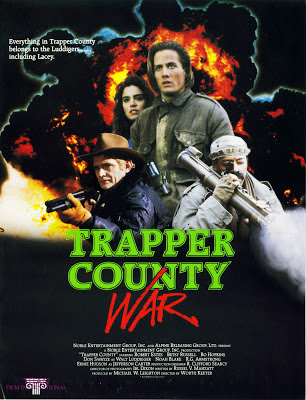 The movie itself is just too “normal”. It’s very straightforward and takes no chances whatsoever. If it just had a little taste of the weirdness quotient, it would have risen up considerably in our minds. But alas, it is slow and standard, and not a lot of exciting stuff happens. But that being said, our two heroes do have a classically 80’s dress sense, with stonewashed jeans being the wardrobe staple.

Their haircuts do indeed say “aspiring 80’s music stars”, so that was appropriate. Of course, there’s yet another Mark Paul Gosselaar lookalike in the Bobby character, played by Noah Blake. Ah, to look like Zack Morris in the 80’s. Apparently it was a popular look, and if you were blessed enough to have genetics that even remotely resembled MPG, the world was truly your oyster. Now just why these two boys would camp out in Trapper County of all places, especially after not receiving the warmest of welcomes, remains unknown.

While it does feature the country-rock stylings of a band called Waycross Express with their songs “I Love My Country” and “Certified Fool”, and Ernie Hudson does his best, unfortunately Trapper County War is just a bit too middle of the road to really please that many people.

Comeuppance Review by: Brett and Ty
Posted by Ty at 8.7.13

Totally agree. This could've been way better. That is a cooler title.

trapper is awesome, I love this flick.

took me ages to get the dvd.

That's cool you love the movie! Where did you track down the movie?