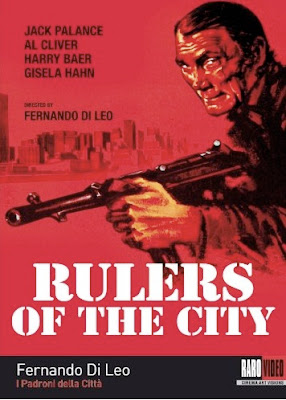 
Tony (Baer) is a young and ambitious guy who is currently working as a money-collector for Mafia boss Cherico (Purdom). But he’s not a bad guy, he dreams of getting out of this racket and traveling to Brazil, a country he’s seemingly obsessed with, probably because it represents his ultimate escape from the grime and seediness of the Italian street life.

His way of achieving his goal is extremely risky: he hatches a plan to steal a ton of money from the most feared gangster in Italy: “Scarface” Manzari (Palance). To execute his scheme, he calls in his buddies Rick (Cliver), and the eccentric Napoli (Caprioli). Scarface is obviously not happy about this so he releases all his goons to stop our three heroes. But is there a personal vendetta between Tony and Scarface? Find out today!

Rulers of the City is an excellent and highly entertaining movie from the golden age of the Italian-made action/gangster drama. Fernando Di Leo is a top-quality director who only now seems to be getting his long-overdue recognition.

Thanks to his skill, the movie is not only well-directed, it’s also well-shot, in the Italian style, with very cool locations and a magnificent score from another underrated genius in his field, Luis Bacalov. Put that all together with some fistfights, shootouts, and car chases, and you have a total winner on your hands. 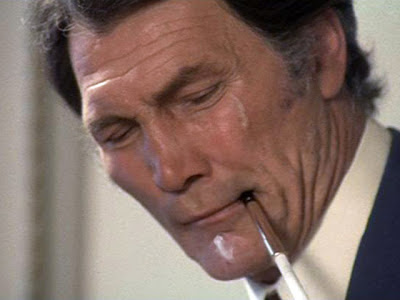 Di Leo was always trying to achieve a certain level of realism in his films, and it is quite fascinating to see the gritty, underground Italian street life of the day. But the movie isn’t without humor, either; it seems no ingredient was left out in its quest to totally entertain the audience, and we respect that. Thus, the movie never stops being good or entertaining.

Even the decor of Tony’s apartment, and his awesome dune buggy provide food for discussion and interest. Naturally, it all comes to a head not in an abandoned warehouse, but at an abandoned abattoir. The ending is great and gives you what you want. It’s nice to feel you’re in the hands of experts who know what they’re doing when you’re watching a movie.

As far as the cast, Di Leo was, interestingly enough, trying to go for an international one with the British Purdom, the American Palance, the hometown Italian cast, and the Germans Baer and Gisela Hahn. Hahn was in a movie called White Pop Jesus (1980), in which the description is “Disco Jesus comes back to earth and takes on the Mafia.” Has anyone out there seen this movie? Can you get a hold of a copy? This seems like something that must be seen.  Digressions aside, the whole cast totally works and it’s a joy to watch.

Now, you would never know any of this if you based your sole viewing of this movie on the Vidcrest VHS or any of the budget DVD’s floating around out there (most of which are under the title Mister Scarface).

To properly see Rulers of the City, you must get the Raro DVD. We had previously seen the Vidcrest tape, but seeing it again in the Raro version was like seeing it for the first time. It’s widescreen with subtitles, and it looks great and feels like a real movie, unlike the dubbed, pan-and-scan Vidcrest abomination. So make sure you see the right version, it makes a world of difference.

We definitely recommend Rulers of the City.

Also check out a write-up by our buddy at The Unknown Movies!
Posted by Ty at 2.8.13

Got the German DVD "Zwei Supertypen räumen auf". Love these Italian Police Movies. Especially the Henry Silva's.
Do you know Live Like a Cop, Die Like a Man aka Terminators, The aka Uomini si nasce, poliziotto si muore? Not a Silva-Flick.

We are a big fan of that movie, and a review is coming soon.