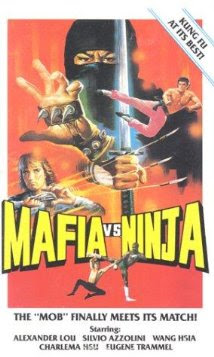 
“The chief is leaving!”


Jack Do (Lo) comes to Shanghai in search of a better life. He and Charlie Wu (Hsu) (after a first initial fight) become buddies, and they land a job working for the benevolent gang boss William Chung (Wang). They do such a good job working for him, his rivals get mad and assemble a team of multi-racial weirdos with special fighting skills to end the competition. When the baddies do manage to dispatch their Master, Jack and Charlie get revenge on these guys one by one. Who will come out on top in this ultimate battle?

Mafia Vs. Ninja is a film whose insanity quotient ticks up as the movie goes along. It starts off as a fairly standard chop-socky production with the all the hallmarks: loud, yelling dubbing, music and sound effects,  fighting, etc. But hang in there, as this movie is like what might happen if Clash of the Ninjas (1986)-era Godfrey Ho directed Kill Squad (1982) or Death Machines (1976). Yes, it’s that fun to watch. 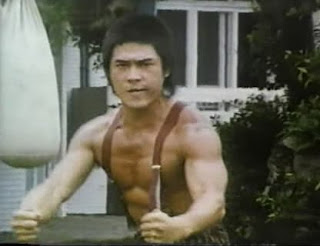 When the team of bad guys is being assembled, it’s truly great: there’s the Black guy, Mr. Jones (Thomas), the Italian knife expert who has an absurd “knife vest” and looks like Johnny Thunders, Nemo (Azzolini), an obese (what looks like) Hawaiian with a Hitler mustache named Woody (???), and of course, the evil Japanese guy (Tang).

After their leader, who is presumably a Ninja but has what looks like a bag over his head with cut-out eyes, gives them their assignment, all hell breaks loose. There are wacky - but high quality - stunts, acrobatics, and  fights, bombs in pears, tree-fighting, dudes fighting in white leisure suits, silly wire-fu, and much, much more. It follows its own nonsensical logic that you just have to love.  It all comes to a very satisfying and enjoyable climax that’s a nice take on the time-honored Final Field Fight. 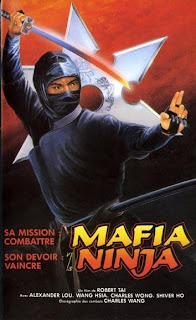 Mafia Vs. Ninja was released on VHS in the U.S. on World Video Pictures in a big-box with suitably eye-catching artwork. And the title certainly will stop you in your tracks as well. Now that it’s been released on a budget-priced DVD, there’s no excuse not to check out Mafia Vs. Ninja.

Also check out write-ups by our buddies, The Video Vacuum and The Unknown Movies!
Posted by Ty at 31.7.13

This was a last minute rental once upon a time, and I ended up re-watching it a lot. A really fun action film.

Yeah, we agree this was a blast to watch and more should know of it's existence.

checked this out after reading a review for it on Unknown Movies.

Same here, had to seek it out, but it was worth it. Love the underground Ninjas.