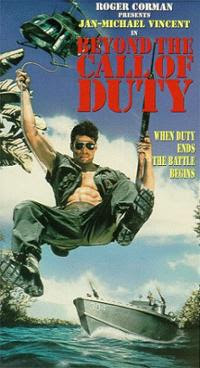 
In South Vietnam, 1975, the war is winding down. However, ex-military man Len Jordan (Vincent) is “waging his own war in the Mekong Delta!” (to take a quote from the movie). Along with Lt. Henderson (Lottimer), and some other soldiers, Jordan heads a crew on a boat heading down the aforementioned Delta. To increase the danger and risk, the men are escorting a nun, a gaggle of orphans - including the precocious Mickey (Redillas) who warms the hearts of the hardened soldiers - and filmmaker Mary Jackson (McWhirter), who is making a documentary on Jordan. Will this boat trip dock successfully?

Cirio never seems to tire of the jungles of the Philippines, so here we are again with yet another shoot-fest with some exploding huts and helicopters on the side. We suppose this outing is a little different, because it involves a boat and is a little more aquatic than most other ‘Nam jungle epics, and the kid that plays Mickey is actually very good and steals the movie, but this doesn’t offer all that much new to the “jungle slog” genre.

The film features Philippines mainstays Henry Strzalkowski and fan favorite Nick Nicholson (in a criminally tiny part), as well as Jillian McWhirter, who’s no stranger to the DTV world, having starred the fellow Corman title Hard Way Out (1996) as well as PM’s Rage (1995) and the excellent Last Man Standing (1996). McWhirter puts in an especially P.J. Soles-like performance as the documentarian. What’s good about her role is that it’s not another stupid reporter, like so many of the token female roles we see. There’s actually a bit of substance to her character. So she was probably happy about that.

Even though he single-handedly takes on half the VC, and they all have machine guns, somehow NONE of them can hit the only dude out there with blonde hair and a blue tanktop. Sure, he wears the blue tanktop for 98% of the movie’s running time, but hey, once you’ve found perfection, why mess with it? Plus, JMV looks jaggedly - even randomly - cut into the footage of this movie. The fact that it was edited from Nam Angels (1989) might explain that.

Additionally, the sound quality of this movie is not good. Add to that a blurry-sounding VHS tape, and a drunken JMV slurring his speech, and most of what he says is not comprehendable. He’s about 10 times more unintelligible than Mako, but English is JMV’s first language, so what’s his excuse? And don’t say alcohol. But we don’t mean to beat up on the guy. We love seeing him, and we especially love his more besotted roles, which this one seems to be.  You cannot do today what JMV did. He truly is one of the last of the “man’s man” actors.

So while Beyond the Call of Duty lacks originality, a strong, central villain, or JMV parachuting out of an airplane on the box cover (couldn’t they at least have super-imposed his head on the cover model’s body?), there might be barely enough meat on the bone for fans of JMV or Cirio to check this one out, but don’t spend too much money doing so.

Thanks for the tip about the exploding helicopter. I'll be adding it to the list of films I need to review.

I love the title to this film. It's actually quite a deep philosophical question.

What is Beyond The Call Of Duty? The call of duty is powerful enough, but they've gone beyond it. They've taken the call of duty taken to a whole new level. I can't get my head round it. But it's big and it's deep. No wonder Jan Michael Vincent squints so much. His mind obviously been blown by the concept too.

This is one of my Santiago faves. It's so OTT that it's impossible to take seriously, but that just adds to the mood. "...the men are escorting a nun, a gaggle of orphans..." Heh, they could remake it as a comedy, call it Boat Trip and it would be a sure-fire hit. My take on JMV's squinting: he's trying to read his cue cards!

Haha! Boat Trip with Jan Michael Vincent instead of Cuba Gooding Jr. That would've been brilliant.

I knew you fellas would review this one. Been waiting for it. Movie's not bad. And it's not great. Just like JMV's performance. Loved/Hated the ending. Never saw it coming.

Excellent review. I've always looked at this movie as a sort-of sequel to "In Gold We Trust" being a JMV Vietnam movie released a year later. Jan-Michael was, like in "Hit List", a complete mess. Maybe even worse. He was bare foot half the time because his feet were too swollen. He's almost ways photographed from the knees up. And the production had crew members who, out of camera range, had to hold him up because he was too drunk to stand.

Poor Jan-Michael Vincent. If he wasn't an alcoholic, he could still be working today. He was pretty good in In Gold We Trust...but Sam Jones was at his absolute best.