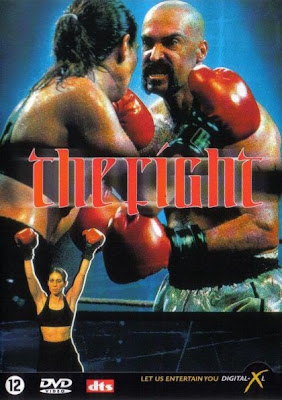 
Simon Penn (Sandler) is a terminally depressed former kickboxer and now trainer. He feels a lot of sadness and has some regrets about his life as a fighter, one of which is the dissolution of his relationship with his wife Jenny (Amendola). He tries to channel his negative feelings into positive ones by training and mentoring children. His partner running the dojo is a woman named Cathy Jean “CJ” Keyes (Isenberg).

Because of traumas in her past, she decides to put herself to the ultimate test: fighting a man in the ring. But not just any man, the brutal Killer Kuzinski (Denney), a man who has killed two men in the ring, and who has a tumultuous past with none other than Simon. So she trains hard and both she and Simon fight their inner demons along the way. Then fight day arrives. What happens next will change everyone’s lives forever. Who will win THE FIGHT?

The Fight is an interesting little movie. It’s highly dramatic, even melodramatic at times, and feels like it potentially could have been a play. It seems like it was made by people more interested in creating high drama than a Martial Arts film. For a low-budget independent movie about broken people trying to find solace in a harsh world, and using Martial Arts as a vehicle to do that, The Fight does stand out among the myriad Meathead movies. 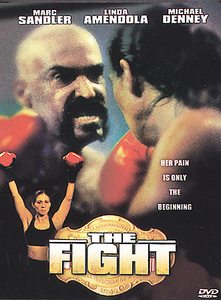 Just the fact that the title of the movie was changed from Shadow Glories - which is a more evocative and appropriate title - to the dumbed-down, bland and forgettable “The Fight” tells you all you need to know, really. The movie seems to be a labor of love from all involved, especially Marc Sandler. We were unfamiliar with his work prior to seeing this. He resembles James Gandolfini and always tilts his head down.

It’s mainly during his overly-heartfelt voice-over narration that the movie seems like it’s trying too hard to be gritty, or just trying too hard in general. Plus at almost two hours, the movie is far too long and overstays its welcome. There’s only so much goodwill this movie can hope to have, and by trying our patience with an extended running time, it expends its capital with the audience. How much time are we supposed to want to spend with these troubled people and their sad lives?

Fans of more traditional action movies (like us) will find the pace slow, and the copious use of slow-motion only slows things down to a crawl even more. But the movie predated Million Dollar Baby (2004) by a solid three years, and Sandler (who we are guessing isn’t related to Adam...or maybe just hoping) has a great yell.

Killer Kuzinski, not to be confused with Killer Kowalski, or Unabomber Ted Kaczynski, is an appropriately evil and heartless man, unafraid to be put in the impossible position of fighting a woman in an exhibition bout. If he wins, he looks like a jerk, if he loses, he was beat by a girl. But perhaps CJ’s mighty cry - from a crowded audience - of “I can beat you!!!”, which he somehow heard from the ring, really got to him.

A movie highlight occurs when two elderly men in Karate Gi’s have a conversation. They don’t seem like guys that would be wearing those outfits or be in a dojo. It looks like two grandfathers named Sid and Morty and they should be at a deli discussing Matlock. It’s a funny scene, watch out for it.

Shot in Lewiston, Maine, The Fight is something of an oddity. There’s too much drama for your standard Punchfighter (or almost-Punchfighter), but too much hand-to-hand combat for patrons seeking a standard drama. It seems only very specific audiences will warm to The Fight.