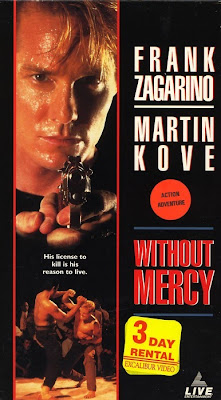 
John Carter (Zagarino) is an ex-Marine, ex-’Nam vet and ex-UN soldier who is now living in Indonesia scraping by as a Punchfighter. He gets wrapped up with fight promoter and all-around jerkwad Wolf Larsen (Kove), and his girlfriend Tanya (Azhari). Going into Larsen’s world proves to be dangerous and now the two men, in some sort of love triangle, have to fight it out for Tanya. Who will win? Who will care?

The “Low-rent Lundgren” himself, Frank Zagarino, returns in this typically lackluster effort. Sure, the beginning of the film may have the classic “flying sideways while yelling and shooting” move we all know and love, along with an exploding helicopter, but the movie as a whole lacks excitement and never seems to get off the ground.

The pacing is off, the energy is not there, and the whole exercise is paint by numbers. The whole plot of a guy in a foreign country scraping by fighting seems very familiar, but then that whole aspect of the plot seems to just fall away. There’s also the prerequisite torture scene, but for some unknown reason, Zags had to be naked, and that’s just more Zags than we needed to see. 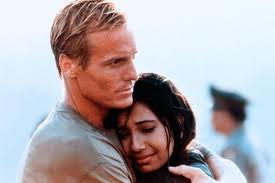 Without Mercy appears to be Zags’ first Punchfighter, if you can call it that. After this, he never really went down a Punchfighting-based career path. In the movie, they even call them “Kumites”. But he seems to have met his match with Martin Kove: they were both Marines, both Vietnam vets, and they both have names made famous in other movies (Zags is the ORIGINAL John Carter. Disney should have noticed this, because he’s just as flat, boring and uninspired as the multi-million dollar version. Kove plays a man named Wolf Larsen, and the producers should have known about the Expect No Mercy, 1995 star - even if he spells it Larson with an O. Interestingly, Expect No Mercy and Without Mercy, though similarly titled, both came out the same year). 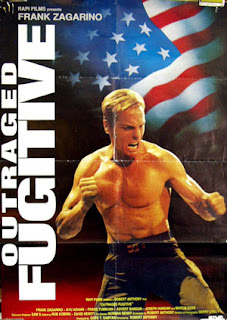 Though we don’t know who created the song or what its title is because it receives no credit, the main theme of the movie seems to be called “Lost In A Foreign Land”. The makers of the song seem heavily influenced by The Police. It’s played more than once, just to really emphasize that the blonde, blue-eyed Zagarino isn’t a native Indonesian.

Nice write up. Shame it's not better as I love Martin Kove.

By the way - I love the exploding helicopter tag you've added. Very helpful for my work documenting all these important films. Helps me find new films to review.

Thanks! This should've been better with these two guys.

Happy to help you out, we put the tag there as an homage to your tireless work!

This is my favorite Zags movie. I think it has a lot going for it: lots of action, exotic locations, lovely leading lady, and a quirky performance by Kove, who even manages to make the villain likable. Rapi Films from Indonesia also made another classic: Blood Warriors with David Bradley. But as I said in an earlier comment, I may be the only one who likes Without Mercy.

Zags was hilariously wooden! Happy you enjoyed it. Striker is another Zags classic.

Will have to check out Blood Warriors. Always wanted to see that one.